Now that I am a comfortable guy and know who I am, I can come out to the crowd every night in concert. 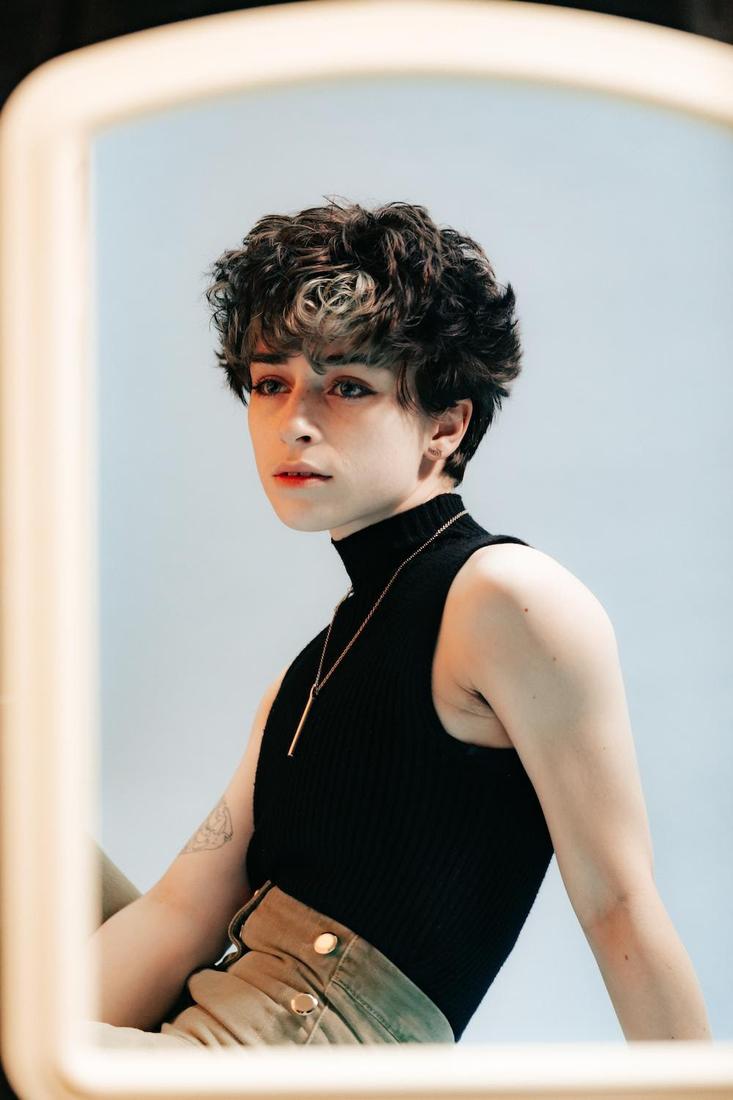 Singer Addison Grace is currently out on the road building up a following after becoming popular on the social media platform TikTok. The nonbinary songwriter plans to drop a new EP titled Immaturing on May 6. Songs like “I Wanna Be a Boy” and the current track “Getting Used To” have hit home with listeners who are ready for more.

The 21-year-old performer talked backstage recently at The Riviera Theatre before a concert in support of Cavetown in Chicago.

JN: (Jerry Nunn) Start off with your identity.

AG: (Addison Grace) I identify as a trans man who is nonbinary and also bisexual. I am part of the LGBT community and have checked every box at some point.

JN: Awesome! Where are you from originally?

AG: I was born in California and I lived there for a little bit as a kid, but I grew up in Utah. I had a stereotypical California family that lived in Utah, which was weird just because my family was not like the other people living there. We were raised differently and open to choosing what we wanted. I was lucky to have an open-minded household and a family that was so supportive.

It was a very different story for my peers and high school friends at the time.

JN: I appreciate that Imagine Dragons’ Dan Reynolds held a Loveloud Festival there supporting the LGBTQ+ community in Utah.

AG: Yes, it is getting more progressive there. I think it is because people are staying there and not moving to force the environment to change.

JN: Do you people call you “Addie?”

AG: Yes if they know me personally, musically people know me as Addison.

JN: You worked in a retail store before your music career?

AG: Yes. Music wasn’t paying the bills and I was hesitant to go to college. I was a full-time cashier/manager at a retail store. I would close the store and race to a coffee shop to perform a song or would be recording before my shift. I worked both until music could finally support me.

About halfway through 2021, I was finally able to call music my full-time job!

JN: What a moment for you that must have been.

AG: I screamed and celebrated when I got the call from my manager to put in my two weeks notice for the retail job.

JN: You deserved it after all that work.

AG: It was four hard years of retail. I think it was good that I worked that job so I could have the experience of having a regular 9 to 5. This has helped me focus on what I should be doing.

JN: “I Wanna Be a Boy” is what you should be doing with such a gut-wrenching track.

AG: People relate to it in such a raw way. I wrote it for me because I didn’t feel myself in a female body. It can mean a lot to people who don’t feel right in their bodies.

My cisgender girlfriends have told me they wish they could be a boy sometimes because they experience so much misogyny and there are many ways to relate to the song.

JN: Some artists don’t like to explain their songs as it can mean several things.

AG: I will tell people why I wrote it but it does not have to mean that to them.

JN: How hard is it to play live and connect with the audience?

AG: I was absolutely terrified to play it live because it is coming out to 3,000 people every day. People have told me that they didn’t know who I was before they heard it and now are crying because of that song.

It has turned into an empowering shout from the stage. It is my moment to say what I need to say. People need to listen whether they want to or not!

JN: There are certainly a lot of people who need to hear it.

AG: I have seen parents connect to it and will finally understand their children after hearing it. All types of people relate to it because it is a common feeling to feel out of place, whether it is in a body or society.

JN: I was reading your YouTube comments under the video and people seem to respond positively about it. Keyboard bullies can sometimes be cruel on YouTube.

AG: I still get some tough comments on there but they get swallowed up by the good. I think that is a very rare blessing to have.

JN: Do you perform any cover songs in concert?

AG: Yes. During this tour, I have been doing “Graceland Too” by Phoebe Bridgers. I am obsessed with her lyricism and the way she words things.

I admire lyrics most because I started off as a singer rather than someone who played an instrument. Her song speaks about my music journey. I even have a lyric from the song tattooed above my knee!

I love the line “She lived through it to get to this moment.” The younger me who still thought that they were a girl lived through all of that confusion. Now that I am a comfortable guy and know who I am, I can come out to the crowd every night in concert.

JN: There are so many LGBT artists that are coming out right now. I hope music label reps learn that gay interviewers like myself should be the ones to interview them.

AG: I hope we get to a point where anyone who is straight can understand it, but I think they can only understand to a point if they are not part of our community. That goes for anything!

JN: Playing off of your song “Getting Used To,” what are you getting used to these days?

AG: Because my Internet fame blew up during the pandemic I am getting used to people knowing who I am or being excited that I exist.

In my head, I am a random 21-year-old from Utah who just happens to make music. To other people, I am more than that to them. That means a lot. I am too humbling of myself at times.

When people sing along to my songs or sneak a photo of me it is exciting but I have to process that I finally am a musician. [laughs]

JN: You have to get over that imposter syndrome and insecurity.

AG: Yes, it is all sorts of crazy.

JN: How is it touring with Cavetown and Tessa Violet?

AG: They are so accepting in so many ways. I don’t think there can be a better tour group. I have heard stories about there always being at least one person that doesn’t vibe or accept others, but everyone out here has respect for people however they identify and are kind to others.

I have had times where I will almost cry and they all hug me. It feels like a tiny family. I was scared to go solo and be the opener, but I never feel alone in this.

JN: Just from me seeing the crowd waiting in front to come in I could tell they are going to be supportive of LGBT artists. Did you make your music videos at home?

AG: In the past, it was me and my iPhone with three friends making videos. I learned how to edit after figuring it out. I had made TikTok videos for a while before that.

“Makes Me Sick” was the first time where I was just the musician and didn’t have to be the director and film the video. It was a small group, but they put so much work into it. I flew out to Detroit to make it. I am very proud of that music video as I feel it’s my first professional one.

JN: Playing off of that what makes you sick these days?

AG: A lot of things! I try to be positive and ignore the bad but it is so good to have these conversations. We need to talk about problems but not let them consume our lives. That will depress you and destroy you from the inside.

There are a lot of issues that I care about like global warming and the insane amount of attacks that are happening to transgender kids around the country. It is heartbreaking and still hurts even though it is not affecting the state where I live now. It is saying that someone does not deserve to feel comfortable in their body. I want to be able to be a voice for those kids.

JN: What advice would you give a person starting out on TikTok?

AG: I would tell them to be careful. I feel TikTok is the most brutal place on the Internet. We go through phases where one platform is the one everyone is using. TikTok has been the frontrunner for right now. It is the greatest and worst place to be for a content creator. You can blow up instantly for being yourself and go to a big audience. I have never seen an app that will make people go viral so fast. It is similar to Vine or YouTube but nothing really compares to it.

People should distance themselves from the comments and understand that people will say absolutely anything. I have never gotten harsher comments than from TikTok. I encourage comment filters.

JN: How can you go through so many comments to delete them?

AG: I put filters on them with things I don’t want to hear about. TikTok makes it where no one can see that. I will block out a lot of words that I might get called before it happens. That has been helpful to me and kept things nicer.

You can be anything on TikTok. It is a short video platform. There is a place for everybody on there.

JN: Last year at Lollapalooza there were a lot of performers from TikTok. It was hard to tell who would be the next big thing.

AG: People have made themselves popular in ways no one could have predicted. The Internet is such a tool for that. It is amazing and also terrifying!

JN: What do you say to other LGBT folks that want to come out?

AG: Make sure you are in a safe space. I knew my family was accepting because it had been a topic before that. My mother said if any of her kids came out that she wouldn’t kick them out of the house. It was established in my household that I would still be loved. It doesn’t get any less scary, though. It is intimidating no matter what.

I would love to get to a point where no one has to come out. Since we still have to, I think talking about queer subjects or celebrities is a good place to start.

If people wait to get to a safe space there will be people who will accept and love them. I am a big believer in choosing your family and your family isn’t just blood. It’s lucky if you have both, but at the end of the day, you choose your family!