New songs and old songs: an interview with Howard Jones

You want to be striking out in a new direction. That’s the way things move forward. 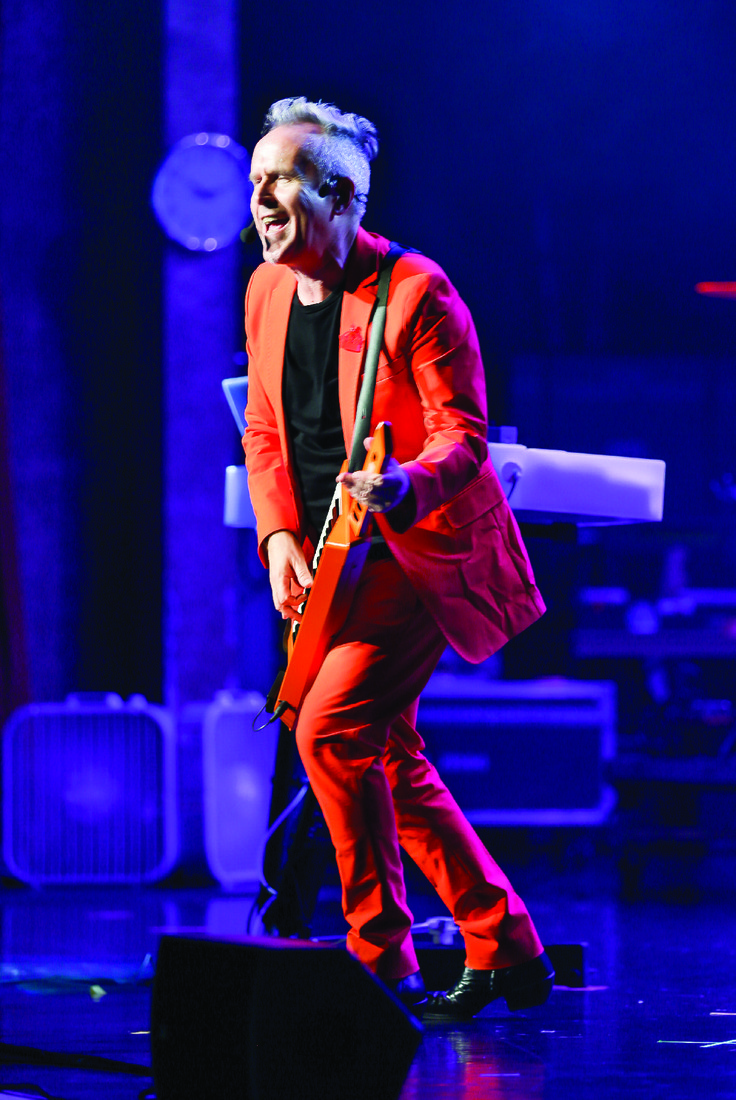 What’s the first thing that comes to mind when you think of the longstanding British new wave musical influences of the 1980s? The holy trinity of The Cure, Depeche Mode and The Smiths? Of course, you’d be remiss if you left out Howard Jones. A vocal presence since the early 1980s when his first hit single “New Song” was in rotation on the radio and on MTV, Jones lived up to the promise of that track with a series of unforgettable singles. Songs such as “What Is Love?,” “Things Can Only Get Better,” “Life In One Day,” “Everlasting Love,” and his biggest hit, “No One Is To Blame,” established his lasting legacy. Not one to sit on his laurels, Jones continues to make music to this day, including songs heard in the 2016 Hugh Jackman film Eddie The Eagle. I recently spokewith Jones, who is currently on a US concert tour, about his career and more.

Gregg Shapiro: In “New Song,” your first single as a solo artist, you sing “I don’t want to be hip and cool.” But, in a way, that happened regardless because of “New Song” and your music which was very much of the `80s new wave moment. Do you think that’s a fair assessment?

Howard Jones: Yes. We were doing something different. We were using new technology. We were using video. It was new, and I guess, quite cool and hip [laughs]. But it wasn’t the intention to do that. It happened by accident.

GS: Speaking of “New Song,” it was heard in an episode of the popular Breaking Bad series. As a musician, how do you feel about the way songs, old and new, are increasingly incorporated into TV shows and movies, usurping radio as a means of introducing listeners to music?

HJ: I think it’s part of music being sidelined quite a bit, to be honest. Music is now co-opted into other art-forms, whereas it used to be its own thing. Now music is just associated with other things. What you said is just another example of that. It’s just the way it is. I don’t think there’s anything that can be done about it. The focus has gone away from the audio side, from what music can do for you.

GS: Echoes of `80s synth-pop and new wave continue to be felt today, especially with the popularity of Electronic Dance Music. What does it mean to you to be a part of the musical legacy that played a part in launching that trend?

HJ: [Laughs] Obviously I had no conscious awareness of doing that. I just loved the new technology and I wanted to make sounds that people hadn’t used before. I wanted to use it in pop. I really didn’t think any further than that. What happened was that loads of young kids went out and bought synthesizers and drum machines and started making music in a very different way. That evolved into electronic dance music. Right now that’s a massive scene which has its own momentum. I’d grown up with songs and that kind of thing. I wanted to something with these sounds and invent new ways of playing it live. I was trying to do something different. I suppose it did contribute to people being interested in the new technology.

HJ: I really like an American artist called BT. I’m a huge fan of his and I think he’s super talented and wonderful. Cerdri Gervais recently did a great remix of “Things Can Only Get Better,” which I really like. People [laughs] do send me requests. I don’t really have many people remix my stuff because I’m not keen on a lot of it. I wait until there’s somebody I really think is good and then I work with them. I very much like to do things myself. I work with a small team of people. I get offered lots of things to work with people outside, but I want to do it in my own way. I feel I’ve earned the right to be independent and enjoy that independence. Set the agenda and the direction and go for it.

GS: With nine full-length studio albums to your name, do you have an all-time favorite?

HJ: [Laughs]. No, I don’t. That would be impossible for me to say. They’re all very different, that’s for sure. I used the opportunity to make a new record to try something different and work in a different way and try and learn new things. They’re all part of the picture, really. I really do love them all, honestly. Otherwise they wouldn’t be out there.

GS: Some of your biggest hits, including “Life In One Day,” “Things Can Only Get Better,” “No One Is To Blame” and “What Is Love?,” could be considered “advice” songs. What’s the best advice you were ever given?

HJ: [Laughs] I suppose one of the things you could say is that in those songs I’m probably talking to myself just as much as to anyone else [laughs]. There’s a lot of sort of self-therapy going on there. For me, it was always reacting to something, rather than taking advice. I always thought it was very important to be yourself and do what you do. It doesn’t matter what other people do. They do what they do. Only one person can do what you do. I don’t know where I got that philosophy from as a young person, but I definitely live my life like that. I was always trying to be different to what other people were doing, especially as an artist. You don’t want to be copying people. You want to be striking out in a new direction. That’s the way things move forward.

GS: As an artist who tours regularly, what do you like best about the live performance experience?

HJ: Live performing is dangerous [laughs]. It’s very much in the moment. You have to be on your game all the time. If it goes wrong [laughs], it’s up to you. It’s about risk-taking and enjoying that. It’s life on the edge a bit, really. Even though you may have done this for many years, you still get nervous. “Suddenly, tonight, it’s all going to go wrong! I won’t be able to sing! I won’t be able to remember anything!” I enjoy that walking on the edge; it’s exciting. It’s a great way to live.

GS: In addition to hits and fan favorites, have you also been incorporating music from Engage in your sets?

HJ: Yes. When I get to do my own shows, which I’m doing quite a bit on this tour, there’s new music from Engage. There’s also brand new music from the Eddie The Eagle film for which I wrote I couple of new songs , that I’m playing. It covers the whole career. I think it’s important to be playing new things that you’re doing, as well. It would be wrong not to play all the big hits. People really want you to do that; I totally get that and I enjoy it.

GS: Speaking of touring, I understand that you did a tour with Andy Bell, Erasure’s gay front-man, a few years ago. What was that like?

HJ: It was great! I love Andy. He’s such a lovely man. We got on very well together. I’ve been seeing him a bit more recently. We did that tour together and I see him at the English festivals that we do. He also had a track on the Eddie The Eagle film. I saw him at the launch of that. I think Andy’s brilliant!

GS: Are you aware of your own following in the LGBT community?

GS: Finally, the question that is on many people’s minds – do you still think “no one is to blame”?

HJ: [Big laugh] The way I try to live my life is that I am responsible for what happens in my life. I don’t look to blame other people and things outside of myself. It’s my life, it’s happening to me, I’m responsible. That still works. No one is to blame, except me [laughs].