Everyone should do what they can to try to live authentically within themselves and be unafraid of their truth. 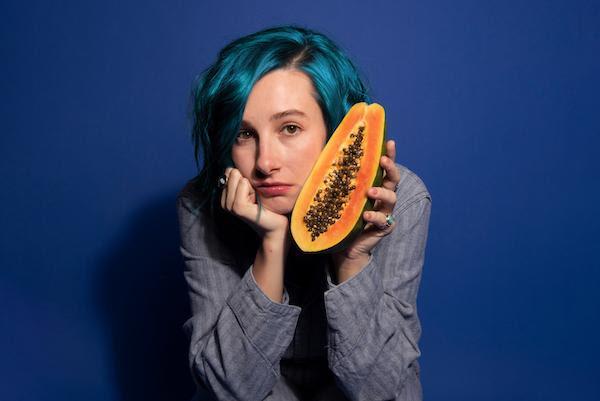 Slothrust is a band from Boston, Massachusetts consisting of Leah Wellbaum on vocals/guitar, Brooks Allison on bass and Will Gorin on drums.

On their latest record Parallel Timeline, this alternative band explores improvisation and interesting topics. They take these tunes on the road to places like Lincoln Hall where Wellbaum spoke backstage before the show.

LW: (Leah Wellbaum) She/they are my pronouns. I identify as queer and gender fluid.

LW: I grew up going to a lot of punk and hardcore shows. Boston had an amazing DIY music scene that was in surprising places that were willing to host live music. I could live music multiple times a week there if I wanted. That was a privilege and foundational in the type of music that I play and the way I approach live performance.

JN: Who were some of your favorites?

LW: I went to so many concerts growing up. I listened to really heavy bands like Daughters, The Locust and Converge. Melodically I liked Regina Spektor, Bright Eyes and Rilo Kiley. I haven’t seen Fiona Apple in concert but I love her.

JN: She played in this venue. I was there!

LW: Really? She is a really big deal to me.

JN: Where did the name Slothrust come from?

LW: I had a band in college called Slothbox and our name evolved out of that. That project was much creepier and incorporated old Casio keyboards.

JN: Do you want to be a solo artist or are you more comfortable in a band?

LW: I write a lot of different types of music and always have projects going. I have a project called ANMLPLNET [pronounced “animal planet”] which is with improvisation and I am really passionate about it.

I also play live for yoga meditation classes. That I sometimes over an hour of improvised guitar with soundscape and ambient types of music. I have not released it as a recording but have been working on it for a while. I want to make that record in front of an audience because improvisation is important to me. In those settings, I am reading the room’s energy and playing based on that. Recording in a void is not particularly appealing but I haven’t figured out the right setting to record in. I even have the domain name for the project but haven’t announced it yet.

JN: Do you keep the same setlist when out on tour or do you like to change it up?

LW: We do a combination. On this tour, we are doing a lot of the same setlist because we want to get the new record out there. With that being said I call audibles all the time and play what I feel called to play. In the end, you have to play what you feel most authentic about and most present with. That is what people will respond to and feel vibrational.

JN: So being out as a musician is part of that?

LW: For sure. Everyone should do what they can to try to live authentically within themselves and be unbraid of their truth. That is easier said than done. Once you are out of the closet there are so many nuances to that, maybe not even related to queerness. It takes a lifetime! [laughs]

JN: It must be tough out on the road to be queer sometimes.

LW: I am really blessed to say that the majority of people on this tour are queer people. I think this is one of the first tours where that is the case. I do love it!

JN: I saw you collaborated with bisexual rocker Lzzy Hale on Parallel Timeline.

LW: Lzzy is rad and one of the bravest artists I know. She has a really diverse fanbase which is not true of a lot of artists. Slothrust has a very liberal fanbase and I am grateful for that.

Lzzy has a mixed fanbase but is still unafraid to speak her truth and be exactly who she is. She is in a power position because she can reach people who are not reached by other voices. She encourages people to lead with love and be more open-minded. She is bold and fierce!

JN: Queer people are coming out in bold ways and I don’t think straight people are ready!

JN: Did you make the set for this tour?

LW: Yes and it is my first time doing set design in any capacity. We brainstormed it. The large moth puppet is named Bambi. We commissioned her at the top of the record cycle so we could have her be in all the music videos. I am so happy to have her with us out on the road. She’s a delight!

JN: I love the rainbows on the merchandise. That is representation!

LW: Absolutely. I did all the creative direction on this record because we had so much time. I thought deeply about it. I am really into hypnotism and optical illusion. It is an inverted rainbow. If you stare at it and then look at a blank wall then your eyes invert the colors. What you will see is a typical rainbow. It is a commentary on what we see and how we know if what we see is real.

JN: My mind is blown!

JN: Have you always been this creative?

LW: Yeah, I have always been a freak for color. I make a lot of art and I am obsessed with markers. It has been fun to lean into that during this cycle. I keep the channel open for any visuals that come through.

We exemplified this rainbow in the first music video we put out called “Cranium.” I did this thing with my hands to signify a rainbow that was digitally composited onscreen to appear. If you watch it then you can see the inverted rainbow.

JN: I noticed the hand choreography in that video. Do people tell you that you sound like Florence + the Machine on that track?

LW: I have heard it a few times and I even met her in London. My partner’s cousin owns a restaurant that she visits often and she sat down next to me one time. She had heard I am a musician and wanted to know the name of the band. She said she loved the name Slothrust. I was so happy to hear that!

Thank you for the comparison. I would love to play with her someday. She was very nice.

JN: How would you describe your music to someone who has not heard it before?

LW: It is dynamic alternative rock music steeped in poetry and ecosexuality.

JN: Where was the laundromat where you filmed the video for “Double Down” located?

LW: It is in Highland Park, Los Angeles. That laundromat is in a lot of different TV shows.

LW: Yes. We played Lollapalooza one year, but we haven’t been back in a while. We hung out at Chicago Music Exchange one day and they were super nice to us.

JN: You are into astrology? You have the track called “Strange Astrology.”

LW: Yes, for the past year I have been writing a monthly column on fruit and astrology for a publication called Talkhouse. I am obsessed with fruit, but astrology I have only studied for the past few years. I am far from an expert on it, but it has been cool to learn about it and see it as a tool to utilize for self-reflection and examination.

JN: Why did Parallel Timeline sum up the album for you?

LW: The song Parallel Timeline summed up where I was at in life. I was trying to be my best self and trying to be more honest with myself than I had been in the past. I realized life can shake out in so many different ways. Be grateful for what is showing up at the moment because you never know what is going to come next.

JN: That applies to a pandemic that showed up right?

LW: Yes. It is interesting because I wrote the music before the pandemic and then it gave predictable vibes on that track and a few others.

JN: Are you planning on playing at any Pride festivals?

LW: Yes. We are going to play Pride in West Palm Beach, Florida and possibly a Pride event in Hudson Valley in August. We are going to Europe for a month of tour dates and then touring America again in October. We would love to play more Pride events!