These days, 10-year-olds know their all their angles. 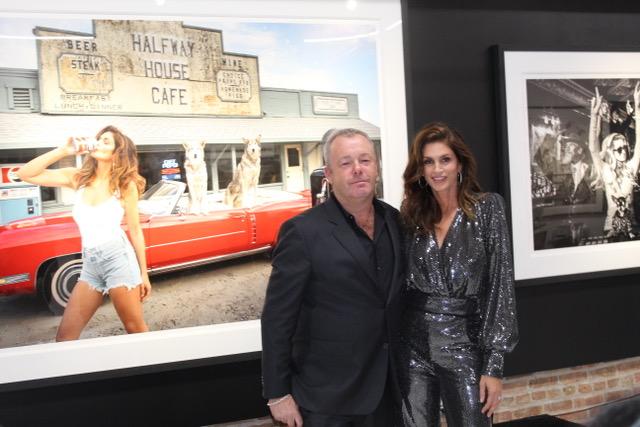 Legendary model and actress Cindy Crawford is a hometown hero for Illinois. She was born in Dekalb and graduated from high school there. She went on to study chemical engineering at Northwestern University briefly before pursuing her successful modeling career.

British photographer David Yarrow is known for his work with wildlife, indigenous settings and landscapes. He teamed up with Crawford to create new pictures for an important charity. Housed at Morgan Arts Complex at Hilton Asmus Contemporary in Bridgeport now until January 2022, this massive exhibition is benefitting the University of Wisconsin’s Kids Cancer Program and the American Family Children’s Hospital in Madison, Wisconsin. Crawford’s brother Jeffrey died of leukemia at a young age, so this cause is near and dear to her heart.

The two spoke briefly before dinner at a recent fundraiser at the gallery surrounded by their work.

JN: (Jerry Nunn) How did the concept of the Pepsi photo come to fruition?

CC: (Cindy Crawford) David had the idea of creating that iconic Pepsi spot with a David Yarrow twist. The only way to do it was to go to the same location and add elements. I have been in the car, but it is not the original used in the commercial. There were no dogs in the Pepsi commercial. There were two little boys.

I like the fact that it’s a celebration and a nod to the original.

JN: David, what is it like to take pictures of Cindy?

DY: (David Yarrow)You have to be on your game. You can’t mess up if you have this girl on the other side of the camera. I think we are all at our best when there is a little pressure.

JN: How many free Pepsi products have you received over the years and is it all over your house?

CC: That wasn’t really a thing back in the day, but I will say that if we are going to drink a soft drink, we are definitely a Pepsi family.

JN: They always say don’t work with animals and children. Are there any stories about the animals in the photographs?

DY: Over the years we have gone from using real wolves to these Tamaskan dogs. They are 99% wolves and originally from Finland, but not actual wolves.

There are two reasons for that, in 2021 attitudes have changed in regards to the exploitation of animals. We don’t want something involved with the charity to be soiled by that.

It was quite fun in the old ways when we did use real wolves because Cindy is quite scared of dogs. These are massive wolves and I was trying to attract the wolves with some chicken. It was about minus 15 degrees.

The wolf wrangler mistimed the throw and the frozen chicken hit Cindy in the car. It was early in our relationship and she said, “David, that’s not appropriate.” Never were there truer words said!

CC: When David asked me to shoot with him the first time, I knew there would be wolves there. I thought they would be trained like movie wolves, but you can’t train wild animals. The handler knew what to expect, but it was not like a movie dog that knows to go sit on a mark.

It definitely leaves room for a little bit of excitement.

JN: What advice would you give people about modeling or photography?

DY: As far as photography, be very tough on yourself and be your own biggest critic. Look at the work of others. Ansel Adams always said it is about the heart and the soul. Be a sponge and work with others.

CC: For modeling, I am not sure in this day and age that I am the best person to give advice. When my daughter first started modeling people asked me if I wanted her to be a model. I said that every young person is a model in real life now because of their Instagram. These days, 10-year-olds know their all their angles.

What I will say is that if I am going to work with David Yarrow then do your homework first. I would look at his books and pictures online, then I can understand the pictures that he takes. When I am on set we can speak the same language.

JN: Great advice. The gays are going crazy to see your daughter Kaia on American Horror Story, including myself. How did she meet Ryan Murphy for the show?

CC: She didn’t know Ryan Murphy before she got cast. She started doing auditions during the pandemic. It was all self tape and send it in. She got the role of Ruby first where she was an undead girl that cuts people up in American Horror Stories. Now, she plays a Harvard student in American Horror Stories: Double Feature involved in an alien encounter and I am not sure how much more I can say than that. For her it’s a great outlet for her creativity and it’s fun. She’s having a great time with it.

JN: What is the goal of this exhibition? Can it go on to travel around the world?

DY: I don’t think Cindy wants to go on the road with me, but it would be everyman’s dream. We were in Wisconsin last night and that was a great place to start because it is where the university hospital is. It was a successful evening and we raised $400,000. The pressure is now on Chicago to see if they can meet or beat that. If we can raise over a million dollars this weekend then that would be fantastic.

When you meet the doctors like we did last night, it is an incredibly humbling experience. I’m just a snapper, a photographer, while these people are saving lives. It puts everything into perspective.

JN: I wish I had brought my checkbook to get you that million dollars.

The exhibition runs now through January 22, 2022. For more information visit uwhealth.org and make a donation today.

Star of the Showtime series Yolonda Ross is also working with Hilton Asmus Contemporary Gallery to raise money for three Chicago not-for-profit organizations combating breast cancer with a series of her photographs on October 30 from 11 a.m. to 2 p.m. Tickets can be found at beautyisme.eventbrite.com.