We do our best to promote that love is love. 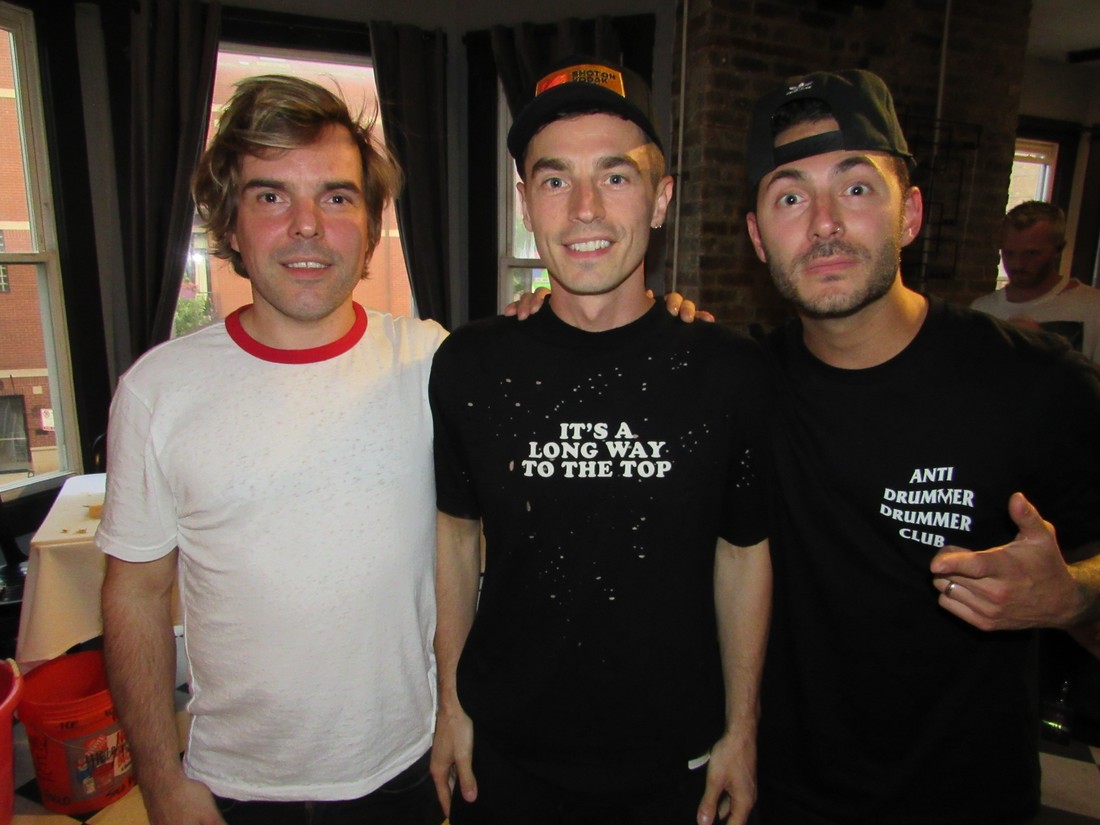 The rock band New Politics formed in 2009 and now celebrates 10 years together. It’s made up of David Boyd, Soren Hansen and Louis Vecchio. Their four alums blend music styles from pop to punk.

A long career has led the band to tour with acts such as Fall Out Boy and P!nk.

While visiting Chicago, the trio sat down to talk about the past and what the future will bring.

JN: (Jerry Nunn) Did you all grow up around each other?

SH: (Soren Hansen) No. That’s the craziest story. Louis grew up on Long Island. I grew up in the country in Denmark

DB: (David Boyd) My dad is American, but I was born and raised in Copenhagen, Denmark.

LV: (Louis Vecchio) I have been playing drums my whole life. They needed a drummer when they moved to the States and I was the guy. We found each other through a mutual friend.

DB: We moved 10 years ago from Brooklyn to New York.

JN: To celebrate the 10 year anniversary of the band are you playing smaller venues?

LV: Yes. We wanted to bring it back to where we started. In a way we are giving back to ourselves by playing these venues. It’s so much fun.

We also wanted to give back to our fans, who are the reason we are here in the first place. It’s crazy to be in these places.

DB: It’s the venues that we started at. The first show was in New York. It’s where we all met. We played some of our first shows there and it’s where we wrote most of our records. Our last show is in LA where we finished our records.

JN: You have fans waiting outside down the block.

DB: This run has been really phenomenal. It’s perfect for what we are celebrating.

JN: Is the band political with the name New Politics?

SH: I don’t know if we are political like that, but we talk a lot about what is going on, such as the state of our culture and the world.

At the beginning with the first record, we had more of an angry message so that’s how it all started.

DB: We had other sides that we didn’t get to show on that first record. The second record really showed another side of our music.

DB: I think it really resonates with where we are as a band right now. Two and half years ago we ended out time with the music label. We were trying to figure out what the next chapter would be. It got hard and lonely. When we wrote this song, it resonated. It naturally came together and worked perfect with the timing of this tour.

JN: It’s about growing up?

DB: Yes and starting the next chapter.

JN: How has the band matured?

SH: We have made some mistakes, but have tried to be honest. We went through a phase where we were a little too honest. That was the teenage years. We then found out what really mattered and made it fun.

Growing up is ironic because it’s about being okay with doing what feels right in the moment. I think most people can relate to that.

DB: Soren nailed. You learn as you go and go with the flow.

JN: Each of your songs sound different. Is there one that identifies the band?

SH: That’s the question of the century for this band. I think this next record will sound more like a whole thing with one producer for the whole record. It’s been a fun thing because we got to do what we wanted.

We didn’t always think things through that much. We love it all and just love music. We will listen to different types of music.

DB: What identifies us as a band is what you will see tonight. Seeing us play live tells a lot. Our live show is so much different than the record. Our roots are shown with ‘90s music, punk rock and grunge. I think that energy comes through. As writers we have so much more. We like to write music so it becomes what it becomes.

SH: When people react to our songs then it determines the sound of each record. Usually we are confused for half a year then it just happens.

SH: That determined the sound of the whole record.

JN: “One of Us” sounds like Queen to me.

SH: It came out of nowhere. We had the melody before any chorus. I personally thought it was fun to put a song on the radio with 16 different chords when we are known to be a band with three or four chords.

JN: Did touring with P!nk make you want to try stunts in the air?

JN: What did you learn from working with Panic! at the Disco?

LV: All of the bands we had the pleasure to tour with, we learned from their everyday operations with fans and crew members.

SH: How they put on a show and how to be more entertaining in the beginning, middle and the end.

LV: They are all pros in what they do. It’s important to be surrounded by that and absorb it.

DB: My biggest lesson is realizing the true test of talent lies in your ability to persevere.

JN: My podcast co-host loves 311. Do you have a story about them?

SH: Probably the tightest and nicest group ever, crew included who has been with them for 20 years. Nobody is leaving that camp. It was a pleasure.

DB: They were so friendly.

LV: During that tour I adopted a feed the drummer thing where a crew member would come up to me while I was drumming and feed me a spoon of something that was famous in the area.

P-Nut from the band poured a full beer all over me. I tried to drink, but couldn’t. He kept going and it went all over.

JN: How are gay rights in Copenhagen?

DB: Our grandparents dealt with all of that. It’s very different there. Some of my best friends are gay. None of that matters to me.

SH: We do our best to promote that love is love.

JN: What is the band doing next?

SH: We are finishing up the record and doing a bunch of festivals. We are going to do a fall tour. We will have a really busy year.

Next year is going to be a lot of fun too. Everybody can feel it. We needed to take a little breather honestly. Now we are very excited. Every band needs to go through that, but it’s hard to admit it.

Our team is amazing now. We have really great managers and everyone is onboard. We went from a major to an indie label. It’s incredible because people want to push you forward. The majors are great, but something should be said about people that have more to fight for. That is exactly what a band like us needs. We want people behind us who dare to take some chances. We also need to be involved in the steps that are happening instead of being told what to do. This just feels like a really great beginning.

JN: What would you recommend to a band to help them last 10 years?

SH: One thing that has helped, but we sometimes struggle with is to really pay attention to each other in the band. We have to remember to hold on to why we started in the first place. Also, listen to what each other is saying. That’s a really big deal.

LV: We learned that it’s okay to roll with the punches and take a step back for a minute. It’s a marathon, not a sprint.

New Politics return to Chicago on Nov. 12 to the Metro, 3730 N. Clark Street, with tickets at MetroChicago.com.