Sheppard jumps off with 'Geronimo'

If the gay and lesbian community is into us then that is amazing. We are all for it. 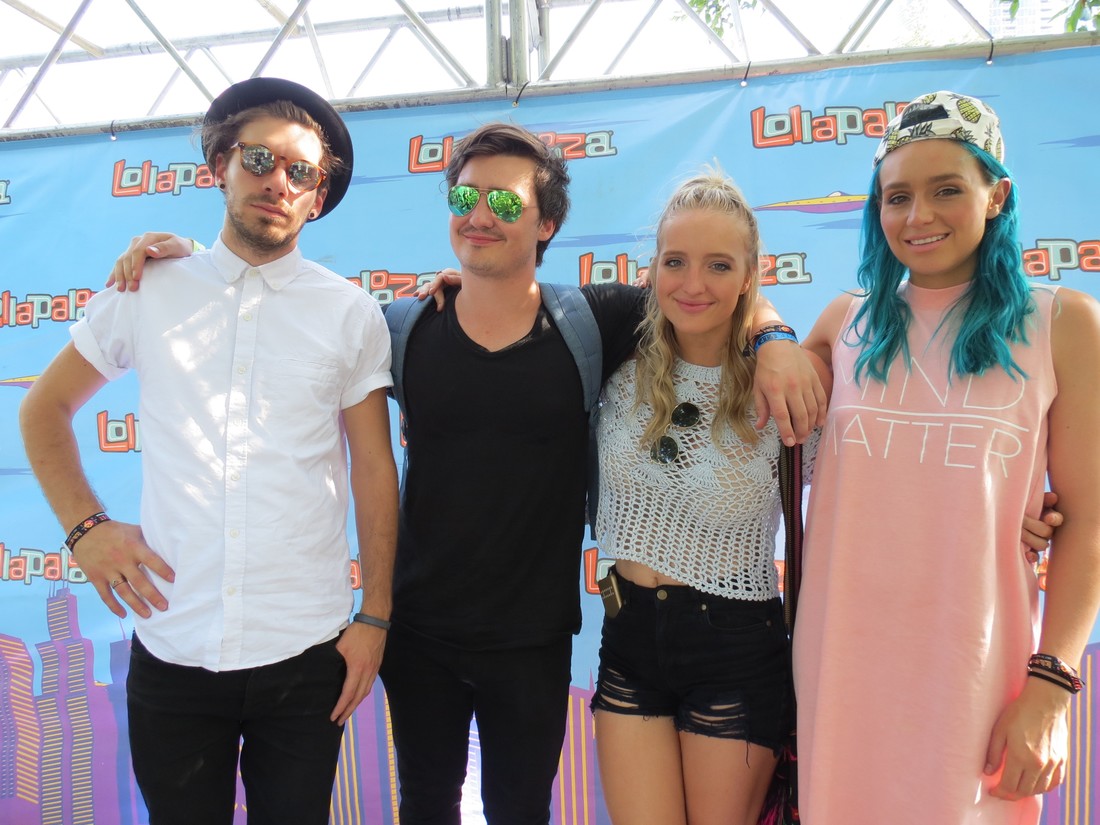 Watch out von Trapp family there’s a new singer sibling team with the Sheppard clan making new sounds of music. Straight out of Australia three of the members George, Amy, and Emma Sheppard are all related working the band together.

With a massive single “Geronimo” taking over the airwaves with an upbeat sound they have quickly rode to success. The album Bombs Away was certified gold by the Australian Recording Industry Association. They took over the ARIA Music Awards one ear being nominated for multiple categories.

We talked about their future plans backstage at Lollapalooza and how they keep it in the family.

JN: (Jerry Nunn) I am glad you guys all made it alive with the evacuation of Lollapalooza right after your set!

GS: (George Sheppard) We survived the apocalypse! I am very proud of us all.

JN: I read you all grew up in New Guinea.

GS: Our father got a job as a lawyer in New Guinea in 1989 when I was about three years old. He’s been working there and living there ever since.

JN: Was it a musical household growing up?

GS: Not really. We were all sort of performance orientated. It wasn’t until we were adults that we got together to work on music. Emma had a university assignment that she had to do. She wanted to put some harmonies in a song she was writing. That is where I came in. We had a great time working on music together. About a year later Jason Bovino was the third songwriter to come onboard. The three of us wrote “Bombs Away” and here we are!

JN: You must have traveled around the world with the song “Geronimo.”

GS: We have been to a quite a few places.

ES: (Emma Sheppard) Twice before. This is our third time.

AS: (Amy Sheppard) We never stay for long.

ES: We did a tour with Meghan Trainor here that was fun.

JN: I saw your set here at Lollapalooza. What a great crowd you had.

GS: For an early set we were really pleased. There so many dragonflies here. I just squashed that one.

JN: Gross. Talk about making your own record label instead.

GS: We wanted to maintain creative control from the start. We figured it would be best to do everything on our own instead of signing on to a label and them telling us what to do. It seemed to work out really well for us in Australia and New Zealand. That is where we are still independent. We are on Universal worldwide and Republic here in the States. They have been amazing to have onboard. I am not sure we could have done what we did in Australia if we were still independent in the United States. We would like to retain that independence.

JN: These days you can do both and learn a lot from the music label.

GS: Of course. They have their shit together. They have marketing teams, and promotions. The teams allow us to reach people we would not have been able to reach. At the end of the day that is what you want them focusing on and not so much what songs we should sing and what our album cover should be or who we should collaborate with. We want to retain that creative control.

JN: When did you notice “Geronimo” was growing into a hit single?

ES: When we released it in Australia it just kept growing and growing. It went to number one in three weeks. We thought that was it with “Geronimo” and we were happy with that. It was a dream come true. Then it started getting international attention.

AS: It was a snowball effect. It was one country after another so it has really taken off. It has been really nice for us.

JN: Where does your style come from, Amy? I love the hair.

AS: It is a bit eclectic.

JN: Would you ever make a reality show about the family like the Kardashians?

ES: Sometimes I look at our life though and think it would make great TV!

GS: We could do it but we are musicians so we want to work with music.

JN: How is it traveling with the family?

GS: It has pros and cons. It is great to have people surrounding you and taking care of each other in an industry where people try to fuck you over. They are people I can trust and the core of the situation is family. We fight like normal siblings too. What are you going to do? It is nice to tour and experience things with your family.

JN: You must be very protective of them.

GS: Of course. There is no one else. If anyone wants to talk to my sisters they have to go through me!

JN: How is your LGBT following?

GS: It doesn’t matter who you are but anyone who appreciates our music we have all the time in the world for them. If the gay and lesbian community is into us then that is amazing. We are all for it.

JN: When are you working on new music?

GS: We go back to Australia in August and we start to conceptualize the new album. We are very excited about that. We have been touring this batch of songs for the last two and a half years now so we are ready to start experimenting again and discovering a new direction for us and our sound.

ES: We don’t have any plans for that this year. We are back in the States for the Austin City Limits Festival in October. That will be it before we go back in the studio. Next year we will be back for sure!