I feel like I will be diversifying it from my angle. Not so queer anymore, but definitely a woman centered woman and just a human rights centered artist. 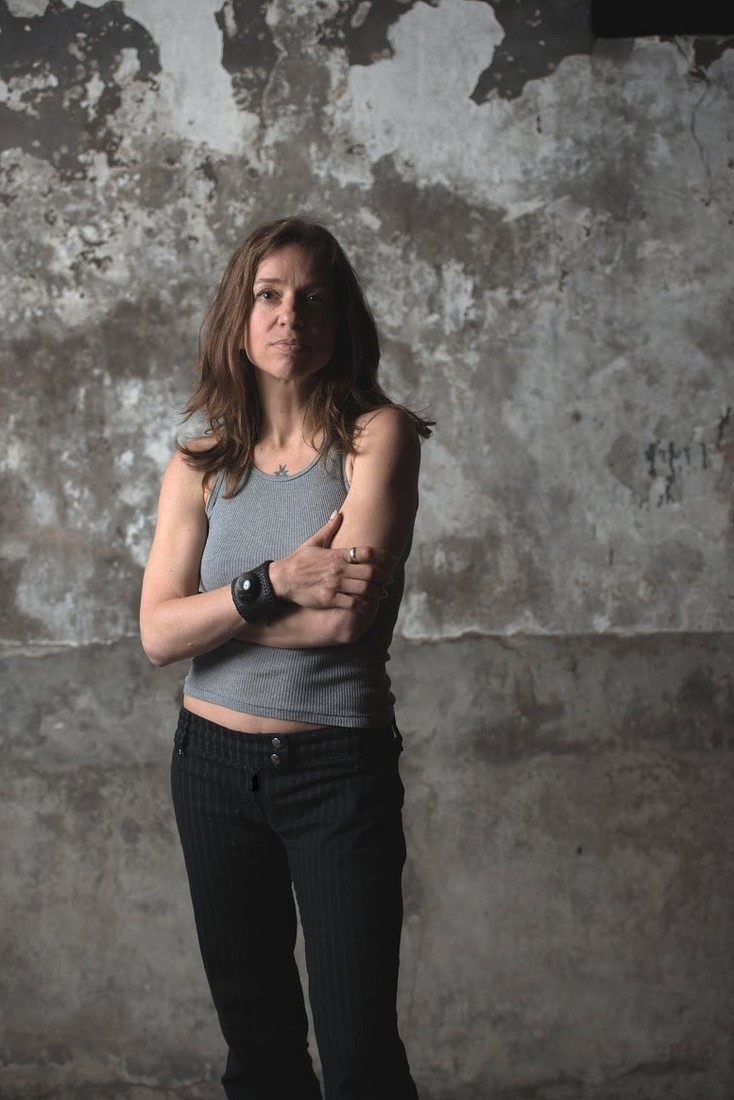 Want to get a sense of the swift passage of time? It’s been almost 25 years since singer/songwriter Ani DiFranco, one of the most distinctive voices in contemporary music, released her first full-length on her own Righteous Babe record label. That’s right, 25 years since you first heard her sing “Both Hands.” Since that time the indie music goddess has released 18 studio albums, including her latest Allergic To Water (Righteous Babe), as well as some live recordings. She also signed some big names to her label,  released some collaboration albums and generally became one of the most famous feminists, activists and entrepreneurs in the music world. Allergic To Water continues in the same mood and style of her previous New Orleans-era recordings such as Reprieve, Red Letter Year and Whose Side Are You On?, and features standout tracks such as “Careless Words,” “Yeah Yr Right,” “Still My Heart” and “Rainy Parade.” I spoke with Ani, who is currently in the midst of a tour, during her soundcheck in May 2015.

GS: (Gregg Shapiro) Ani, 2015 marks the 25th anniversary of the release of your self-titled debut album. Are you planning to do anything special to commemorate that event?

AD: (Ani DiFranco) Oh, no [laughs]. That album’s been so long forgotten. I guess there are some tunes on it that I still play. But it’s been such a long road, littered with so many records. Somebody was just telling me that 10 years ago was the release of my record Dilate, which was kind of popular. They said, “You should do a show that’s just the whole Dilate album this year [laughs]. I don’t know – there’s something about me that tends to keep moving forward instead.

AD: Wow! I think if I had to be as concise as possible, I’d say, “Be more patient.” It would apply to everything. I guess for a young’un, I was fairly patient. To go the indie route, you kind of have to take a decade to do what a major-label can do overnight. Still, my impatience worked against me at many turns [laughs].

GS: You’ve been living in New Orleans for a few years and have recorded all or parts of Reprieve, Red Letter Year, Whose Side Are You On?, and your latest album Allergic To Water there. How would you say that New Orleans and Louisiana come through in your work?

AD: In so many ways. I think first and foremost in just the biorhythm of my body. I think I kicked it down a notch when I moved to New Orleans. It was in conjunction with unconditional love coming into my life and then children and family. Everything collaborated to make me chill the eff out. I took my cue from the people of New Orleans and the way they live down there. And speaking of them, there’re so many awesome musicians to rub elbows with. That’s what I’ve been doing ever since. Much to my joy and the benefit of my records and such.

GS: “Harder Than It Needs To Be,” from Allergic To Water is one of the best explanations I’ve ever heard about the way a person’s family is present in that person, whether or not they want them to be.

AD: That’s cool that you picked up on that song. I like that song, too. I think in my songwriting – I’m not old yet [laughs] – but in my old age…I’ve been writing songs for 25 years and I am really pushing myself towards simplicity these days. I’m really trying hard. I think that was a song where it was successful. You can use very few words to say something that everybody understands. At some point, I imagine it’s when you find your significant other, your partner, that you really begin to address your parents in you [laughs]. You try to change these behaviors that are just mimicked from childhood.

GS: As a lyricist, you have a history of exceptional wordplay, exemplified on Allergic To Water in songs such as “Dithering” and “Happy All The Time.” What role does wordplay play in your lyric writing?

AD: I guess that’s a natural offshoot of my playful nature. When you live through language there are certain quirks about English that become very fun to play with. Though I only have a cursory understanding of some other romance languages and such, English seems quite quirky. Being the basis of our everyday culture – the system of measurement, the system of law – it’s all sort of convoluted, but that makes it kind of fun.

GS: In recent years, your label Righteous Babe has released albums by queer artists such as Nona Hendryx and Jennifer Knapp. Can you please say something about the inclusion of out artists on the Righteous Babe roster?

AD: That’s always been a part of the Righteous Babe mission through me and my heart and my songs. Inclusion and giving everybody equal airtime in this culture. It’s interesting, if I look back over my writing career, I pushed that part of my identity forward -- my bisexuality – as a political mission. Shove it out there, these alternative experiences that were not yet, when I was young, on the TV or accepted in mainstream culture like they are now. I think a diversity of voices is essential in art. Everybody needs to see themselves reflected to feel connected and whole and part of the human family. At Righteous Babe, we’ve always tried to provide a safe space for alternative voices to connect with people.

GS: Speaking of queer artists, you are performing at PrideFest in Milwaukee. What does it mean to you to perform at such an event?

AD: It’s going to be really fun for me to be included. I haven’t actually played a lot of Pridefests. It’s certainly been a long time. I was actually trying to recall when the last time was that I played a Pride event. It’s cool. I feel like I will be diversifying it from my angle [laughs]. Not so queer anymore, but definitely a woman centered woman and just a human rights centered artist.

GS: Earlier, we talked about Louisiana. With the 2016 presidential election less than a year and a half away, Louisiana Governor Bobby Jindal has been a vocal presence in the Republican sector and might be running for president. As a vocal political activist, what do you think about that?

AD: I think the more the merrier on that Republican side [laughs]. I say bring out all the people that want to run. As somebody who stands left of Democrats in this world, to see chaos and infighting and undercutting happening on the far right side of the spectrum is kind of a relief. I have to hope that we are feeling a pendulum swing back to liberal values, back to – I think – common sense, economically and culturally. We have an opportunity now to address things such as the criminal justice system, police brutality, to make big structural changes. I really hope that we can continue this momentum and do so.