They call the good guys a “babyface” and bad guys are “heels.” 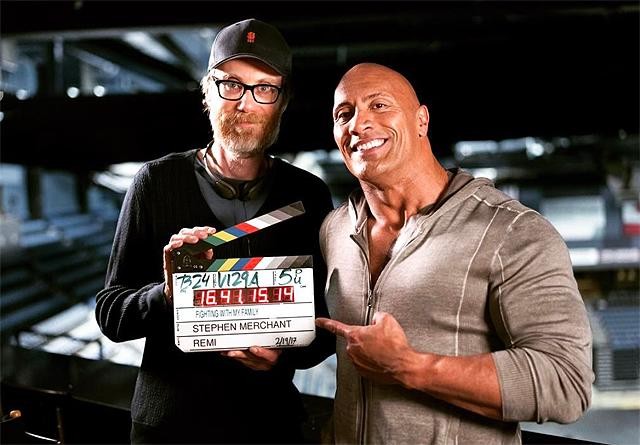 Fighting with My Family beats up the box office this February

Bristol born Stephen Merchant is a writer, actor, comedian and now director of a new film called Fighting with My Family.

He co-wrote and co-directed of the British sitcom The Office and was co-host of The Ricky Gervais Show.

Merchant played the white skinned mutant Caliban in the film Logan and had a supporting a role in the Tooth Fairy. Television credits include Modern Family, The Big Bang Theory and 24.

In Fighting with My Family he plays the character Hugh along with his writing and directing chores. The story follows a young wrestler named Saraya “Paige” Bevis struggling to find her way in America in the world of WWE.

Merchant popped into Chicago to talk about the film before its release.

JN: (Jerry Nunn) It was helpful to see the documentary of the story before your movie version.

JN: You had worked with Dwayne Johnson before in the Tooth Fairy?

SM: Yes and we had kept in touch over the years since then. As you mentioned, this project was first a documentary on British TV. Dwayne had seen it first when he was in London filming The Fast and the Furious 6. He couldn’t sleep one night and was watching it.

It’s the story about a family of British wrestlers, a mom, a dad and three kids. Their family dream is to get two of them into WWE. That is the big league for wrestlers. Paige was signed and sent to America. She goes through a rigorous training process and her brother is left behind.

That makes it sound like a drama, but it’s a fun and uplifting underdog story. I could see why The Rock wanted to make it into a film.

JN: It’s a story about the underdog, right?

SM: It’s an empowering story where she figures out who she is. It’s a coming of age story where both the parents and the kids need to come of age in the movie.

I never knew anything about wrestling before this movie. In fact, when The Rock sent me the video of the documentary I didn’t want to do it. I was just so won over by the family and their dreams and their ambitions. They are working class and really trying to make something of themselves. I tried to make a film not only for wrestling fans but other people that don’t follow it.

JN: Is wrestling trendy outside of the US?

SM: In England it’s a small, fringe thing. There’s just a handful of people that go see it. It used to be on British TV in the ‘70s or ‘80s. My grandfather used to watch it. Even as a kid I never understood it. You think of guys like The Rock and that is not what they looked like. British wrestlers were giant, fat guys who just bumped bellies!

There were no back flips. There was just running around.

JN: Did you see the Netflix wrestling show Glow?

SM: I never saw that because it came on when we were making our movie. I didn’t want to be influenced by it.

JN: Was The Miz cameo from the Real World TV show planned?

SM: He’s a big WWE superstar. We were able to shoot backstage at a WWE event. He happened to be walking by and I grabbed him. I asked him to be in the scene and he did it.

JN: Have you attended many wrestling functions?

SM: The first wrestling event I went to was with Dwayne for Wrestlemania. I was blown away. The fans are so excited and create an amazing atmosphere. The performers are such great showmen and show women. I was impressed by the spectacle and theatrics.

Dwayne himself came out with a flame thrower and set fire to a 10 foot sign of his name!

JN: What was the learning curve for wrestling?

SM: I had to learn a lot about it. Dwayne was very helpful. He explained how it all works. They call the good guys a “babyface” and bad guys are “heels.” There are a lot of insider terms.

He helped the actors with wrestling moves and performing for the crowd.

We filmed a big finale at the STAPLES Center for one hour after a live telecast with the crowd from a WWE event. They didn’t lock the audience in the stadium, they invited them to stay.

Dwayne came down and emceed the event. He explained what was happening and got them to cheer or boo when needed.

He’s like Elvis when he comes out. I told him to keep it short, that we only had an hour. He does 20 minutes. He’s talking to the fans, making phone calls and I think I’m the only one screaming to get The Rock out of a wrestling ring!

JN: Was anyone hurt with the stunts?

SM: We were very lucky. There were a couple of bruised elbows. Florence Pugh, our lead, had a bump one day. We had to be careful for the next few days after that.

They kept asking me to have a tumble in the ring and I thought, “Absolutely not!” i’ve never skied or done a sport of any kind and I am not going to try wrestling now. I am very tall and I would snap easily!

JN: You spoke about Merchant the Menace would be your wrestling name at the screening last night.

SM: Dwayne told me that any good wrestler takes who they are and dials it up to a hundred. I’m a British writer so I could dress like Shakespeare and have that white ruff around the neck. I could have the quill and speak in the old English accent, “Forsooth I am going to layeth the smacketh down on you!” It would be a play on The Merchant of Venice, known as The Merchant of Menace.

JN: What did the family that the movie is based on think about it?

SM: I wanted to meet them before I made the film, so I hung out with them. I was a little nervous to show it to them. They are wrestlers and very tough people. If they didn’t like it then they could break my legs.

They were very emotional. They laughed and cried. They thanked me enormously for the way I treated them in the movie. I didn’t want to shy away from the fact that the dad did some jail time in his youth. He talks about how wrestling save him from that dark life.

I made them go back to some of these tough moments, but they really responded to it well. I showed it to Paige at the WWE office. I didn’t sit in there with her because that would be tense. She didn’t want to come out of the office after it was over so the other wrestlers would see her in tears. She was very moved.

I didn’t want to make them into saints, but real people. At the same time, I do like the family and they are very loving with each other and wrestling. I wanted to celebrate that. This girl went from zero to hero in a real way. It really is a Rocky story that was lying there ready to be turned into a movie thanks to Dwayne.

JN: And thanks to you. You did a lot with the writing, producing, acting and directing.

SM: Did you relate to the story as American even though they are British?

JN: Absolutely. You kept the story real and relatable.

SM: We also had Chicago actor Vince Vaughn on the film. He’s terrific and hilarious. He’s one of the reasons I got into movie business. When I was young I used to write movie reviews. They sent me to see a movie called Swingers. Even though it was very much about LA and American dudes dating, even as a British lad I really responded to it. I remember thinking I could do that and it was just a bunch of friends having a goof. To have him in this feels like an end of a journey.

JN: How was it wearing all the makeup in Logan?

SM: You are referring to my extraordinary performance as a giant, albino mutant? It was three and a half hours of makeup every day.

Hugh Jackman and Dwayne Johnson should have a fight to the death on who is the nicest person. They both are exceptional. I have never seen two men that never get annoyed. Those guys work out every day before we even arrive on set. They just carry these projects. It’s almost like they have sold their soul to the devil!

JN: You have Jojo Rabbit coming up?

SM: It is a movie I did with Sam Rockwell and Scarlett Johansson. It’s a very satirical, black comedy about a young boy growing up in Nazi Germany. It sounds like dark subject matter, but it’s very funny. It’s directed by Taika Waititi, who is from New Zealand and directed Thor: Ragnarok. He’s really talented. That was a blast and we shot it in Prague. I play a Gestapo officer with a German accent and the whole thing. It will come out this year sometime.

Fighting with My Family wrestles into theaters on Feb. 22.