My friends said if I dressed in drag I would look like Anjelica Huston. 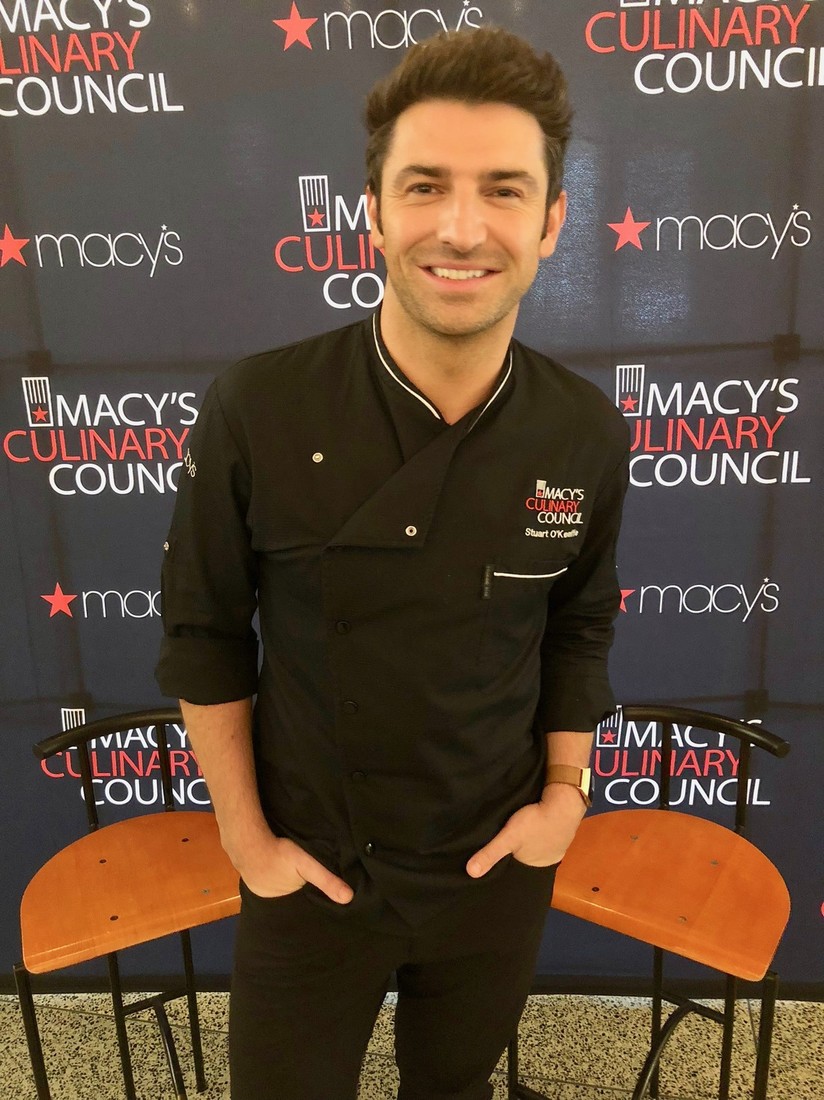 Chef Stuart O’Keefe is always cooking up something new. This Irish cook is best known for his Food Network show Private Chefs of Beverly Hills. He has appeared on CBS’s The Talk, Home & Family and Republic of Telly.

His current cookbook is called The Quick Six Fix and features 100 recipes.

Macy’s Culinary Council welcomed him in for a cooking demonstration and he spoke about his new TV show before the event started.

SO: (Stuart O’Keefe) Yes. I live there, but grew up in Ireland. I would always cook with my mom. That is how I got into food. I would make desserts with my aunt on the weekend, then my mom would make me cut vegetables like onions and carrots. She would come make dinner for us after work. I was always surrounded by it. I fell into it and enjoyed it.

When I left high school I was deciding what to do with my life. I didn’t want to go to college because I wasn’t book smart. It was tough for me to get good grades in high school.

There was a course on culinary arts in Dublin. I applied and got in by a point. I did that for four years and got my degree at the Dublin Institute of Technology.

I moved to Napa Valley and lived there for two years, then I moved down to LA. I started doing private dinners. That is how I got the Food Network show and Private Chefs of Beverly Hills.

JN: All the celebrities…

SO: I am not impressed with that anymore. I am trying to phase it out a bit. I don’t do it as much anymore. If a client from the past asks me then I will do it. I still enjoy going to people’s homes and cooking.

JN: In Chicago celebrities can be a big deal.

SO: But in LA they are everywhere.

JN: Were you ever nervous around one of them?

SO: Anjelica Huston was amazing. I worked in her house and she would come home for lunch. I was there for three months. It was a short term gig. She was so nice.

SO: My friends said if I dressed in drag I would look like Anjelica Huston.

JN: What about Ryan Murphy?

SO: He was really sweet and nice to me. He just wanders around the house and quiet. He probably saves his strength for when he’s on the set.

JN: Have you seen Pose?

SO: I haven’t seen it yet, but my friends are telling me to watch it.

JN: How did you connect with Macy’s?

SO: My manager Jason started this whole thing with me being on TV and doing events. He used to work with Macy’s a lot with Clinton Kelly. He had asked them about me.

I am going to be on a new Food Network show that is airing in August. I have the script right here and should be in New York today because I script reads right now. We are shooting it with 14 episodes and starts Aug. 12. It is called Let’s Eat. It is with Jamika Pessoa and Brandi Milloy. It is the three of us. We do really fun food and all have something different to offer.

We shot the pilot already and did three episodes yesterday. As soon as I get done with this I have to go back to New York tonight to shoot another three in the morning.

The process is happening very fast. I am so lucky and always wanted to get back on the Food Network in the right way. I think it is so perfect for me.

JN: Is there something you currently into in the kitchen?

SO: I am using my Instant Pot cooker a lot. I am not a big fan of gadgets. I always think it is going to explode in my kitchen and that scares me. It releases steam then the dogs start barking. There are so many mechanisms on them now that an explosion would never happen. That is is just in my head!

You can do a whole chicken in 30 minutes. Ribs usually take three hours but it can also be done in 30 minutes with it. It tastes exactly the same as if you put it in the oven. There is no difference. It is a game changer. If you want to make perfect rice or sauté stews in there.

JN: Do you cook at home much?

SO: I try to. I will invite friends over. When you cook you are making mess so why not make food more than one person? I will do Sunday funday and I like to cook brunches a lot, maybe because I know we will be drinking all day!

I am always trying to cook healthier so I don’t put on weight. I have to work out like four times a week because I am always doing stuff with food all the time.

There is a company called Thistle that I use a few times a week. They will deliver salads to my door. I won’t have to think about it if I am busy running around. I don’t want to spend money at restaurant and then it not even be healthy. With this I will know how many calories are in my salad. I wouldn’t cook at home seven nights a week. I taste a lot of food.

JN: Tasting is big part of cooking that people might not think about.

SO: With this show right now there are four segments per episode and we are tasting every single thing. I am just stuffed at the end of the day. I could take a bite but then I take another and another.

I am very excited for this show because the dishes are turning out really well.

JN: What are you working on besides the show?

SO: I am doing a few more dates with Macy’s. I will be on the show The Best Thing I Ever Ate talking about my favorite types of food.

SO: No, I never talk about that. It is more about my favorite restaurants.

JN: You are too American now.

SO: I became a US citizen last year so yes I am!