I think all of the other Broken Lizard guys should do full frontal nudity in part three. 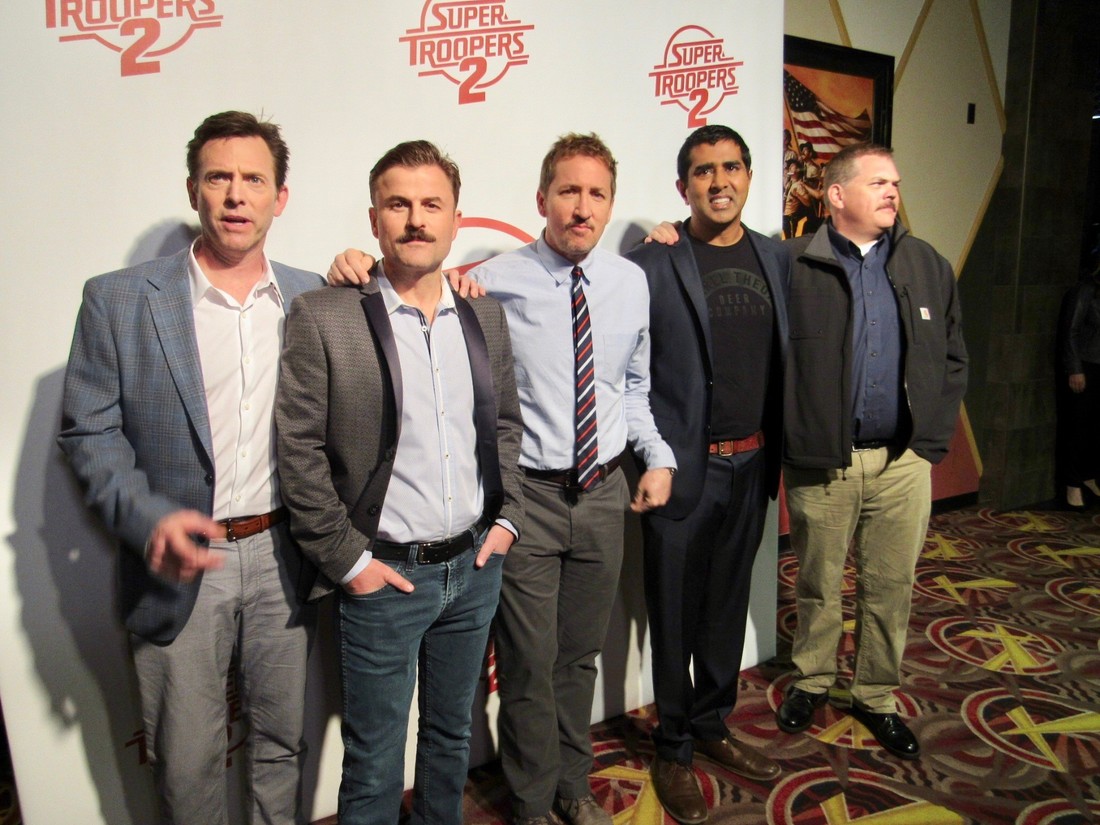 The comedy troupe Broken Lizard is back at again with Super Troopers 2. The team is made up of Jay Chandrasekhar, Kevin Heffernan, Steve Lemme, Paul Soter, and Erik Stolhanske was formed at Colgate University for student projects. They have worked together on screen writing, acting, and producing together with such films as Super Troopers, Club Dread, The Slammin’ Salmon, and Beerfest.

In  2015, they created a crowdfunding campaign to pay for Super Troopers 2 and thanks to loyal fans exceeded their goal. The sequel remains true to the comedy of the first film while taking place in Canada following the rag tag group of Troopers laying down the law.

Chandrasekhar was born in Chicago so brought the ensemble to chat on the red carpet about the funny film that releases nationwide on April 20.

JN: (Jerry Nunn) Jay, you were on TV in a police uniform. Why didn’t you wear it for this red carpet?

JC: (Jay Chandrasekhar) It is hard to walk around in that thing pretending to be a real cop.

JN: How were the original characters created? Did you know someone named Rabbit?

JC: No. We named Foster after a third string quarterback in the NFL. Farva we named after Brett Farve. Thorny, Mac, and Rabbit were totally made up.

JN: How was it working with Lynda Carter again?

JC: She has such a bawdy sense of humor. She is a funny woman and likes dirty jokes. She is just terrific.

JN: How did the crowdfunding work for Super Troopers 2?

JC: We needed to jumpstart raising the money. Fox said they would release it, but we had to raise he money. Investors were not sure. We crowdfunded it and 54,000 people gave us 4.6 million dollars. It was amazing. Without that we never would have made it.

JN: Why did you decide to go to Canada with this sequel?

JN: How was having Rob Lowe onboard?

JC: The best. I did a show called The Grinder with him and Fred Savage. After that I asked him to the do the movie. He offered to do anything, so that’s what happened.

JN: What do you want to do with Super Troopers 3?

JN: Tapping into the superhero market!

JC: Yes, the cape and tights, all of it.

JN: What would your superhero name be?

JN: What makes this Super Trooper different than the last one, Erik?

ES: (Erik Stolhanske) We had a little more time to improvise in this one. The first film was so low budget and scripted that we had to make it exactly like it was on the page to make the budget. With this one being shot digitally we could burn what we scripted, but then we had freedom after that was shot to improvise a bit. Will Sasso and Rob Lowe brought interesting improvisation to this movie that wasn’t in the script.

JN: You wrangled almost everybody back from the first one.

ES: We sure did. They loved it and had a great time.

JN: What happened to the German swingers from the first movie?

ES: They are out there sowing their oats right now.  They are so fast and loose we couldn’t find them!

JN: How were you involved with the movie The Dukes of Hazzard?

ES: We had small parts and did rewriting in the movie, but Jay directed it.

JN: Why is the group called Broken Lizard when I heard Chocolate Speedo was another name considered?

ES: Jay went to the print shop one day and decided to name us Broken Lizard. We didn’t have a lot of say in it, even though we brainstormed on what it would be called. He wanted a resemblance to Monte Python, but not to directly rip it off. It’s not a python, but a lizard.

JN: Was that the game plan?

KH: I get to the play the jerk so anytime there is a ridiculous outlandish line these guys just gave it to me. It was a group effort to make me the scene stealing ass.

JN: It seemed to be turning around the character that was bullied and having fun.

KH: Yes and I go crazy with it.

JN: Were there any limits?

KH: In the first movie I did full frontal nudity. I was not doing it this time, so one of these guys did it. Steve did it. I kicked it over to him.

JN: That is kind of brave…

KH: Once was enough for me.

JN: How was working with a live bear?

JN: What would you like to see in part three?

KH: I think all of the other Broken Lizard guys should do full frontal nudity in part three.

KH: A little something for everybody.

JN: There’s a lot of fun stuff for the LGBT community.

JN: I didn’t feel like we were being picked on.

JN: But, it is definitely a bro movie.

KH: Good. The idea was to create a world where these are the guys you want to hang out with and you will like them. That was the intention.

JN: The escort scene was hilarious. There were both men and women. You don’t see that every day.

KH: They are open minded in Canada.

JN: Rob Lowe was so good at comedy.

KH: He’s great at comedy and unbelievably good looking. When you act in a scene with him you couldn’t get away from the fact he’s good looking.

JN: Even with that wig!

KH: Yes, even with that funny wig. He would take that ridiculous wig off and would have a crew cut. He’s a good looking dude.

KH: We started working on Super Troopers 3 and also Potfest, which is our sequel to Beerfest. Steve Lemme and I shot a TV show pilot that we hope will be picked up.

KH: I think there’s an audience for it.

JN: I bet it’s growing all the time.

JN: Steve, were you nervous about being naked so much?

PS: (Paul Soter) He’s aways naked on the inside a little bit, and never wears underwear. You would be fine if we got rid of clothes, wouldn’t you?

JN: You are a nudist, Steve?

SL: (Steve Lemme) We have a naked household. I have little children and I always walk around naked. Listen, this is who we are and how we were created. It’s life and beautiful.

I think I have been in some sort of undress in every movie we have made. I have never gone full ding-a-ling until this movie, but the King Ding-a-ling comes for everybody at one point in all of our movies. Kevin did it in the first Super Troopers. I learned from his experience. Let’s be honest, I don’t know what he’s working with in real life, but on that day he was a tuna can. He was wider than he was long!

PS: I believe you described it as “a button a fur coat.” I thought that was apt.

SL: It was an egg in the bird’s nest. That is how are, if you can’t handle the other guys making fun of your junk then you can’t be in the group.

JN: With Rob Lowe, he even played with a ding-a-ling.

PS: Right, but we didn’t get to see his.

SL: No, but that would boosted us by ten million dollars right there!

PS: Think of the business we could have done if we showed him naked.

JN: What’s one quick story about Brian Cox? He’s really a serious Shakespearean actor when he’s not with you guys.

PS: He is and he doesn’t like shooting at night. He is usually fantastic, but turns into a pumpkin when the sun goes down. We broke his eyeball. We kept him up late at night and worked him too hard. He showed up with an entire eye that was bloody and disgusting. In post production we had to go through and fix one of his eyeballs because it was completely bloody, just from the hours and the stress of dealing with us.

SL: Now if you look at those scenes one eyeball is digitally white.

PS: Yeah, there’s one that is brighter than the others. It is a fun little parlor game!