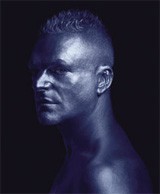 If you close your eyes and listen to Erasure’s latest single, “I Could Fall in Love with You,” you may just be transported back to a kinder, gentler time—when synthpop ruled the airwaves not unlike how hip-hop dominates the radio dial today.

That seems to be exactly what bandmates Andy Bell and Vince Clarke, who founded Erasure in 1985, had in mind when they began conjuring up their latest collection of perfectly tuned pop songs, Light at the End of the World.

Will the retro-tinged album—Erasure’s 13th studio effort—once again propel the duo to the top of the charts? Maybe and maybe not. Fans shouldn’t stress out either way, since they’ll be getting all the Bell and Clarke they can handle when the pair travel the country this summer with the True Colors Tour. (The True Colors Tour hits Chicago, June 12th.)

Just before Light at the End of the World dropped here and across the pond (Editor's note: this interview was originally published on May 22, 2007), Bell answered a few questions about his expectations for the album, how it was made and who he’s hoping to chat with while on tour.

BO: The new album is almost out. Are you nervous?

AB: Yeah, I am a bit nervous. I try not to get too hopeful about these things, though, because it all comes crashing down if you do. So I try to protect myself a bit.

I’m getting a really good vibe, though. All the fans seem to have the album already—which I’m not sure if that’s a good sign or a bad sign. At least people are enthusiastic about it.

BO: Erasure has seen quite a revitalization recently, especially in the U.K. What do you think brought that on?

AB: I really don’t know, to tell you the truth. It’s hard for us—we don’t get a lot of press in the U.K. and we’re not often invited to play the festivals and things like that, so I think it must have come down to the fans. And maybe people were just waiting for us to make something of a comeback.

BO: Some have suggested it’s because you’ve gotten back to writing catchy, three-minute pop songs. Do you agree with that?

AB: Yeah, that could have had something to do with it.

I really loved the Erasure album from 1995, which was kind of overlooked by a lot of people. After that I think we had a few mishaps, such as with Loveboat, although I think there were some good tracks on there.

Once you’ve gone out of fashion, though, it’s quite hard to claw your way back. You just have to keep going, not give up or get complacent.

BO: Were you think about that when you started working on Light at the End of the World?

AB: We hadn’t written any new material for quite a while—since Nightbird (in 2005), really—so we had loads and loads of ideas that were just sort of pent up.

After Union Street (released in 2006), Vince had moved up to Portland, Maine. I went to visit him a few times and we had these songwriting sessions while I was there—two weeks in a row, every afternoon. We got out as many ideas as we could, and came away with about 24 songs.

We eventually got that down to 16 and then started to record the whole thing in a house that we had hired where we moved all our gear. It really was a kind of “made at home” record.

Then we brought it back to the U.K. and mixed it here, so it wasn’t all that expensive to make, really.

BO: Was that a new experience for you—recording at home?

AB: I’ve done quite a bit of recording in my own home—doing vocals and then sending them back and forth over the Internet. We did a lot of that while making Nightbird. Otherwise, we have been in a lot of residential studios before, but that’s not really the same.

One time I recorded in Hamburg, Germany, when I had a flat there for a while. But really, this was the first time we had done something like this on a larger scale.

BO: Now that you’ve kind of seen a comeback in the U.K., do you think something similar could happen in the U.S. with this album?

AB: I don’t know, though people seem to be more excited in the U.S. than they are here in the U.K. I think that has a lot to do with the fact that we’re doing the True Colors Tour.

I think it’s a culmination of that and having a record out. I’ve definitely got my fingers crossed.

BO: Is it important to you that you get some recognition in the U.S.?

AB: It’s certainly nice, though we’ve really only had a few one-offs as of late in the U.S., and those were purely down to radio play.

We probably won’t get much of that this time, though, since we’re still with a very small label in the U.S. You need at least $100,000 to secure air time, which we haven’t got.

So I think by virtue of word of mouth and satellite radio and the LOGO channel, hopefully people will get to hear the record and word will spread that way.

BO: Can you tell me a bit more about the True Colors Tour? How did you two get involved with that?

AB: It was an idea our agent in New York came up with a few years ago—to do some kind of benefit festival. We had already said “yes” to it, so we were just waiting for the timing to be right.

Once Cyndi Lauper got involved, things really started moving—with the Human Rights Campaign and others getting involved, too.

I know Cyndi’s quite a fan of ours, and vice versa, so I can’t wait to be on the same stage with her. With Debbie Harry, too, since I’m a huge fan of hers and of Blondie.

It’s a dream come true for us, and we think there’s a lot to learn from these people. I also am looking forward to meeting some of the new people, such as The Gossip and Rufus Wainwright. I think it’s going to be a really great atmosphere.

We’re doing three songs from the new album and the rest of the 45-minute set will be hits.

BO: Will you get to perform with any of the other acts?

AB: I think we’re all supposed to perform “True Colors” together, and maybe at the end, “Take a Chance on Me.” But the details haven’t fully been worked out yet.

BO: Anyone you’re hoping to mingle with when you’re not on stage?

AB: You don’t really know until you’re there, I think. It’s one of those things you can’t think about until you get there and see people and feel the vibes.

I’ve only met Cyndi one time before, and at that time I didn’t know what to say to her because I was quite flabbergasted when she came over to say, “Hi.” I’ve met Debbie five times now, but I’m always stumped for words because I can’t get over being a fan. So I hope I can get over being a fan and treat them all as people.

Order Erasure's new album, Light at the End of the World, at shop.chicagopride.com. For more information on the True Colors Tour visit www.truecolorstour.com