JR JR grows up, opens up about 'Same Dark Places'

I am living with anxiety, but I am thriving on it. 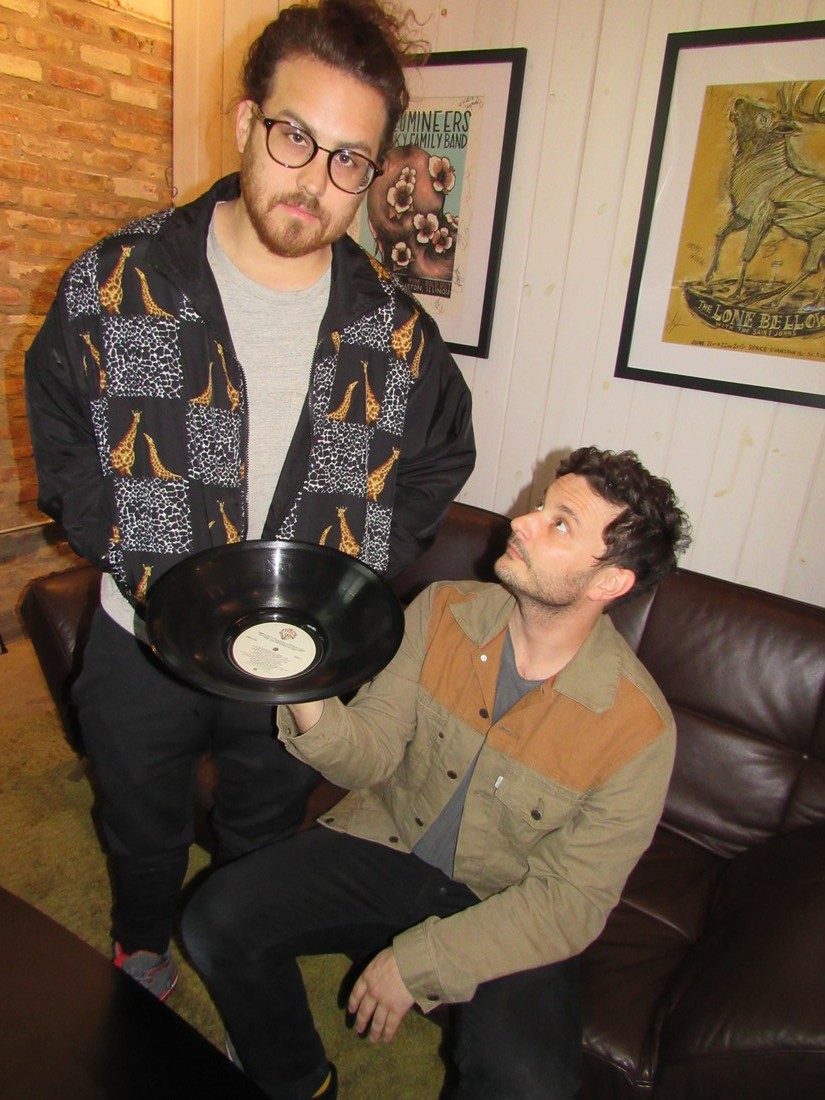 The band JR JR may have confused fans with a name change in the past, but are headed for well known stardom in the future. Formerly known at Dale Earnhardt Jr. Jr., Daniel Zott and Joshua Epstein changed the name to break away from the Nascar driver.

With a catchy single “Gone” and a self titled album JR JR plans on not being forgettable no matter what they are called.

The duo spoke about new music before a recent show at Space in Evanston.

JN: (Jerry Nunn) Where did you two meet and how did the band come together?

DZ: (Daniel Zott) We were both in bands in Detroit in the late ‘90s. We knew about each other. We would go to each other’s shows. We had mutual friend and were sharing music. Josh just called me one day and asked me to make a song with him.

We made a song in one day. It ended up on our first record and was called “Simple Girl.” After that song we just kept getting together and writing.

It was a very natural. We just started making music and had to be a band.

JN: Are there other members in JR JR to help out?

DZ: It was just us two for a while. We hired a drummer for touring. For the last year or two we have incorporated a drummer name Mike Higgins. We have a multi instrumentalist named Bryan Pope. They all help with the writing of the band and in the studio sessions. They are very much of who we are now and what we sound like.

JE: (Josh Epstein) We all do a little bit of everything. We felt it became cumbersome when we all felt responsible to do something. I think we both have the musical brains where we can just bounce around.

JN: How do you describe your sound to someone?

JE: It is elements of folk, pop, hip hop, and electronic music. I think at this point we sound like ourselves. That is what I hope to keep going.

JN: So no other musical influences?

JE: Maybe Paul Simon, The Beach Boys, or The Beatles. I listen to new things, but it is hard to be influenced by your contemporaries sometimes.

JN: Who is whistling on the track “Gone?”

JE: Me. I am a really good whistler. I would say I am better than Andrew Bird.

JN: Where did you learn to whistle?

JE: I don’t know. It was just a thing. I don’t know how or why. I can whistle three different ways.

JN: Who did the treatment for the video?

DZ: There is a duo based out of Spain called los pErez. It is a guy and a girl. I don’t know their names. They mainly do funky advertising. They have dipped into some music and short films recently.

They loved the song and came up with the idea. We just let them do whatever they wanted to do, which seemed to work well.

JE: It was my favorite video shoot that we weren’t in.

JN: You were not. They split up the bodies in the video I noticed also.

JE: Recently I saw a commercial on television that was similar, but not done as well. I think they are really good at what they do.

JN: I noticed some bullying in the video, possibly the character is picked on for being gay.

JE: We were writing this album in the time of the republican primaries and the election. I think our sense of social justice and the need to feel proactive has intensified in the last couple of years on all fronts.

JE: It was meant to be a hopeful song. There is a story my dad used to tell me about some of the beat poets when they were hiking on a mountain in Japan. They left a really nice bottle of champagne on the mountain with a note that said, “Whomever finds this enjoy.”

I think it is our responsibility is to leave the world better than when we found it. It has that message. We have all been to the same dark places “you might find I left a light beside the bed for you ‘cause I’ve been there too.” It is meant to be supportive in that way. It got used in 13 Reasons Why on Netflix. When we realized who was going to watch it and talking about some dark and scary things, we knew it was our responsibility to inform people more. I suffer from anxiety, so I want to try to de-stigmatize that from everyone. I wanted to let people know there are treatments and they are not alone. It is sing of strength to ask for help.

It is out responsibility if we are going to make content that is that heavy that we present an avenue for people to get help.

DZ: That is what these shows are about, too. The shows we are doing this month are in connection with the JED Foundation. A part of the proceeds go to help fund what JED does, which is to help young teens that are struggling with suicidal thoughts.

These smaller shows are centered around “Same Dark Places.”

Josh is being brave. I am just sitting next to him. It takes a lot to say that. We are going out and saying it happens to so many people. It is important to talk about it and be open about it.

JE: I am living with anxiety, but I am thriving on it. We need to preach self care.

JN: The band is named after Dale Earnhardt?

DZ: The name was Dale Earnhardt Jr. Jr., which was really fun, but then became a distraction. As we figured what we wanted to do musically the name felt like a band member. People just wanted to talk about him. We ended up to being JR JR. We feel a lot more free artistically now.

JN: What are you doing after the tour?

DZ: We have been working on a record for six months. It is done. “Same Dark Places” is one of the tracks off of that. We will start rolling out some more songs in the next few months.

There will be more surprises down the line, during the summer and the fall.

JE: We are also trying to live in the present, and adapt to the uniqueness of our time. We want to function in real time, make something and put it out. We want to get out of the dinosaur, major label cycle, where usually bands take time off, make an album, then tour for two years.

DZ: We would love to be The Beatles and put out a record every six months. The machine doesn’t allow for that, because it is such a slow process.

We have some ideas on rolling out different things. We are always making music!