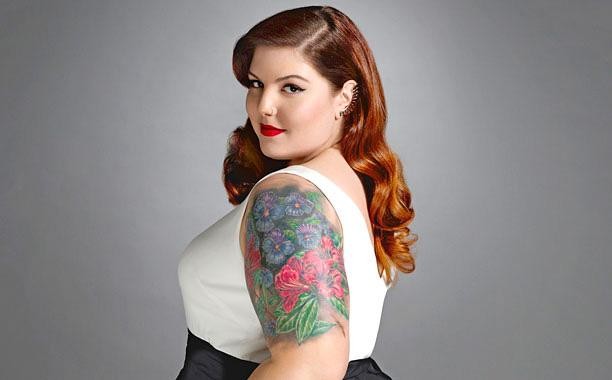 The singer from Seattle, Mary Lambert, made it big with Macklemore and Ryan Lewis for the hit single “Same Love.” The song blew up worldwide featuring a straight man fighting for gay rights. She later released the song solo with “She Keeps Me Warm” and played festivals like PrideFest in Milwaukee and Market Days in Chicago.

Lambert’s latest studio album Heart On My Sleeve was just that not only referring to her arm tattoo but also intimate tracks about being bipolar and childhood trauma.

Nunn went backstage to talk to the artist at a recent appearance at Northwestern University.

JN: (Jerry Nunn) So great to do this interview in person. Much more personable than talking on the phone.

JN: How did you get involved with speaking at Northwestern?

ML: Over the last couple of months I have started doing more speaking engagements, whether talking about body image, songwriting or sexuality and how that integrates into music. I was going to be a teacher so I was started on this trajectory. Speaking in this way is really affirming and fun.

This all happened and it felt really natural and great.

JN: This is something you are good at with speaking and poetry before.

ML: It is fun to be good at something you like. I feel like people are sometimes good at stuff they hate or the opposite where they love something that they are not good at.

JN: You are speaking about songwriting so a lot of tips for the songwriters out there?

ML: I hope so and have something to offer. That’s the goal!

ML: I think this is an overreaching theory but I believe people are motivated by wanting to be understood or wanting to be loved. I feel like you can make yourself crazy by breaking down the motivations of even speaking. I think when someone is moving through their life often they want so much to be understood and to be loved that they sometimes make themselves more digestible so that people can understand them more even it is not their comprehensive self. I find that happens a lot in major labels as well where people don’t feel they can explore the full scope of who they are and what they are.

JN: Did you watch Beyonce’s Lemonade?

ML: I started to then I had a whole bunch of things to get to and then my computer froze. I saw 20 minutes and it was really shaking for me. The visuals are insane. She’s a goddess. What can you say?

JN: She is doing some of things we are talking about with speaking and being women empowering.

ML: Exactly. I think we as women are taught to be small and dampen ourselves. I think if you explore the full capacity of your artistic self then you have to trust that people will understand you. That is part of being a great artist is being vulnerable and trustful in the audience.

JN: Talk about your “Ribcage” video.

ML: It was my baby. “Secrets” was not my concept but “She Keeps Me Warm” and “Ribcage” were things I really wanted to develop. To work with my friends as directors was really fun as well.

“Ribcage” in particular was really an arduous, long process. I think it was perfect and just the way it was supposed to be. It gave us a chance to recalibrate and decide where to go.

ML: Angel did a cover of “Same Love” a few years ago. I was such a fan of hers. Angel is so raw and she goes hard. I reached out to see if she wanted to do a feature on “Ribcage.” I had also asked K. Flay, who is a dear friend of mine. They both sent tracks back and I couldn’t choose so i used them both!

JN: Angel is an out artist so I hope she makes it big.

ML: Yes, and she also did a track on Nick Jonas’ album. She is so cool.

JN: You are selling t-shirts in front?

ML: Yes, they are quotes from Tweets I send. I feel like they embody what I am about. The first one is “Gender Roles Are Gross.” It is silly but also meant to disrupt someone’s thought processes when they see someone wearing it. I know so many people that are gender nonconforming and in non traditional relationships.

I talk to friends and family members that are in these roles and are starting to question these roles. Why are the women always vacuuming or cooking? They might not always want to do that so they have a moment of disruption. Even though these t-shirts are for fun I hope they challenge something in some way.

Another one is “Everybody Is a Babe” because everyone is one.

Both shirts are offered in crop tops so they stretch. The t-shirts are offered from small to 6X. I went to websites where they talked about being curvy but only offered small sizes in their t-shirts. I wanted to make sure everything was available for any size.

JN: How can someone be a Babe of the Week?

ML: All they need to do is wear a shirt and #MaryLambertFan then post it on Instagram. I will choose the person each week.

JN: How was playing live in Japan?

ML: It was so much fun. I went to go meet my brother in Osaka. When I performed I thought no one would come but every show was full. I didn’t know I had Japanese fans. I had the greatest time and learned so much. I went to a baseball game, which was a blast. They were enthusiastic but polite. When one team is up to bat and screaming the other fans are silent to be respectful. I thought that was really sweet.

JN: When is more music coming out?

ML: Soon. You heard it here first! I am working on a new album and planning to have it done by the fall or winter. The first single will be out in June. It will be a fun summer song with a really cute music video. I am in full speed with the new album.

I am working on a new collection of poetry and some fashion stuff so I am busy!