I don’t think we would have the success that we have if we didn’t have the connection we have among the cast. 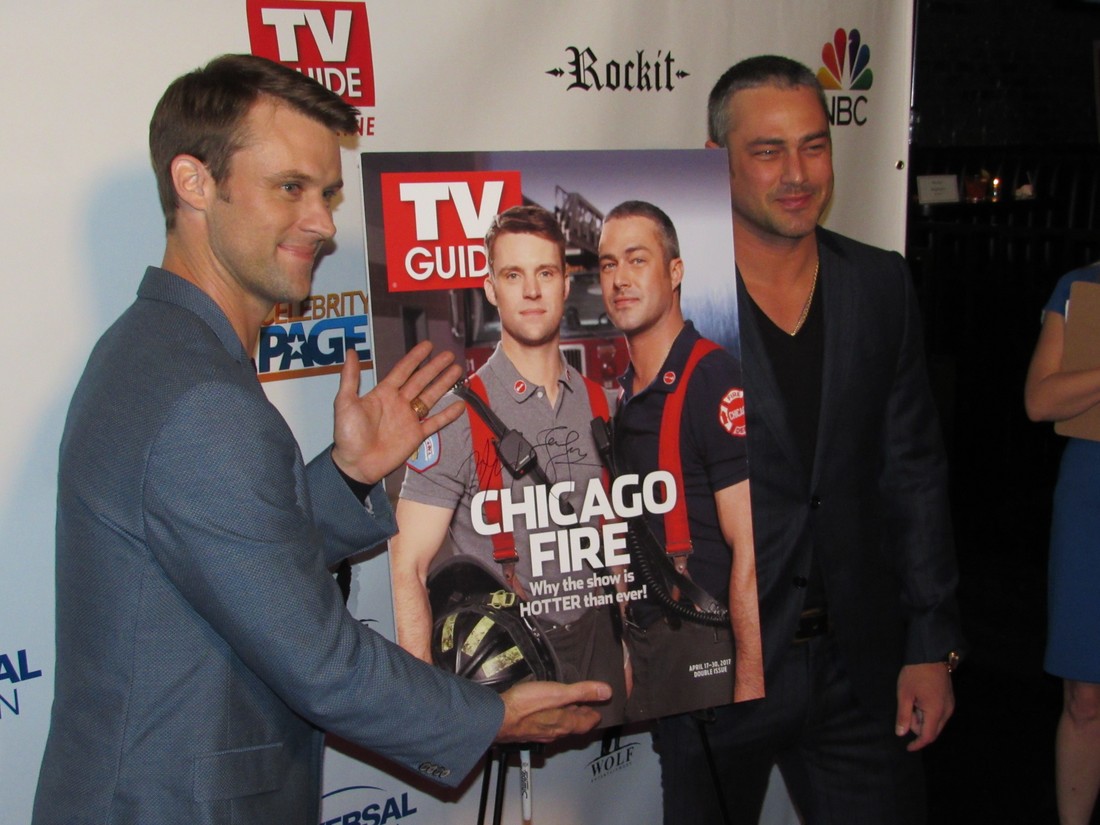 Chicago Fire continues to combine action and drama on television screens now for five seasons with no apparent end in sight. Fire was the first installment in a Chicago TV franchise that has now expanded to Chicago Med, Chicago P.D., and Chicago Justice.

Recently they spoke to Nunn on two red carpet events, one for ChicagoMOD Magazine at Morgan Manufacturing, and one for TV Guide at RockIt Ranch.

JN: (Jerry Nunn) Give me your her-story, Miranda Rae Mayo.

MRM: (Miranda Rae Mayo) My name is Miranda and I came from my mother's vagina. I sprouted out into the world and wound up growing into about 5’9”!

Originally I am from Fresno, California. I moved to Los Angeles when I was 20 years old on my own. I lived there until last year when I got this job. Now I live in Chicago.

JN: Sounds like a big change. How is that going?

MRM: So much better than I ever could have known. It is nice to be secluded in our own little eco-system of Chicago. The casts of every show are like a big family. Everyone is so supportive. It is really grounding to be out her in Chicago versus grinding it out in LA or New York.

JN: You are living in Chicago permanently?

MRM: I singed a lease, baby! I still very much a gypsy because that is how the life of an entertainer goes. The lease was signed in Wicker Park.

JN: Are fans chasing you down the street yet?

MRM: No, but this is the most I have ever been recognized for anything in my life. Nothing like Taylor over there.

JN: I will ask him about it. What can you tell people about your character on Chicago Fire?

MRM: Stella is one of the bravest people I have ever portrayed. She is an orphan. She had a rough beginning early in her life. She was in a really volatile relationship with an addict. She used to be an addict but is now a firefighter. She has found a home at Firehouse 51.

JN: Monica Raymond was our Pride marshal. Any plans to do something with her?

MRM: She has already become one of my role models, and mentor. She is one of my favorite actors and entertainers. She is so talented. Her work ethic is insane. She is the most humble woman’s woman. It is really important to bring talents women together. In an industry where that is rare.

JN: What do you do during your downtime?

MRM: We don’t get a lot. I do yoga and meditate. Meditation I feel will change the world. There is an organization called the Holistic Life Foundation out in Baltimore that is introducing meditation into schools, and prisons. They got rid of the school detention and replaced it with meditation and there have been no suspensions.

I am going out there the end of this month to train and work with them.

I also do music. I am a singer/songwriter. I just did a show at

Davenport’s. We sold out, so that was cool.

JN: Hi, Taylor. I remember interviewing you a long time ago and you were the nicest guy. How do you stay grounded with the success of Chicago Fire?

TK: (Taylor Kinney) I grew up in humble beginnings.

JN: So you didn’t caught up in the LA life?

TK: No. I am fortunate to do what I do. I fell into it later. I was a sophomore in college when I got into theater.

JN: How has your character changed over the seasons?

TK: It is just an evolution of character. For fans of the show they watch they see what people go through. They see life changes. I trust the writers and the people I work with. Hopefully we are telling good, honest stories. We are also accentuating the craft of fire fighting.

JN: I hear from different cast members that everyone is like a family.

TK: To reiterate what I said much earlier, the reason why we bring up being a family and that culture is because it is true. I don’t think we would have the success that we have if we didn’t have the connection we have among the cast. Our core group and the people that started from the beginning have been with each other since 2012. For the most part everyone is a transplant outside of Chicago, Christian Stolte, David Eigenberg, Joe Minoso, Yuri Sardarov, a couple of those guys have family in Chicago, and some roots, but the rest of us such as Jesse Spencer is from Australia, I am from Philly, Monica Raymond is from Florida, a lot of people are transplants. To come here and bond together is important. We have come here to curate something that is going to last and is something special. A testament to that is just look at the four shows that have spinoff from us. I feel very proud and humbled to be a part of something from the get go.

JN: Monica Raymund and Sophia Bush have been very vocal about supporting LGBT rights. Would you be up for doing an event?

TK: No. My politics stay with me. I support Monica, Sophia, and everyone’s right to free speech and choice, but I am not a politico.

JN: Have you had any crazy fans?

TK: If someone comes up to me, and wants a picture I am always gracious. I will say hello to anybody. If people didn’t watch the show I wouldn’t have a job.

JN: Jesse, besides being on Chicago Fire, are you planning on more singing?

JS: (Jesse Spencer) I need to get my band here. We have been talking about it for a long time. We played at The Vic in 2011 and the Taste of Chicago. This is one of the best audiences we have ever played for. It was a lot of fun. I hope we can get them back out here, maybe this summer.

JN: Has there been anything comparable to Australia in Chicago?

JS: Yeah, a lot. That is why I love it. It has a great public transport. Coming from LA that is a bonus. They love sports, and they are not afraid to have a good time. I love the bars and the nightlife here. The food is great.

People are friendly and have been very welcoming, which is great for me. I am an Aussie playing an American firefighter so any support from the local community has been great.

JN: Is the Chicago accent hard for you?

Chicago Fire turns up the heat on Tuesdays on NBC at 9 p.m. central.