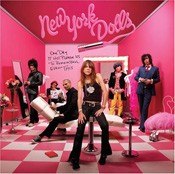 The New York Dolls weren't the first rock stars to wear makeup and women's clothes. Little Richard probably gets credit for that. What the Dolls did do first, though, was to infuse rock music with a kind of raw attitude and anarchic energy that has since become the spiritual thread that ties all modern rock bands together. The Dolls were punk before there was any such thing as punk, and their fast and furious take on rock produced two bona fide classics, their 1973 eponymous debut and the follow up, 1974’s Too Much, Too Soon. Critically acclaimed but woefully underappreciated commercially at the time, the Dolls lasted another couple of years in various incarnations before breaking up for good in 1977.

Subsequent years saw Dolls leader David Johansen embark on a solo career, including a trip up the pop charts during the 80s as the lounge-singing Buster Poindexter.

Now, fast forward all the way up to 2004, when former New York Dolls fan club president Morrissey asked the band if they would regroup to play at the Meltdown Festival, a rock show he was curating in London that year. "Basically we got together to do a one off show and have a coupla laughs," says Johansen. "We were having so much fun, we decided to continue past the summer, and naturally, started writing some new songs." Johansen and original guitarist Sylvain Sylvain form the core of the new New York Dolls, with replacement members more than capably filling in for departed legends like Johnny Thunders, Jerry Nolan, and most recently Arthur "Killer" Kane. "It won't be very long that we'll be together longer than the original band was," Johansen laughs.

The new album, One Day It Will Please Us to Remember Even This, released July 25 on Roadrunner Records, features 13 new tracks, including the new single "Dance Like a Monkey." The album also boasts guest performances by Michael Stipe, Iggy Pop, and Bo Diddley.

Here, the gravel-voiced Johansen, speaking with an accent straight out of his native Staten Island, talks about the origins of his band's cross-dressing style, his celebration of a "third sex," and his thoughts on gay marriage.

Q: Why do you think the New York Dolls have had such a large influence on other bands over the years?

DJ: Several factors, but musically, we all had specific ideas about what a rock and roll band should be. And we all brought those ideas—and of course our similarities—to the band, and we didn’t really pay any attention to any of the sounds or trends that were happening around us at the time. We didn’t do any demographic research—we just made the music that we wanted to make. And because it didn’t sound like anything else, it was startling. It was almost like folk art—it wasn’t made to fit into any commercial genre.

Q: Of all of the bands that have been influenced by you, are there any that are favorites of yours?

Q: The New York Dolls have always had a strong sexual vibe. Was there something specific you were trying to say about sex, or about the connection that sex creates between two people, back in the 70s?

DJ: From my personal perspective, there was a big celebration of sex going on. All of the music that I ever thought was good, as far as rock and roll or pop, was sexy. I never dug sexless music. You know, when I was a little kid, I just loved Little Richard. He didn’t just crawl out there and sing a song. He really partied it up and made it really campy and sexy and fun.

Q: In the 30 years since the New York Dolls first came onto the music scene, pop culture has been inundated with androgynous musical groups, singing drag queens, and hair metal bands that look prettier than many female pop singers. But what was it like back in the early ‘70s, before all of that, when you were coming onstage wearing makeup and women's clothes?

DJ: Well, when I was about sixteen, I joined up with the Ridiculous Theatre Company. I was still in bands, but I would help make costumes after school. I used to work in the basement a lot, and I started noticing that there were these really garish costumes down there, made with sequins and sparkles. So, I went to a rehearsal, and I met [Ridiculous founder] Charles Ludlam and [writer and performer] Bill Vehr, and they had a profound influence on me, as far as how to put on a show. I never really acted in a Ridiculous Theater production, but I would be a spear carrier or had a bit part. But I would do lights, I would sound, I would play the guitar. I don't know, I was with them for a couple of years, and I just kind of, by osmosis, learned a lot about show biz presentation, and about different kinds of sexual and political ideas and attitudes. But also, at that time, in the East Village—it was the dawn of so many liberation movements. There was gay lib, there was women’s lib, there was macrobiotic lib—whatever you could imagine, a liberation movement would be sprouting there. And we were essentially the band of the East Village, so we were entertaining all of these people. And to me, the obvious place to go was to create a kind of "third sex," as far as self liberation is concerned, being that everybody has male and female characteristics. We should be celebrating that as opposed to stuffing it. I thought that was good idea to celebrate onstage.

Q: Well, you definitely tapped into something that ended up manifesting in our culture more and more over the years. Did anybody think, because of the makeup and the dresses, that any of you guys were gay? Did you ever get gay-bashed?

But we were like the toughest gang of dykes you ever saw, though, so if people came up to us and started something, they would normally regret it. I remember one time, I was standing on Third Avenue and Third Street, and I was with David Bowie. We were trying to cross Third Avenue, and this truck driver drives by us. And I think he thought we were girls, and he started yelling at us, "I want to eat your c--t, baby!" And I said, "Oh, yeah, dude, well you’re going to have to suck my d—k!" And Bowie was saying, "Oh, no David, don’t provoke him!" And I said, "Listen, that's the way we talk here in New York." So, I guess people would say shit, but it didn’t really offend me or anything." You know, I was onto something, so I wasn’t going to let some idiot deter me from where I was going.

Q: It seems like a couple of the songs on your album are intentionally political, particularly "Punishing World," which has a bit of an anti-war vibe. One of the lyrics reads: "On the edge of our seats don’t know where it’s gonna go/Till we’re all throwin' bombs, screamin' on with the show in a punishing world."

DJ: That's right. But you know, each one of us creates a punishing world through our own perceptions and actions. So, what I'm talking about in the song are all the things we do to insulate ourselves rather than bringing people together. Each one of us is an active participant in the processes of creation and destruction. The only way the world is ever going to change is if everybody changes. But you can’t enforce change—people have to come to that conclusion themselves.

Q: There is a kind of world-weariness to a couple of songs on the album. I’m thinking mainly about "Maimed Happiness." Is that how you are feeling these days?

DJ: You know, even if the world was a utopia and everything was perfect, there would still be the concept of time. And whenever there’s time, there’s sorrow. So, the world's always going to be full of sorrow, but I think you can choose to live in a joyful sorrow. When I was a kid, I used to think about the world being perfect and how wonderful it would be. But on reflection, if things were great every day, and you had nothing upsetting to compare things to, then there really wouldn’t be any joy. So, that’s what that song is about.

Q: I guess it would pretty boring to experience orgasmic pleasure all of our lives [laughs]

DJ: Well, you know, people talk about wanting to have sex without feeling guilt, for example. And I’m not talking about intense guilt—I’m just talking about the typical sexual life, and how it goes—the post-coital feelings that arise. If there were none of that, then it would probably be like f—cking in a laboratory in Sweden with people in white coats standing around watching. It would probably be the most unsexy thing. You know, we’re always going to make sex as raunchy as possible to keep it fun.

Q: Last question: what are your thoughts on gay marriage?

DJ: What do you mean, what are my thoughts? Am I pro or con? See, I don’t really get the point about being married. But I can see how it might be attractive to people, especially if they haven’t tried it [laughs]. I’m being glib. But I think it’s a non-issue. People should be able to do whatever they want to do. The whole point of disallowing gay marriage is ludicrous. I mean, there are places in the world that are so far beyond us in that respect. For me, I can be glib and say, "Why would somebody want to be married?"

But if people have a relationship and they want to make it legal, they should—THINK TWICE! [laughs] No, just joking.