My Life With the Thrill Kill Groovie Mann

I used to go to The Baton to see drag. 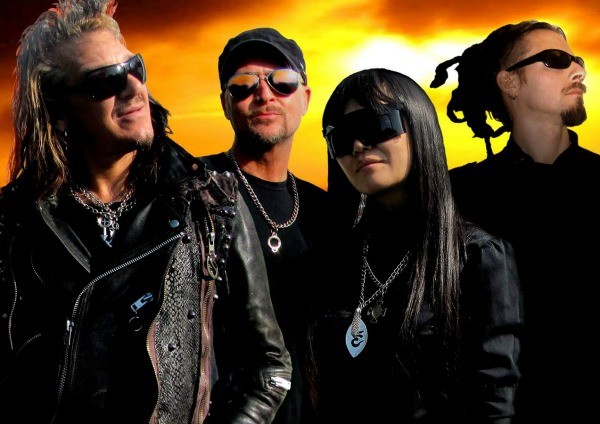 Gay frontman Frankie from the Thrill Kult comes back to town

Frankie Nardiello or sometimes known as Groovie Mann joind with Marston Daley or Buzz McCoy formed My Life with the Thrill Kill Kult after meeting back in 1987 while touring with the band Ministry.

They met some resistance from religious groups but their second album Confessions of a Knife became one of the best-selling releases on Wax Trax! They moved into disco sounds and became a bit more commercial for Interscope’s Hit & Run Holiday. While the lineup has featured guests over the years the duo have remained at the core of the act. They have toured for going on 28 years together and they bring their live show to the Bottom Lounge this month.

We caught up to Groovie Mann before his arrival.

JN: (Jerry Nunn) Where did you get the nickname Groovie Mann?

FN: (Frankie Nardiello) When we started the project we would just make up names to be someone else. On the one record that we got Marcy from, she sings on the “I Live For Drugs” sample, the hippie girl that is talking, she spoke of something groovy so that I where I grabbed the name from.

JN: Where do you get rights to all of the samples for your songs over the years?

FN: We slipped through the door since we were early starters with some of it. A lot of it comes from sources that are untraceable and some of it we created ourselves that sound like samples. Some of the stuff is our voices and noises that we made. It is all intertwined into what it is. We did pay for something when we were on Atlantic when we were doing those glossy albums.

JN: Talk about coming out as gay.

FN: I came out in Chicago. Back in the day everybody was out. There wasn't really anything like it in say 1977. Before that I ran in 1974 with some older friends when I was 16 and 17. I would sneak into Bistro to see my friend who was a dancer and see the bearded lady. That was my onset to the disco gay world. I remember the glamor and glitter of it all. That was a glam leftover then so dancers had crewcuts and black lipstick. I just loved all of that. I did get caught sneaking in a couple of times because it was across from the police station!

I used to go to The Baton to see drag. When I got a little older in my twenties I was terrified and attracted to it at the same time. The Gold Coast was very different back then, now it is very commercialized. Back then they thought someone could chain you up and beat you in that area!

JN: I bet John Waters was a big influence on you.

JN: What do you think of current music?

FN: Strange. Me and Buzz were in the truck a few weeks ago and he was playing something on the radio. It was weird. Pop music with old elements that was not really interesting, like Musak. It was background Japanese pop music. I don’t mean that in a bad way because I love their culture.

JN: You are touring with Spooky Tricks correct?

FN: We are doing two songs from it. We asked our fans on the website to send ideas for their favorite songs for us to play. We put the set together that way. We also dug out some things that we haven’t done in a while.

JN: The last time I saw the band in concert was in the ‘90s at The Riviera Theatre. Is there a large band like back then?

FN: No, we have condensed. Last year we had our full band and that is when we have Justin, who drums with Skinny Puppy. This year he was out with shows so we didn’t have a drummer. Our early mini tours were me, Buzz, and Mimi Star because it was all electro. Now it is me, Mimi, and Westin Halvorson, my guitarist so this has a different edge on it. It is still the Thrill Kill dance thing but we have guitars so there is a completely different vibe.

It is a full set and we have some new lights. For years we had so many lights but you get so saturated with it. We went back to basics.

FN: Yeah. I learned how to take of myself and stick to it because when we hit a regular schedule it is a show every day. On our days off we are traveling. It is still a life of touring but when you get older if you want to exist performing then you have to cut back. Nobody likes to see their favorite singer being sloppy. It works for a while. I’m not perfect but I have seen people slip over the years and it just bugs me. Their attitude can be cocksure and think their fans want to see that. No, they don’t. I have seen Patti Smith pretty sloppy in her day and Lou Reed coming out drunk and kicking his guitar cord out one year. Did you see Lenny Kravitz big debut?

JN: I did. That was quite the pants rip there. Do you feel you have to perform “Sex on Wheels” every concert?

FN: No. We are pretty casual about the set. I don’t mind doing it. I think it is unfair to say that I am sick of anything but I get used to it. Even old songs that I haven’t done for 25 years take some polishing up.

FN: That is in the set. “Bella Piranha” is in there. That one is so much fun to do!

Find your Thrills at the Bottom Lounge, 1375 W. Lake St. on November 15 at 9 p.m. Look for tickets at bottomlounge.com and keep up with the Kult at mylifewiththethrillkillkult.com.