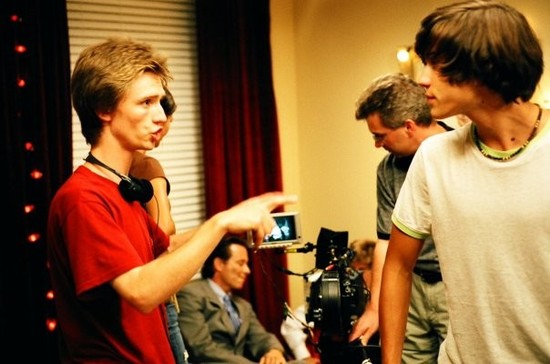 eberl on set of choose connor

Lucas "Luke" Eberl was just a little boy from Boulder when his mom started driving him from Colorado to California for pilot season auditions. Yet even then he had stars in his eyes—movie stars.

As a child-turned-young adult, Eberl's TV and film acting credits include Boston Public, Judging Amy, Planet of the Apes, and Touched by an Angel, as well as over a dozen others. Acting lent itself to screenwriting, producing and directing short films in 2002 with the release of his first short, Incest. At 20, Eberl's first feature film, Choose Connor-—a movie about one teen's commendable and/or corrupted coming of age under the influence of U.S. Senate Candidate Lawrence Connor (played by Stephen Weber)—-started collecting film festival placards from around the world, one of which reads, "Best American Independent."

"As a young person in a world filled with corruption, war, murder, exploitation [juxtaposed against] being the change you want to see-—I don't have the answers," Eberl says of his inspiration for Choose Connor, "but I wanted to make an allegorical film about these issues." Then, Eberl pauses. "I don't know if I'm making any sense. Sorry, I was home schooled."

According to Eberl, audience feedback for Choose Connor has ranged from post-screening vociferations of "You're evil" to standing ovations. Nevertheless, Eberl says, "The surprising interpretations of the film have all been very gratifying."

Q: What's the difference between a politician and a prostitute?

A: [Laughs] A prostitute puts their money where their mouth is... [Laughs again] ...I've never gotten such a question during an interview before. I'm sure if I had 15 minutes, I could come up with a wittier answer.

Q: What's the difference between George Lucas and Lucas Eberl?

A: George Lucas is a much smarter film maker, and he has a much longer beard.

Q: Of the Republican Party, the Democratic Party and the White Party, which has the hottest guys and the best music?

A: Of course the Democrats have better music. It's been redefined as the "Youth Party" with Obama. [Editor's note: Eberl later mentioned that he thought the White Party was an independent political faction, and didn't know that it was a gay circuit party. Remember, he just turned 21 in March-—JPF]

Q: What would Connor say about Proposition 8 passing?

A: Connor would find a way to say a lot of words without saying anything, like, "The voters have spoken their minds and we'll see how it plays out from here." Or something like that.

Choose Connor will be released on DVD, January 2009. www.chooseconnor.com