The whole concept of the show was about being authentic and connecting with these songs. 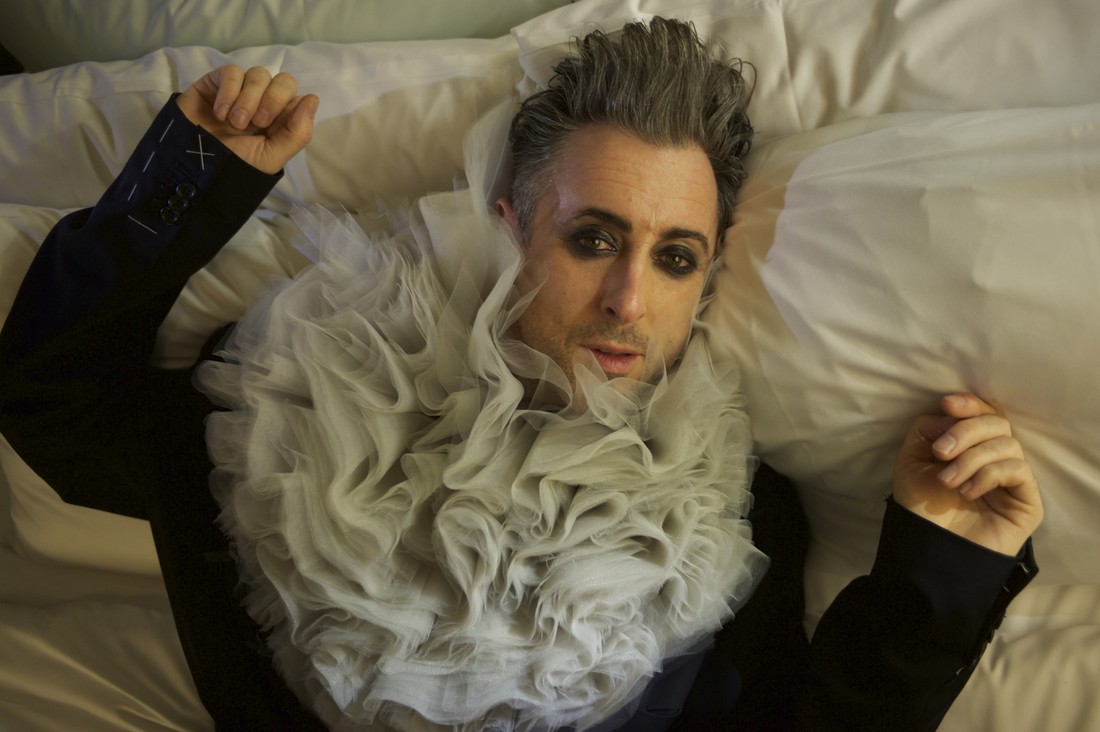 AC: It was because I feel the songs and the show are so connected. I feel they’re emotional songs that I chose because I have some connection to them. I feel that they actually work best in that moment with an audience. Usually, there’s a story I’ve told that leads up to why I’m singing the song. The whole concept of the show was about being authentic and connecting with these songs. The best way to do that was in a room with an audience and for people to listen to that.

GS: Would you please say something about your use of the word “sappy,” which has a positive not pejorative meaning in the context of the album’s title?

AC: It’s interesting, for me sappy means sentimental and something that gets you in your heart, gets you emotional. That’s what I mean. Also, of course, it means that I’m slightly setting up the audience that there’s a bit of fun involved, as well. “Don’t be so sappy” is kind of a nice way of saying to someone, “I get why you’re being emotional about this, but don’t go too far with it.” I’m saying to the audience, “Be warned – you’re going to be moved, but at the same time it’s going to be a lot of fun.” That’s why I did it. I like alliteration as well. But, also, these are songs that I find have a message in them that is a lovely sentiment and is often intensely emotional.

GS: I’m glad you said that, because one of the things that I found surprising about the song selection on …Sappy Songs is that you sing not one, but two Billy Joel songs, “Goodnight, Saigon” and “And So It Goes.” Do you think Billy Joel gets the respect that he deserves?

AC: Personally, I don’t. I think he’s an amazing songwriter. Because what I think he does is capture a feeling in his songs. He captures emotion. “Goodnight, Saigon,” is an incredible song about war and about how it damages people and how people would get PTSD, and also how people are so disregarded by their governments. “And So It Goes” is such a beautiful song in terms of it saying that you’re always going to be able to love again. The idea that even though things have happened to you and you’ve closed off, one day you’re going to say, “OK, you can break my heart if you want to. I’m ready for it.” It’s something we’ve all done and we can all relate to and yet it’s very intricate and detailed. I think he’s a genius and I love singing his songs. I’m looking forward to singing more of them. I think sometimes when you know songs from someone who’s a singer/songwriter that maybe their style or the time they were recorded evokes something in you that is actually different from what the song is, or could, be about. I’ve always loved Billy Joel and going back and listening to his songs again I’ve rediscovered an appreciation for what a poet he is.

AC: Maybe. There are others I would like to do. It might be something I do in the future, maybe for my next show. “Billy and Alan.”

GS: You also found a place for Stephen Sondheim in the show. What does Sondheim mean to you as a performer?

AC: He’s incredibly clever and incredibly full of ideas that are so stimulating. The song I sing, “Ladies Who Lunch,” I sang in a workshop version of Company where some of the gender and the sexuality of some of the characters were being changed. I was playing the Elaine Stritch role. That’s why I started singing that song. In the course of working on it, I’d always loved the song and Elaine’s interpretation of it, but after looking at it for a few weeks (I discovered that) it’s not actually at all what I thought it was about. With all of these songs that are well-known, I think I’m trying to say, “Listen to this again. It might not be what you thought.” This is a huge example of that. It’s a searing, lashing out at everyone. It’s not just about the ladies who lunch. (I think he’s saying) the people that you might mock the most, give them a break, it’s hard for everyone. It’s beautiful and much more nuanced and detailed. It’s not a funny song, but I love the fact that the second line is “Everybody laugh.” When I do it in concert, (sings) “Here’s to the ladies who lunch,” usually there are a few titters, and then comes “Everybody laugh,” and I think the response is, “Oh, it’s not what we thought.” I’ve never performed in a Sondheim show and I’ve only performed a few of his songs in public, and this one I’ve recorded and I end my show with it . I drink an actual martini while I’m singing it.

GS: It doesn’t hurt your throat?

AC: No, but I do feel pretty smashed. I slug a whole martini during the course of the song [laughs].

GS: I also appreciate the way that you worked popular new songs into your repertoire, including tunes by Rufus Wainwright, Keane, Miley Cyrus, Adele, Lady Gaga and Katy Perry. How important do you think it is for cabaret artists to include that kind of contemporary material in their sets?

AC: It’s important for me. If you are a cabaret artist and you are mostly singing other people’s songs, you’re asking them to rethink a song, listen to it in a different way. The most impact you can have while asking them to re-listen to a song is if it’s a song they know very well. Often for me, if I hear a song I know, it clicks for me and I hear it in a different way and I think, “I could sing that song. I’ve got something to say about that song. Wanting to connect with an audience and wanting them to rethink songs; it is actually important to do songs they’re familiar with. Also, I love those songs. In a way, I think I’ve changed people’s perceptions of what a cabaret show like this could be.

GS: Earlier this year, the music world suffered a great loss with the passing of David Bowie. Do you have a favorite Bowie song?

GS: Do you think you might cover a Bowie song at some point?

AC: I would love to sing some of his songs in the future. I’m actually going to do a project later in the year, a cabaret based on a painter. The painter had lived in Berlin and Bowie is so connected to Berlin. I’m just forming that show in my mind right now. I was so lucky I did a little bit of that Lazarus show at (New York) Theater Workshop. I knew him a little bit over the years. One of my most prized possessions is this email from him – I actually laminated it [laughs] – after he came to see me in Macbeth. I was so blown away – he wrote me this really beautiful email about my performance.

GS: On …Sappy Songs you make mention of The Good Wife. It was recently announced that The Good Wife would be coming to an end. What has being a part of that show meant to you?

AC: it’s been an incredible thing for me. I think it’s such a well-written show. To play a character for that length of time who is so loved. I think Eli’s a great character and I am so happy to have been able to play him. To be in a show that is so nuanced and doesn’t tell people what to think – I think it’s actually morally ambivalent – and I think that’s really grown up. I’m full of praise for the writers. Also, in a personal way, to be at home in New York for nine months of the year and have that stability and structure and financial security has been a great thing. It’s enabled me to have the time and luxury to do lots of other things like this (cabaret) show. I probably wouldn’t have been able to write my book if it hadn’t been for The Good Wife. It’s allowed me to be very creative while doing something that I really enjoy and that I’m proud of.