Best of the Fest: an interview with Michael Kutza of Chicago International Film Festival

If I look at some of the films today, including Brokeback Mountain, doesn't the gay hero die at the end? 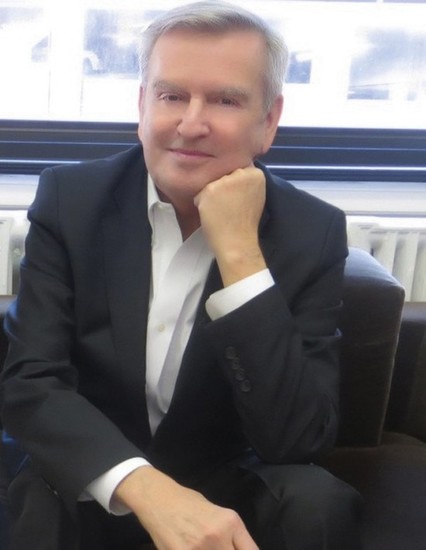 Michael Kutza, founder and artistic director of the Chicago International Film Festival, reason to celebrate this year. In addition to the Festival reaching its 49th year, the LGBTQ programming has been renamed as OUT-Look and features more than a dozen titles. Additionally, an entirely separate award, the Q Hugo, and awards ceremony (scheduled for Oct. 21 at 6 p.m at Center on Halsted, 3656 N. Halsted), have been designated to mark the occasion. I stopped by the Chicago International Film Festival office in October to speak with Michael Kutza.

GS: I remember seeing the British film Nighthawks, at the festival in 1978. Do you remember what that first queer title at Chicago International Film Festival was in 1969?

Michael Kutza: It was called Monsieur Hawarden (directed by Harry Kumel). It was about a woman disguised as a man. It was a famous real story. It wasn't that I chose these films because they were gay. The sensitive themes of all these things always interested me. There's been some great stuff over the years. When you put it together it does look like we focused in on a lot of gay things, but I didn't think of it that way. I thought of how important these themes were.

GS: How would you say these films were received over the years?

MK: I have to tell you something. Way back, (film critics) Gene (Siskel) and Roger (Ebert) were on many (Chicago International Film Festival) juries in the ‘70s and ‘80s. Roger was open to everything. I wouldn't say that Gene was homophobic, but he would say, in print, that the festival shows too many gay films. Roger would come back in the newspaper, saying, out of the 75 films, five of them might have gay themes. So, what are you talking about? Gene would fight back. And then he would shut up years later, because suddenly these subjects are accepted. He changed his mood about things.

GS: You said that the themes were what spoke to you. What were some of the other criteria?

MK: They were all brand-new, first time directors and the subjects interested me. All these different countries of the world, whether they were Fassbinder in Germany…many of them were, of course, Fassbinder. (Refers to list of LGBTQ films screened at Chicago International Film Festival) just going through these names, Fassbinder came up so many times. The Wounded Man (from1983), directed by Patrice Chéreau, was a wonderful film about a kid who turned out to be a hustler in Paris. A really sensitive, torn up kid on the streets, but a beautiful film. Patrice was the president of our jury last year. He just died two days ago of lung cancer. He did many sensitive films of that type. He never really came out as gay, but he always had sensitive subjects such as that.

GS: Of course, since 1969 was the year of the Stonewall riots. How would you say that LGBTQ film has evolved over the period of 44 years?

GS: Do you think it has?

MK: If I look at some of the films today, including Brokeback Mountain, doesn't the gay hero die at the end?

GS: Much less than they used to.

GS: We're not talking about the days of (Lillian Hellman's) The Children's Hour. Do you really think queer films need tragedy?

MK: I know that we have about 10 films this year, from Poland and other countries, and they are beautiful. Gorgeous, sensitive. Every single time, I'm noticing in the finale, in the last reel, that something tragic happens to the gay hero; even today.

GS: For the 49th Chicago International Film Festival, a rebranding has taken place in terms of the LGBTQ program, which is now known as OUT-Look.

MK: We started including a section that we called OUTrageous, probably a couple of years ago. That was a big success. Then we said, why don't we start bundling the film seems? We decided to call it OUT-Look because OUTrageous was a little condescending, I think. Because they're not La Cage Aux Folles, they're not flamboyant. Some of them are sensitive, some of them are crazy. I've been part of the Teddy Awards (for LGBT film) at the Berlin Film Festival for so many years. We (Chicago International Film Festival) have a competition for (categories including) After Dark, women's films, Black Perspectives, so why don't we give an award to gay and lesbian themed films? We've got a great collection of films. We're doing a whole show (for the Q-Hugo Awards). It's a big deal at the Center On Halsted. We're honoring (Hong Kong filmmaker) Scud who makes films with sensitive themes and beautiful men who are in love.

GS: Reeling, the Chicago LGBTQ International Film Festival went on hiatus in 2012 and is returning in 2013. As the creator of a long-running mainstream film festival that includes LGBTQ titles, do you think it's important for a separate LGBTQ film fest to exist?

MK: The more the merrier. My only advice would have been, since they took a hiatus, they had a beautiful moment and really could've moved it into a different time of year and think it out better. I'm glad they moved to one week, it's very difficult to do two weeks. It's tough. I think it would succeed in the spring nicely.

GS: Did Chicago International Film Festival ever consider taking over Reeling at any point?

MK: No. My theory of the festival from year one, I know it's difficult for people to want to see foreign films and read subtitles. From the very first festival, I've always put in a little bit of Hollywood and sometimes stars and big directors to tempt you to come see the new Polish film or the new Romanian film or the new French film or this or that film.

GS: Many gay people like going to the movies anyway, whether or not it has a gay theme.

MK: And they can read subtitles, too [laughs]!

GS: Next year is the 50th anniversary of Chicago International Film Festival. Can you tell me what you have in the works to observe such an auspicious occasion?

MK: We're starting to plan, of course we are. The toughest thing, and that's what Reeling found out, is finding sponsors. I'm sure that's rather take a year off. It's very hard to find sponsors to do anything anymore. We had our opening night at the Chicago Theater. It was amazing, spectacular. In my introduction, I said (to the audience), you had a choice tonight. You could've gone to the opening night of Hubbard Street at the Harris, the Bears game, the simulcast of the Chicago Symphony playing for free in Millennium Park, and you came here. All of us are nonprofits looking for sponsors. It is not easy. We are an audience driven festival, but we all have to find the sponsors. Once they're on board, they love it.

GS: Fifty years speaks to you doing something right.