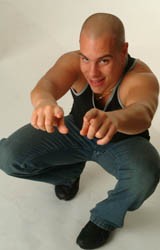 Jeff Jonas, better known as DJ Escape, has been appearing in cities all over the world, mixing his special blend of tribal beats, acapellas and original tracks. Working with such masters in the studio as Junior Vasquez and Guido Osorio, Escape is credited with many hit tracks over the years, including "Wer*ship", "People Get Down", "Music Take Me Higher" and "Finally 2000" (Cece Peniston). With his recent launch of a new record label with Guido, you can expect to go on many escapades with him in coming years.

GD: What inspired you to become a DJ?

E: At first, I started doing hip hop & reggae and wanted to be able to scratch and cut up all the hip hop records and breaks. When I made the transition to dance music, my inspiration was Junior Vasquez.

GD: Who else has been a musical influence to you?

GD: I had the pleasure of hearing you again when you spun in Chicago last month. Your mixing involves a great deal of layering and blending. How would you best describe your style?

E: Tribal beats, mixed with some vocals, either in the form of hard-driving mixes or playing acapellas over the beats and creating my own mixes as I go along.

GD: How has your sound evolved over the years?

E: Years ago I had a New York style, whereas now my sound is more worldwide from playing in places like Italy, Ibiza, Japan, Australia… It translates to more than just the U.S.

GD: Moving onto your CD's, your most recent release is a dance compilation on SPG Music called Circuit Party - Volume 8. Is that a good example of your musical style or is the track selection more influenced by what has commercial appeal?

E: Yeah, that release is the closest to hearing my DJ style but I wouldn't say it's the same as spending a night with me in the club. A lot of the tracks are selected for commercial appeal, with many vocals, and the mixing is more straightforward than when I play live.

GD: What about your DJ name – where did that originate?

E: That emerged from two things… One is a reflection of when I'm DJ-ing, it is an escape into the music. The other is my personality – I'm always escaping from one thing into another.

GD: What about club residencies? Where have you maintained a regular spot?

E: Liquid in Miami – that's what gave me my break and was my first big residency. Now, I'm a resident on Sundays at Crobar in Miami and Avalon in Boston, and Splash (SBNY) on Saturdays.

GD: A majority of the places at which you spin have a predominantly gay audience. Do you notice a difference in the crowd's response to your music at gay events as compared to straight ones?

E: Absolutely. Straight kids want to be pounded by heavy-hitting synth beats. Gay boys are more relaxed and into tribally vocals, so they are more responsive.

GD: How about the music industry in general… If you could change one thing, what would it be?

E: The killing of mp3 downloading… Technology is great, but it has downfalls and that's one of them.

GD: What about the club scene… with recent club tragedies, enactment of the RAVE Act and the crackdown on clubs… Has that had an impact on your view of the scene or your enjoyment of spinning in large venues?

E: No, it hasn't affected me personally. But in New York, there's really nothing going on right now.

GD: In Chicago, it's much the same…. Turning to your production work, out of all the tracks that you have done, which ones are your personal favorites?

GD: What about any new tracks that you can tell us about?

E: Guido and I just released the Kathy Brown track and we also just did "Little Bit of Loving", which is one of my favorites right now. The artist will be someone new and it will be released in the fall.

GD: I recently interviewed Guido and he spoke of some of your recent projects together. What do you enjoy the most about working with him?

E: He is such a talent. If something takes me 5 hours in the studio to translate from my head into the computer, it will take him about 5 minutes. He's such an amazing engineer. When I work with him, I bring my ideas, he translates, we sit together and edit… it flows so quickly.

GD: Have you worked with other remixers or producers? Are there any you want to collaborate with in the future?

E: I worked with Junior on several things years ago, which was great. I've done work with Johnny Vicious, Eddie Baez, and Razor & Guido when they were a team. I'm going to work with DJ Pierre very soon, which is exciting and should be something different for me.

GD: That could be a great sound. How about your new venture with Guido, starting a record label called Just-2Xist. Do you see this as more of a creative outlet for you?

E: I handle a lot of the business side, but it's really a creative focus for us to release tracks.

GD: Well, the first release, an updated version of Kathy Brown's "Turn Me Out", has retaken the club scene by storm. Are you happy with the response it has received?

E: Yeah, it's getting played everywhere.

GD: What other releases can we expect to hear?

E: A new song with Alan T that Guido produced. It's called "Grace to the Bass" and should be out this fall. Also, the "Little Bit of Loving" track that I mentioned.

GD: Many remixers don't get the opportunity to work directly with the vocalists. Are there any artists that you would like to work with?

E: I would love to work with artists, but my focus is more on the creative end. I would probably bring a vocalist to Guido because he's a maven in the studio in recording vocals.

GD: Any upcoming projects that you can share with us?

E: I've remixed a new Ceevox song, "Wired", but I'm keeping it to myself right now because it's one of my biggest records. Even Ceevox asked me for it and I haven't given her a copy.

GD: What does the future hold for you? Will you focus more time in the studio, on the record label, in the clubs?

E: I hope to keep my current DJ schedule, which anyone can check out at www.djescape.com. I hope to keep it packed with events, one or two places every weekend, and eventually I'll spend more time in the studio.

GD: Well, that seems to cover it. Thanks for your time and we look forward to hearing you again in Chicago.