Like a lot of gay guys, I was in love with a straight guy when I was in high school. 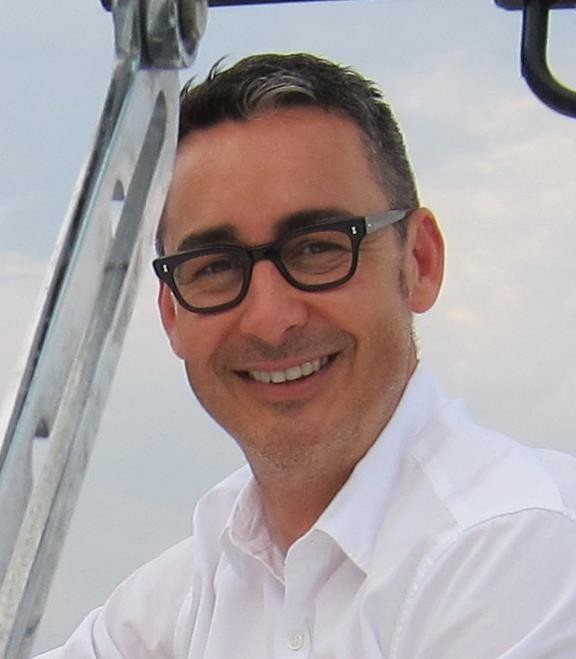 Even the most jaded viewer can't help but be charmed by the sweet, gentle, big-hearted 2000 film Big Eden (Wolfe), available now for the first time on Blu-ray. In it, painter Henry (Arye Gross) is summoned to his hometown of Big Eden, Montana, when his grandfather Sam (George Coe), aka Sampa, his only surviving relative, has a stroke. Much to the dismay of his friend and gallery-owner Mary Margaret (Veanne Cox), Henry leaves New York just days before his big gallery opening.

When he gets to Big Eden, all sorts of old emotions are dredged up, especially when he learns that Dean (Tim DeKay), the love of his life, has also returned to Big Eden as a recently divorced father of two young sons. Meanwhile, very shy general store owner Pike (Eric Schweig) has also taken an interest in Henry, complicating things considerably.

For his film debut, gay writer/director Thomas Bezucha populated the fictional town with wacky characters, most of whom appear to be descended from the same bloodline of folks that populated Cicely, Alaska, in the popular `90s television series Northern Exposure. Still, it's a pleasure to watch characters you might assume to be close-minded and out of touch open their hearts and minds to love in whatever shape it takes.

In addition to the mouth-watering food sequences, the dazzling performances by the lead actors, supporting performances by Louise Fletcher and Nan Martin, make one feel as if they spent a couple of hours in paradise. Bezucha, who also wrote and directed 2005’s The Family Stone, starring Diane Keaton, Sarah Jessica Parker, Claire Danes, Rachel McAdams, Dermot Mulroney and Luke Wilson, spoke with me about Big Eden  and more in October 2015.

Gregg Shapiro: How much of Tom is in Henry, the main character in Big Eden?

Thomas Bezucha: It’s certainly not my story, but I definitely had the fantasy, when I was living in New York, of moving to Montana. The whole thing was an exercise in some fantasy that I had of moving to Montana to teach art at a high school. When I was living in New York, that was my escape fantasy. And I love the idea of somebody cooking for me. And, like a lot of gay guys, I was in love with a straight guy when I was in high school. Throw that all in the mix and there you go.

GS: Did you have a relative like Henry’s grandfather Sampa in your life?

TB: This is so funny – what a great question. In spirit; my father’s father was never as articulate as Sampa was, or as aggressive about finding something out. But I remember when I was maybe eight years old. When we’d go to visit my grandparents, we went to the grocery and we could buy any kind of cereal that we wanted. I wanted a box of Honeycomb because it had a picture of David Cassidy on it. I was in love with David Cassidy. My grandfather bought me the box of Honeycomb. The next morning at breakfast, he got a giant Tupperware container, poured all of the cereal out of the box, got a pair of scissors, cut the photo off the back of the box and gave it to me and said, “Here’s that guy you like so much.”

GS: I just got goose-bumps from that. That’s amazing

TB: Right! So I guess I was honoring my grandfather.

GS: Big Eden is not your average representation of gay men. How important was it to you present a less visible segment of gay culture?

TB: [Laughs] it weirdly became more important as we were casting. I think Jen (Chaiken) my producer, for whom I am so grateful for her support while we were casting. Arye (Gross) was exactly what I had in mind as I was writing. We definitely wanted kind of an average-y person. The part of Pike was vaguely Native American, but then I felt it was important to cast a Native American actor. I think that’s part of what people responded to at the time, especially when we were going to the film festivals. They weren’t gym bunnies. I felt like that was keeping with the spirit of the movie itself – we’re everybody. I’m you, you’re me, we’re all part of a community and everybody comes in every shape and size. This is so weird, but I remember while we were shooting, that Louise Fletcher (who plays Grace, a teacher), in her Academy Award acceptance speech for One Flew Over The Cuckoo’s Nest…

TB: Yes! I went to her and I asked her if she would feel comfortable signing with a deaf child and she said, “Of course!” We found a deaf girl to be in the classroom. You barely see it. It’s in the corner of your eye.

GS: I definitely noticed that.

TB: It was a way to say we come in all kinds of packages.

GS: One of the things that Big Eden does beautifully is capture the energy of sexual longing and desire, through meaningful glances and hesitant physical contact.

TB: [Laughs] it’s the story of my life [laughs]. That’s the fun of it. Those are the movies I grew up on, the Hayes Code movies. I love a chaste romance, that’s for sure. That was also maybe one of the things that people responded to at festivals was that they’re not fucking all the time [laughs]. This is so crazy – that’s how long ago it was – but I can’t even remember who was President. Was it Bush?

TB: One of the things I wanted to do was make a gay movie that you could watch with your grandmother. I wanted this movie to be PG. I was really incensed when I got a PG-13 rating. What about that is PG-13?

TB: Now? Now I think it would be a fight. You could argue and you could get a PG. If those guys were (a) straight (couple), it would be G-rated.

GS: Gallery owner and Henry’s best New York friend Mary Margaret (Veanne Cox) has some of the best lines in the movie. Do you have or did you have a Mary Margaret in your life?

TB: I have a Mary Margaret in my life. I’m godfather to her children. I adore this person. She’s not like that person, she just happens to have the greatest name. That character sounds more like I do in everyday life. What she shares with that character is the great name and she’s been a wellspring of support to me.

GS: You mentioned Arye and Louise, who were among Big Eden’s fantastic cast, also including  Tim DeKay whose gone on to become a bigger name. What was it like to work with those actors?

TB: They were very gentle with me [laughs]. The first day on set was the first day I’d ever been on a set. None of them were getting paid anything [laughs], that’s for sure. They came to the project because of the script. Because I’d written it, we could talk about the characters and they were able to figure out what to do. I’m grateful to them for their collaboration. We were lucky to have some rehearsal time in Montana before we began shooting. One of my favorite memories is the night before we shot the pantry scene between Henry and Dean – we’d had a really long day. Tim and Arye came to my room and asked, “Can we rehearse with you?” We worked on it for three or four hours. I loved how they wanted to get it right. They wanted to know what I meant. They had their own ideas and we figured this thing out together. I love those guys to pieces. They’re just wonderful.

GS: I’m glad you mentioned the pantry scene. There is a dramatic blowout scene set at Thanksgiving in Big Eden and your second feature, The Family Stone, has a similar dramatic blowout at Christmas. How do you really feel about those holidays?

TB: [Laughs] you’re so funny! You’re onto it! I really do love those holidays. My favorite sequence in Big Eden is them sitting at the table and there’s no dialogue. It’s my favorite thing I wrote. People looking at each other and you get what’s going on. If there was anything to be proud of, without the actors having to say anything, the audience knows exactly what’s going on. You’re laughing because you’re ahead of the characters. While I was doing the festival circuit with Big Eden, I sat down to write The Family Stone. I thought what am I going to do next? What did I love about Big Eden? Thanksgiving, everybody at a table, go! I built The Family Stone  out of that dinner table scene.

GS: I don’t admit this very often, but I’ve seen Big Eden a few times and it still makes me cry. The Family Stone was also a comedy and a tearjerker. According to the somewhat reliable source of the Internet, you are in talks to direct another tearjerker project, the movie adaptation of The Art of Racing in the Rain. Is that still in the works?

TB: I would love to do it. There’s a great script that I did not write. This guy I love, Mark Bomback, did a fantastic job on the adaptation. It is a tearjerker!

GS: So what do you like best about making audiences cry?

TB: It’s what I want. It’s why I go to the movies. I go because want to laugh and I want to feel something. The movies I remember are the ones where I cried like a fucking baby [laughs]. For me, the most satisfying thing in viewing a movie and making a movie is when you can pivot from a laugh to a tear and then back again. That’s so much fun.

GS: Are there any upcoming projects that you’d like to mention?

TB: There’s a book that just came out called Everybody Rise by Stephanie Clifford that I’m adapting for Fox 2000. I’m also working on a script with Maria Maggenti, the writer and director of The Incredibly True Adventure of Two Girls in Love. I know Maria because we were arrested together as part of ACT UP in 1989. We’re working on a gay period comedy.