I'm not very good at pretending to be someone I'm not. I'm an overly earnest and honest Midwesterner. 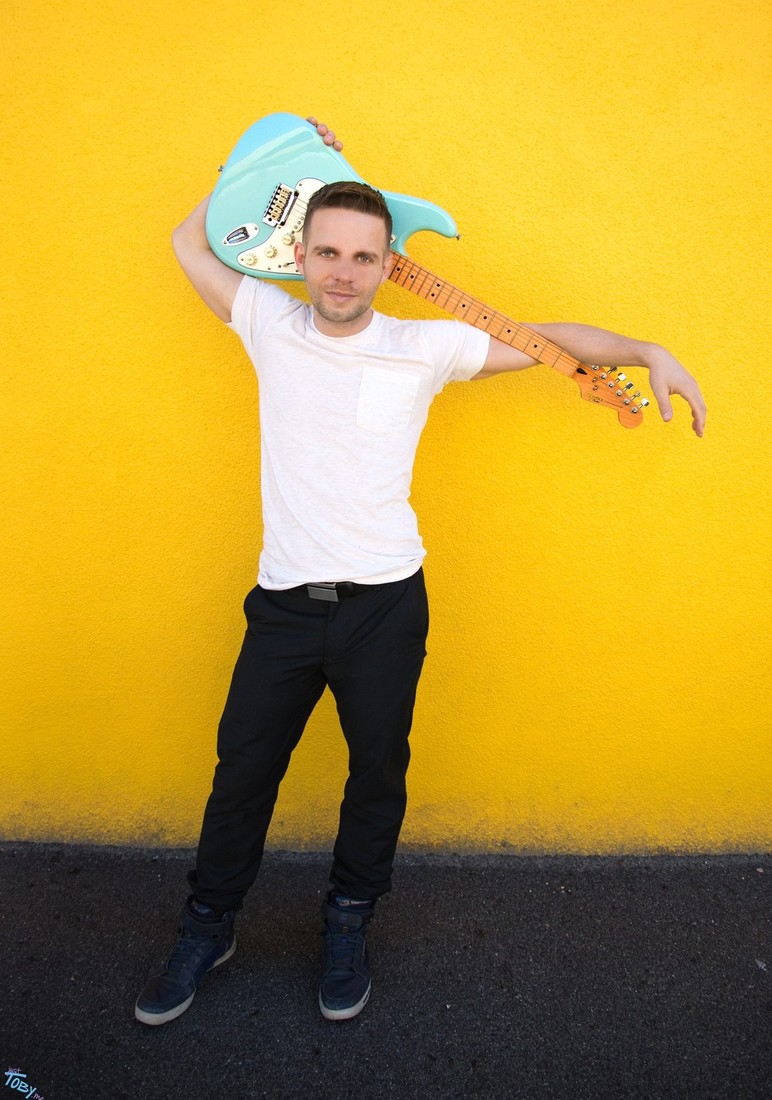 Out singer/songwriter, and now actor, Tom Goss wants to entertain you.

Tom Goss is the kind of artist who likes to keep his fans guessing. On his first few albums he played original, catchy acoustic pop. Then, in 2013 he collaborated with dance music legend Richard Morel for the irresistible and fuzzy club track “Bears” and its accompanying entertaining music video. On his new album Wait (tomgossmusic.com), Goss greatly expands his sound, incorporating more synthesizers as well as female backing vocals. The results are, well, definitely waiting for. In addition to a wonderful duet with fellow gay singer/songwriter Matt Alber on “Breath And Sound,” songs such as “It Only Takes One,” “I Think I,” “Deeper Shade of Blue,” “Falling” and “You And Me” combine to make Wait Goss’s best album to date. I spoke with Goss in May 2015.

GS: (Gregg Shapiro) Tom, when did you first discover that you could sing?

GS: (Tom Goss) If we're being honest, that's something I've always struggled defining. I don't have a traditionally beautiful voice. It's a voice that's a little rougher around the edges, a kind of working-man's, blue-collar voice. Early on in my career, I would do all I could to cover it, to sound more like I was “supposed to sound.” In the past couple of years, I've grown more comfortable with the uniqueness of my voice and have worked hard to shed the previously affixed filters, to be as authentic to my voice as possible. These days I'm grateful that I don't sound like everyone else, and I'm lucky to have a voice that is honest, and reveals the depth of my musical message. People love my music because they love my voice. I am very lucky.

GS: When did you write your first song?

TG: Almost immediately after picking up the guitar. It was my freshman year in college. I remember taking my boom box and a blank cassette into the bathroom to record it. I was convinced the bathroom was “best for the acoustics” of the song. I have no idea what the song was, but I'm sure it was horrible [laughs]! I wrote pretty horrible songs for about four years before I wrote anything worth listening to. There's a couple copies of Tommy G: Songs From The Burg floating around with my old college friends. Every now and again, when we're sitting around visiting, they'll pull out the record they found when cleaning and we'll listen. It's not pretty [laughs].

GS: Who are some of your musical influences?

GS: Right from the start of your recording career you were an out musician. Can you please say something about being a part of that community?

TG: I'm not very good at pretending to be someone I'm not. I'm an overly earnest and honest Midwesterner. I am very uncomfortable being inauthentic. Even more importantly, where would I be without my husband? He's the best thing that's ever happened to me, by like a million. I'm not sure there was any other option.

GS: Until recently, you lived in Washington, DC – the city where BETTY got its start in the 1980s and where musician/producer/DJ Rich Morel lives and works. What did being part of the LGBT music scene in DC mean to you?

TG: I love Washington, DC. I grew up there musically. It was everything I needed while I was finding my voice. I used to play three to four times a week, all over the city, pimping myself out on Myspace and just trying to make $20. There is a wealth of great musical history in town, and neighborhoods like (the) U Street (Corridor) just ooze artistry and integrity. I fully believe that DC is at the front end of a new artistic renaissance, artists are flocking to the city. Rich Morel is one of my musical heroes and I was honored to work with him on “Bears.” I can't say enough good things about Rich. Through and through, an amazing individual. His musical brain is unreal!

GS: Your new album, Wait, takes your sound to the next level. How did you approach making this album?

TG: I'm super proud of Wait. I think we really tapped into something fresh. In my previous records, I took the songs into the studio, hired a studio band, and got to recording. Often, I was hearing the songs as a full band, for the first time, while we were recording. I worked with some amazing players and we did some great things. However, for Wait I wanted to do things a little differently. First, I spent a year and a half writing songs for it; 74 songs to be exact. I really tapped into my writing brain almost every day and just wrote and wrote and wrote. I figured if I wrote 50 to 100 songs, 10 of them have got to be amazing, right [laughs]?

Secondly, I formed a band in DC and we chose the songs together. I brought them 30 or so and we immediately cut that number to about 20. Then we played those 20 as a band and it became obvious that a handful didn't work as well with a full band. We spent a lot of time fleshing out ideas and finally narrowed it down to a fairly long, but fast- moving 13.

Finally, I convinced my drummer Liz DeRoche to stay in the studio and mix with Mike Ofca and me. She's brilliant. She brought so much to the table. She writes and performs dance music so she's always seeing things from a different perspective. She played all the drums and keys on the record, as well as arranging most of the background vocals. She's one of my musical heroes as well; throwing her into the mix really helped us create some new sounds, bringing the songs to another level.

GS: "Wait," the title track, has a distinctly retro feel to it.

TG: Every day people tell me what's wrong with what I'm doing. They tell me I'm amazing, but If I change this one thing about me I'll be even more amazing. They tell me, their cousin’s best friend's roommate did this and they're now famous, etc. Being an artist is a profession where everyone else believes they are more knowledgeable than you at your craft, even though they themselves have no experience at it [laughs]. Furthermore, for some reason, folks really feel the need to vocalize those opinions. I'm not complaining, just explaining. I know that in many ways, that's what I've signed up for. Wait really is just me poking fun at that dynamic. They're just little tidbits of conversations where folks are telling me what I need to do to be famous. Stylistically, I'm not sure why I wrote it that way, just seemed more fun I guess.

GS: You recently expanded your performance talents by acting in Rob Williams’ movie Out To Kill. What was that experience like for you?

TG: I had a great time! It was fun to do something completely different, to dive into another art form and step out of my comfort zone. For me, Out To Kill was a perfect first gig because I had no idea if I could memorize lines. I don't have an acting background. Dying a third of the way into the movie made it much easier to say yes. Memorizing 25 pages is a lot easier than 90 [laughs]!

TG: Absolutely! Actually, I just moved to Los Angeles. I signed the lease on my place in February, so I'm definitely a newbie. I'm looking forward to exploring new and exciting opportunities in Los Angeles.

GS: You are going to be playing PrideFest in Milwaukee. Have you been a part of the Pride circuit throughout your career?

TG: For sure. Prides are great! I can't even tell you how many I've been to. Folks come out with fun and community on their mind. It's a time of year where everyone, all genders, colors, ages and sizes come together as one. I wish we celebrated pride more than once a year.

GS: You also have a personal connection to Wisconsin, having grown up in Kenosha. What does it mean to you come back to the area to perform your music?

TG: I love Wisconsin! I am proud to have grown up in Kenosha. The more time I spend away, the more I appreciate the life values that Wisconsin instilled in me. Whenever I'm back, I feel like there's a part of me that just let's go, relaxes and I feel completely at home.