Divalicious: an interview with Josh Berman of Drop Dead Diva

It's the first show I've ever worked on where guest stars come to us to ask to be put on the show. 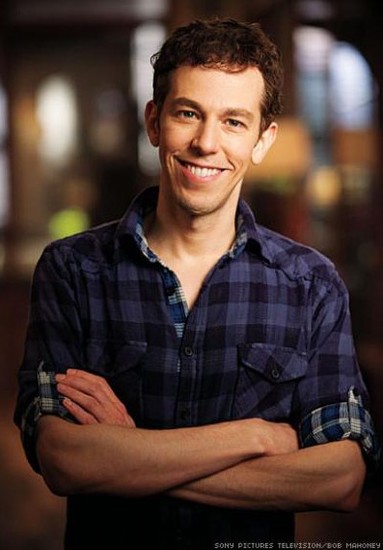 You might not think the premise of the Lifetime series Drop Dead Diva would work, but the show, now in its fifth season would prove you wrong. After shallow model Deb dies in a car wreck, her spirit enters the body of plump and plain Jane (Brooke Elliott), a young attorney with a few extra pounds on her frame. Throughout the course of the series we've watched Jane morph into a much nicer and well-rounded person and a better lawyer. In an episode airing on July 21, 2013, Jane comes to the aid of a closeted athlete accused of murder. I spoke to Josh Berman, the openly gay creator/writer/producer of Drop Dead Diva about the episode and the series.

GS: (Gregg Shapiro) I want to begin by saying congratulations on saving Drop Dead Diva from cancellation. How does it feel to have Drop Dead Diva entering its fifth season?

JB: (Josh Berman) It feels absolutely fantastic! I love writing the show. I love these characters and I feel like the show got a second chance at life, kind of like (the character of) Deb got a second chance when she came back as Jane. The spirit on the set is so fantastic. Everyone feels, collectively, that we got a second chance and we all want to make the best show possible and I think we are. The only negative is that some people still think we're canceled. I'm glad there are writers out there like you to spread the word. If people don't know we're back and they missed the first couple of episodes, Lifetime has made them available on demand, as well as on iTunes. Of course, we have new episodes Sunday nights.

GS: The "Secret Lives" episode of Drop Dead Diva, airing in July, focuses on the timely hot button issue of professional athletes coming out. Where do you stand on the subject?

JB: As a gay man, I think it's important for everyone to come out when they're ready to come out. I think it's sad that we still even have to talk about coming out. But that is a reality for all of us when we grow up in a straight world. There is a line in the script where the character of Scott says it shouldn't matter to anyone that he's gay, he shouldn't have to tell people he's gay, he should be able to live his life the way he wants to live it. I very much believe that. It's no one's business what you are. I think it's a shame that we have to hide anything. But at the end of the day, nobody should be able to tell someone to come out; it's got to be a personal decision. In this case, he has to out himself in order to save himself from a murder accusation. So he doesn't have a choice. Without giving away the ending, I think this episode gets to have its cake and eat it, too. Hopefully it will be an inspiration for young men and women everywhere, whether they're athletes or not, to feel comfortable about coming out of the closet because they will likely have a more enriched life.

GS: There is a famous AA saying about how "we are only as sick as our secrets." With that in mind, "Secret Lives" addresses the kinds of things that people do to keep secrets, so would it be safe to say that you are a proponent of that school of thought?

JB: Well, I wish I'd come up with that quote [laughs]. It's a beautiful quote. The only word I might object to is the word sick. I would say we're only as lonely as our secrets. I don't necessarily think the secrets make us sick but they certainly alienate us from people who love us. That's probably where I would go with that. Gay and lesbian youth, before they come out, tend to view lonelier than anyone else because they can't be honest with the people that love them. That's just sad.

GS: The episode also deals with privacy, not only in the way that baseball player Scott is forced to give up his privacy to save his career, but also how it comes in to play in the world of sperm donors identities'. Do you feel like privacy is a thing of the past?

JB: You mean in the era of social media where everything we do is broadcast everywhere?

JB: Absolutely. We are training our children today to live their lives online without any privacy and not teaching them what that can lead to. In an era where everything we Tweet, everything we put on Facebook, doesn't just go to our friends and family, but can go to complete strangers and corporate America and beyond. It is scary and I think there will be a time down the road where I think educating children about what they put online and the consequences will become part of parenting. But it's all new now and it's the first generation where the parents don't necessarily understand what their children are doing.

GS: As they say, the Internet never forgets.

GS: Queer icons, such as series co-star Margaret Cho as Jane's secretary Teri, and Sandra Bernhard as a judge in the "Secret Lives" episode, are a regular occurrence on Drop Dead Diva. How important is it to you for those types of people to be a part of the show?

JB: I love having celebrity guest stars on the show. What so great about our show is that it's a feel-good show. It's the first show I've ever worked on where guest stars come to us to ask to be put on the show. Sandra approached us and asked if she could be in the episode. The irony is that I worked on some of the biggest shows in the history of TV. I spent six years on the first six seasons of the original CSI when we were bringing in 30 million viewers. I don't recall a time where people were calling us to be on that show. I love CSI, but it's a murder show; whereas Drop Dead Diva is an empowering show. (It's) a great way to start your week on a Sunday night. Actors come to us. It feels great and we love to use those actors on the show.

GS: What precipitated that change?

JB: I have a special place in my heart for Ben Feldman, who played Fred. I was often accused of writing him like I would write myself; kind of a neurotic Jew. He and I remain very close friends. There is a chance he will come back this season. He has an open invitation to do so. He came back twice last year. We love him, the cast loves him. He has since moved on. He was nominated for an Emmy last season for Mad Men and he continues on that show. Ben's character of Fred was never cast as a series regular. I always had a notion that we would revolve the guardian angels to be the perfect counterpoint to what Jane's going through in her life. But we loved Ben so much and he stayed on the show for three years. He could have stayed as long as he wanted. That being said, this season I really wanted a guardian angel that would be a male manifestation of the Deb. Kind of a vapid model type, so that Jane who's now evolved will get an angel who's not involved. I love writing for Justin Deeley who plays Paul so much. He's not only a gifted physical comedian but he's great-looking and he's really funny. He's also so nice in person and our cast is having a great time with him. And he's pretty much naked in every episode and I have no issues with that [laughs].

GS: Is there anyone in your life who you consider to be your guardian angel?

JB: My guardian angel was actually my grandmother whose name was Deb. The lead character is named after her. My grandmother was a 4 foot 11, chubby Holocaust survivor who instilled in me the belief that I could do anything that I wanted with my life. When I sat down to write a new show, I wanted to do a show with the spirit of this woman would since passed away. I knew I couldn't go to the networks to try and pitch them a show about my grandmother. Instead I put that spirit into Jane, played by Brooke Elliott. She's my guardian angel for the show and in my life.

GS: You have had success writing and producing for television with Drop Dead Diva and you mentioned CSI. Do you have aspirations to cross over into film?

JB: I do love the big screen. I love feature films. I don't like the pace. I don't like the idea that something I write now may not make it to the big screen and it could take four or five years. I love that am currently writing an episode of Drop Dead Diva that will be on the air in one month. I love that I can remain topical and I can be thought-provoking. To me, in television ideas remain fresher because from page to screen, the time is so short. I would certainly sacrifice the big bucks to be able to write shows that have more of an impact.

GS: Do you have any new TV projects in the works?

JB: Yes, I have a deal let Sony. I will be pitching out ideas to networks in the next month or two. But I haven't landed on the new show yet.