Just to meet the fans and seeing people love your work is just an amazing feeling. 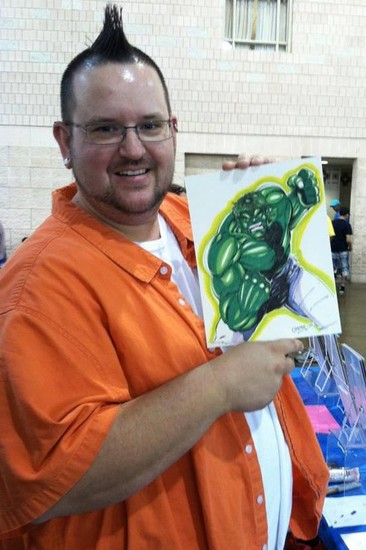 Gurnee native Jeff Balke, an Elkhorn, Wisconsin-based comic colorist (the artist who adds color to black and white comic images) has something to celebrate. He recently completed his 100th project, "Grimm Universe #3," from Zenescope Entertainment. In addition to being affiliated with Zenescope, creators of books such as "Charmed," "Grimm Fairy Tales" and "Tales from Neverland," Balke also works with legendary filmmaker John Carpenter ("Halloween" and others), who puts out books with his wife, Sandy's Stormking Productions. A two-time nominee for the Eagle Awards (comic industry's oldest and most prestigious award),

Balke has also been nominated twice for the Shel Dor Awards for Colorist of the Year, receiving the award in 2011. (Balke will be signing at Wizard World Chicago at the Stephens Convention Center in Rosemont, Aug. 8-11.)

GS: (Gregg Shapiro) Jeff, were you a comic book reader growing up?

JB: (Jeff Balke) I actually didn't start collecting until I was in sixth grade, and I only collected them for the artwork. I never read them and, for the most part, don't read them today. Well, I read them more now [laughs], but not consistently.

GS: How does one become a comic book colorist?

JB: How I started was on MySpace many years ago before Facebook became what it is today. I posted my own artwork (that) I drew up on my page, and received some pretty good feedback from people. But I kept getting the question, "do you have anything colored?" At that time, around 2005.I didn't. Then, with colored pencil, I colored up one of the Spider-man pics I drew. When I posted that, my page blew up with very positive comments. After a few months of posting colored pics, I learned Photoshop and started coloring digitally. That was the beginning of my awesome career [laughs]! In 2007, I got hired by After Hours Press, a smaller comic book company, to do work on a Foxwood Falcons comic book, cover to cover. This was my first published comic I've ever colored.

GS: What comic book artists have inspired and influenced you?

JB: Todd McFarlane, Marc Silvestri and Stephen Platt are my biggest comic artist influences. Now, for comic book colorists, Peter Steigerwald, Neil Ruffino and Steven Firchow are my top three. I don't have any schooling about coloring or Photoshop, so I had to teach myself. And I learned by picking up any book Peter (Steigerwald) colored and taught myself from comics.

GS: Is there a comic book character or series that would be a dream come true for you to color?

GS: What does it mean to you to see your name on the cover of a comic book?

JB: Awesomeness [laughs]! I've always wanted to do something in this industry, and it's just a huge honor for me to see my name on the book or in the credits.

GS: You recently reached your 100 book milestone as a colorist. How did you celebrate?

JB: I started working on my 101st [laughs]. But, seriously, we're getting things together to celebrate at Sidetrack in Chicago.

GS: Do you attend any of the comic book conventions such as Comic-Con?

JB: I do about 27 shows a year and I'll be going back to Comic Con in San Diego this year. I love shows. Just to meet the fans and seeing people love your work is just an amazing feeling.

GS: What is it like to be an out gay man in the comic book world?

JB: Just like being straight, I guess [laughs]. I never really had any issues. There are, here and there, the people who are standoffish, but they are few and far between.

GS: Have you come across other LGBT people in your comic book travels - artists, writers and/or fans?

JB: I've come across a lot of fans and a couple other creators. I had a pretty awesome comment from someone this past show in Seattle. He said, "I look up to you and (filmmaker) Kevin Smith because you guys are great role models for the community." Of course, Kevin is not gay. He is just an awesome guy and a lot of bears like him [laughs]!

GS: Do you watch Big Bang Theory and do you think the characters are a fair representation of comic book culture?

JB: I just started watching and have only seen a couple of shows. I hardly watch TV. I'm either working or out on the road doing a show.

But from what I saw, I like the show and it seems to do a pretty good job.

GS: What is next for you, Jeff?

JB: Next up, I'm hoping to get a job full time with a company this year, kicking butt and celebrating hundreds of more books in the future.