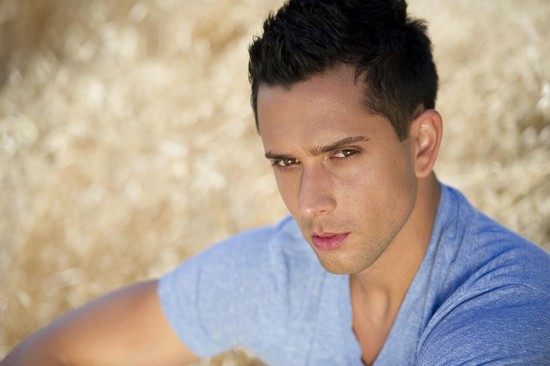 There's a new "Dancing Queen" in town—at the Riverfront Theater.

This show goes back in time, with some of ABBA's greatest hits as well as the music of Saturday Night Fever and ‘70s disco queens. Let the polyester rain down as headliner and American Idol alumnus David Hernandez leads the cast that will have the audience dancing in the aisles.

Hernandez, a Mexican-American born in Phoenix, pulled up a chair down by the river after his first day of rehearsal to help figure out the man behind the music.

DH: (David Hernandez) I started when I was about six.

WCT: What were you singing at 6 years old?

DH: Well, I auditioned with Whitney Houston's "I Will Always Love You" for the musical that I was doing.

DH: I think so, for being 6. My grandpa worked as a janitor in the mall of where this bootleg theater company was; now, it's a big theater company called Valley Youth Theater, and it was its second production. The first one was Annie.

My grandfather took me down to audition and I got the part. I played the little kid named Miles. It was called The Canterville Ghost.

WCT: That is an Oscar Wilde classic. Where did you grow up?

DH: Phoenix, Ariz. I born there but lived in Glendale, Mesa and Scottsdale. Everywhere in Arizona—I even lived in Tucson in college.

WCT: Did you study music there?

DH: No; actually I studied broadcast journalism. I always wanted to be the guy that walks the celebrities down the red carpet, telling them what they can't say. My emphasis was public relations.

Three and half years into college I decided I wanted to try singing again. I started singing hooks for rappers then the record label Universal got wind of me. I auditioned for them and they signed me. I was signed for two and half years. We did a whole record and released a single. It wasn't the direction that we both wanted to go. Literally three months after we parted ways, I auditioned for Idol and I made it.

WCT: So with American Idol you are allowed some musical experience?

DH: I don't know. Three or four people on my season had been signed and one of them had already been on a reality show before that. There are a lot of preconceived ideas about Idol like, "Do they own you for five years later?" The answer to most of them are "No, they are wrong." I was out of contract three months after my season ended. Basically, I have been a free agent ever since.

WCT: Did you enjoy it?

DH: It was great—one of the best experiences of my life. It was crazy boot camp. I was 24 and it was weird with a lot of rushing around. We never had time to rest our voices. It was PR and after-parties; then you learn your songs for tomorrow. The day after you finish your song you are learning the group medleys.

WCT: I thought you would have more down time.

DH: No, there actually is not. It is fun but [during] the down time you want to sleep. The rest of the time you are getting free iPods and meeting cool celebrities. I jammed out with Bryan Adams on acoustic guitar. Bryan Adams said I had a gorgeous voice; that is pretty humbling. When you are sitting before a singer that has sold millions of records that is a lot of pressure.

WCT: You made it to the top 12 [of American Idol] on the year of the Davids.

DH: I was the year of David Cook and David Archuleta.

WCT: Tell our readers about this new Dancing Queen show.

DH: It has a lot of ABBA because that is what it is based around. There is a ‘70s medley. There is a soul section to it. I have never done the show but two of the cast members in the group—the females—have done it and they say it is lot of fun. It is extravagant costumes and high energy.

WCT: Is there a plot to the show?

DH: I think there is just singing, dancing and lots of lights. There are about 20 dancers and four singers in the show. It is a big cast. This is my first time coming into it so I am not sure what to expect. I just know my agent would guide me in the wrong way.

Spirits Productions are so nice. They are like family and I just met them about four days ago. My birthday was on Thursday and they took me out.

WCT: Happy birthday! I heard there is a salute to Donna Summer. Talking about age—she died at only 63 years old.

DH: I just got goosebumps thinking about it because I performed with her on my season finale. I got to meet her during rehearsal and she had her sunglasses on.

WCT: Same thing when I met her. She kept those sunglasses on!

DH: Really? I wondered if she would take them off.

WCT: I think it was in her contract somewhere…

DH: She was really sweet but had to rush off. After she passed, I posted the picture and stated she was one of the greatest disco divas of our time. She paved the way for a lot of future singers.

WCT: Do you have a favorite song in the show?

DH: I saw the set list but we just started rehearsing today.

WCT: So this is brand-new.

DH: They have been doing it Vegas for a month or two and then they did it in Niagara Falls and Myrtle Beach, but this is all very new to me.

WCT: The pressure is on!

DH: There are a lot of lyrics to learn but its fun. I am used to doing stuff like this. I have been on a tour for the last three years. I did a Motown show so I am used to getting the music then go.

WCT: You were in a movie not too long ago.

DH: It was an indie film called Synthetic Truth. I am currently working on a television pilot. I love acting. Like I said, I started musical theater when I was 6 so acting and singing happened at the same time. I don't really have a favorite. I love singing but also being on screen, too.

WCT: Do you work out a lot?

DH: I do. I haven't worked out in a couple of days and I feel very lazy.

WCT: I have seen pictures of six-packs.

DH: I don't know how that is going because my birthday just ended and I have been splurging. Some of the costumes highlight certain areas so it was tight-fitting!

WCT: Have you tried any Chicago food?

DH: I had a Chicago hot dog. Also, I tried Joe's [Seafood Prime Steak & Stone Crab] and had the best steak and lobster ever. This is one of the most beautiful cities ever, right under New York and Barcelona.

WCT: Let's talk about the album.

DH: The album has been in the works for about three years now. It is called I Am Who I Am. The lead song is my life story. My mom was a single mom who raised me by herself. My dad came into the pictures years later. She was struggling. I think it speaks to any community really because we all go through a lot of discrimination. I personally have been through the ringer with a lot of things in my past. There have been a lot of questions but why are we judging each other so much? Why can't we just support each other?

That encompasses the record. I wrote all of the songs and then covered "Halo" by Beyonce and "The Climb" by Miley Cyrus. It has been a long time in the works.

The new stuff I have been working on is with [writer/producer] Printz Board from The Black Eyed Peas. That is due later this year. We just finished the third song for that record.

WCT: Is it more dance-oriented?

DH: It is like Cee Lo Green meets David Bowie meets David Hernandez. I love Cee Lo Green. He is funky and quirky. There are certain elements that make this new music diverse. Printz has been the perfect producer to work with.

WCT: Well, I will see you on opening night under the tent.

DH: You have to see some of these outfits. It is totally ABBA! I just tried on pants with platform heels. I am just throwing it out there…

WCT: Go practice walking on them on that bench over there.

DH: I might fall over the edge. This will make performing in that Elton John show a breeze one day!

Dance your way over to 650 W. Chicago Ave. for this fun show opening on June 14 and running through June 24. Visit www.RiverFrontTheater.com for tickets and show times.

Don't miss the Boys Night Out on Friday June 15, brought to you by Windy City Media Group. The cost ($40) includes admission to the show, drink ticket and drink specials at Downtown Lounge. Use the password "Travolta" at time of purchase.