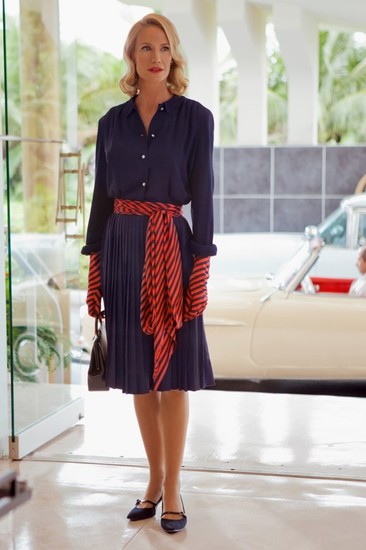 Actress Kelly Lynch began her career as a model for Elite, then went on to appear in such films as Drugstore Cowboy, Cocktail and Road House—which became huge hits in the ‘80s. She continued playing original and unforgettable characters in Charlie's Angels and The L Word.

WCT: (Windy City Times) Hey, Kelly. So you are calling from LA?

WCT: I know you are originally from Minnesota.

KL: Exactly. I actually spent a winter in your fair city doing Curly Sue, which was John Hughes' last film [he directed]. I had a weird occurrence on Lake Shore Drive. We hit sheet ice with my daughter, who is now 26 years old. I was afraid there would be a 300-car pile up because we were the first ones hitting the guardrail so I got my daughter out of the car and carried her on my back because we couldn't stand on the wind and the ice. I crawled across and got to the side before more accidents could happen.

WCT: What made you want to do Magic City?

KL: First of all, I slept with the show runner various times to get the part. He's my husband. I have full disclosure here. It wasn't just once, we had to do it a lot. So there is that. I am not too proud to admit it. [Both laugh.]

Mitch was talking about this whole idea as a movie or TV show since we have been together, which has been 23 years. I have been every single character, including Ben Diamond (the mobster) at one time or another!

He really started thinking of this character of Meg Bannock; the older I get, the more I am just in love with [her]. These heiresses breathed different air than the rest of us do. This woman had to say goodbye to husband number two and had no children but all of this wealth, then had to compete in a man's world with power and money. She had real estate and really groovy cars and clothes.

WCT: Which do you like more: the hair or the clothes?

KL: I think being a fashionista myself, I don't mind tooting my own horn, I am two-time International Best Dressed winner—actually as a couple, my husband the dashing Mitch Glazer. So clothes would be my first thing.

The hairdos I have taken a clue from Grace Kelly, who wore a simple blonde bob. Maybe in season two Meg Bannock goes wild and ends up in some sort of jazz club and let's her hair do new things.

WCT: Why do you think audiences enjoy period shows like this one and Mad Men?

KL: I have to say looking back on our history from the first turn of the century to this one it was a time when America was America with a flexing muscle, big chrome cars, the space program seconds away, the Kennedy era dying on us, the middle class thriving—it was a golden era.

People in the world still think of this time in a positive way. We explore in our show the underbelly of that. It was a crime riddled and very white power structure. In Miami during this time period 2 percent was Latin; today, it is 60 percent. Women were barely in the job force. African-American people were not allowed the right to vote. My husband used the "colored" drinking fountain as a child because he thought a rainbow would come out!

WCT: You played an interesting role on Showtime's The L Word.

KL: That was one of my favorite characters of my life. I had just filmed a big role and my agent asked me what I wanted to do. My rule is to never play the same person twice. I have always felt I am a character actor trapped in a leading lady's body. I wanted to play something romantic.

They mailed me over some sides for a character named Ivan. I thought it was a funny name for a girl. I read it and they included a note that Pam Grier was Kit, Ivan's love interest, and Ivan is a drag king that is sexy and handsome. I had to fly to Vancouver the next day and shoot it. I had to do a drag show and I had never seen drag kings before. My dad owned a drag bar in Minneapolis called The Copper Squirrel when I was a kid.

WCT: I didn't know that.

KL: Yeah, he is in the bar-and-restaurant business; he is retired but I grew up loving drag queens. We have a very thriving gay community in Minneapolis. That is something I am really proud of.

This was a completely different world for me so I went online and picked out a song, "I'm Your Man," and I choreographed it that night in my hotel room. It was the most scary, exciting, fun thing I have ever done. I had to beg the hair and makeup people not to make me look like Clint Howard, Ron Howard's funny-looking brother. In my mind, Ivan was the most handsome guy on the planet. I wanted that androgynous quality that would get everyone intrigued, whether they were straight, gay or lesbian.

WCT: You have had such a long sustainable career, working with Tom Cruise, Matt Dillon and Denzel Washington.

KL: My leading men have been amazing, without a doubt; then to have had a chance to play a leading man—well there you go! [Laughs] I challenge any other actress to say that…