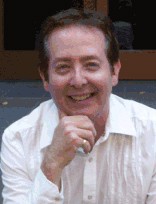 Ever wonder where legendary Hollywood celebs go when their stardom is so faded even TMZ wouldn’t care if they’re alive? The lucky ones retire quietly in respected wealth and minimal therapy. But the very lucky ones become the irrepressible Polly Pepper. In the newly-released Set Sail for Murder (Kensington Books), author R.T. Jordan brings back his lovable, Champagne-filled, Hollywood-star-turned-sleuth, Polly Pepper, for a fourth hilarious installment in his series of charming Polly Pepper mystery novels. Jordan, also a senior publicist for Walt Disney Studios, sat down recently with ChicagoPride.com to share more insight into his beloved fictional character.

RT: You caught me. I’m a liar. I admit it. Until now, I’ve always denied that Polly Pepper was anything more than a fabrication of my own awesome and brilliant imagination. I’ve almost convinced myself, and other interviewers, of this falsehood.

Finally, to get this off my chest, yes, Polly Pepper is actually a conflation of a number of television and theatrical icons I love.

The reviewers and my readers are right, Polly is Carol B. and Mary Tyler Moore and Auntie Mame and Stefanie Powers and Lucy and Michele Lee and Lily Tomlin and Carol Channing and the list goes on.

When I first began to work on this mystery series I had a sort of epiphany. Since I live and work in Hollywood and have met so many great stars, I started thinking, “What if ...

What if everybody’s favorite variety hostess from yesteryear—Carol Burnett, or Cher or Bette or Julie Andrews—found themselves aged out and no longer wanted for anything more than being a familiar body on the dais for another Actors and Others For Animals annual benefit luncheon.

Sure, they’re still legends and always will be.

But with the Lady Gagas of the planet now vying for media attention, the old guard has to find other ways of being noticed by TMZ. What might any of these older talented ladies do?

Of course they want to be working at something. And they need to be adored by fans. What better way to continue being in the headlines than by being in the midst of a murder investigation—which, in Hollywood, is not a novelty!

Of course, none of these icons would intentionally set out to become sleuths.

But they’ve all been around Tinseltown long enough to know how to survive the sharks and they know where more than a few bodies are already buried. And, they’re savvy enough to know how to use their celebrity to wrap most people around their little fingers. People know and love them and will spill their guts about any bit of evidence they might have.

So, Polly was born from me hanging out with very cool celebrities and feeling sort of sorry for them not getting the attention they used to. It’s a classic case of projecting a “what if” scenario.

PJ: Did you watch a lot of television growing up?

RT: I’ve gone through a phase over past decade where I don’t watch much television, basically because I’m too busy writing—although I never missed an episode of “Frasier,” and now “The Middle.”

But as a kid I was hooked on “Laugh-In,” “Green Acres,” “The Carol Burnett Show,” and “Saturday Night Live.” There’s nothing I enjoy more than laughing. Highbrow to low brow, Roadrunner cartoons to Woody Allen movies or Lily Tomlin’s recordings or Mad magazine, I have a very sensitive funny bone. I still embarrass myself laughing out loud in public if I’m reading David Sedaris, Joe Keenan, or Laura Levine. But as a television viewer during my childhood I also loved “The Waltons.”

I think my first serious crush was on John Boy Walton. I wanted to be John Boy. First, he was adorable; but he was also a writer, which is what I’d set my sights on becoming. So I guess the shows that I watched helped to shape the guy I am today.

I learned a lot by paying attention to sitcoms and variety shows.

PJ: You have written that Polly Pepper is best known for her legendary TV variety show, but she also topped the pop music charts and received a gold record for the song “For New Kate.” Would you mind sharing some of the lyrics or explain the meaning of this hit song?

RT: That’s a very funny question. Funny to me because many readers have asked about Polly’s recording career, especially her one hit, “For New Kate.” Some people get the joke right way.

Others have caught on in some of the later Polly books where the song is mentioned. Try this.

Run the words together quickly. Fornewkate. What do you hear?

PJ: [Laughs] I can’t believe I didn’t catch that.

RT: This is what happened to Polly, and I don’t know if I ever explained it in any of my books. When Polly was already a star on television she decided that she wanted to record an album. She listened to a lot of Broadway and popular songs to cover.

Then one day, a writer on her show, as a prank, brought her a demo of a song that he written. It was supposed to be a joke. He thought she’d get a kick out of it. He explained that it was an anthem, like “I Will Survive,” about a woman who finally discovered that her destiny is her own. Well, Polly loved the song but never got the joke. Against all odds, it became a huge hit. So the joke is really on Polly.

PJ: If any of your mysteries were made into film, which actors would you want to play Polly, her gay son, Tim, and her faithful sidekick, Placenta?

RT: I’ve actually had a few nibbles from Hollywood. One seemed like a slam-dunk. But, as they say in this town, “Many are called, but few are chosen.” Still, I think Polly Pepper—perhaps call it “A Talent For Murder”—would make an outstanding television series, particularly for cable.

There are plenty of real-life Polly Peppers out here…stars of a certain age that audiences still fondly remember. How about Stefanie Powers? She still looks awesome! I would love to see Polly played by, um, Lily Tomlin. She’d be a knock out and she’s got a new fan base because of her work on “Damages.” How about Allison Janney? Love her! I saw a horrible film with John Travolta and Robin Williams called “Old Dogs,” but Rita Wilson, who had a very small role, was a revelation! She’d be great—as would Jane Fonda.

Actually, I hadn’t thought of Jane before now, but she’d be awesome!

I’ve met her. She IS Polly Pepper.

And it’s time she had a third act to her career, like Betty White. There are really a lot of ladies who could take this role and make a huge showbiz come back. I see the series as “Glee” meets “Monk” meets “The Real Housewives of Orange County” meets “Murder, She Wrote.” What about Charles Busch as Polly? Wow! Imagine what a hoot that would be! He could definitely do this role to great success!

PJ: I completely agree. I envision Charles Busch whenever I read a Polly Pepper mystery.

RT: As for Placenta, a lot of readers have said they see Wanda Sykes or Shelley Morrison [Rosario on Will & Grace].

But remember, I have never revealed Placenta’s ethnicity. There was a mistake made on her birth certificate. Instead of being named Placentia, after the city in Northern Orange County, someone goofed (perhaps on purpose) and named her after that afterbirth stuff.

So, Placenta could be Caucasian, Asian, African-American, or Hispanic. I don’t know. I leave this up to the reader to decide.

As for Tim…What I love most about Polly is that she regards her son as her greatest achievement. She loves him to pieces and actually would have been disappointed if he were not gay.

The role of Tim is probably not as easy to cast as one would imagine. I sometimes think he’s Ryan Reynolds, and other times I see him as Henry Cavill from “The Tudors.” Whoever eventually plays Tim will have to have the sex appeal of Taylor Kitsch with the maturity of Bradley Cooper.

Oh, and the eyes of Matt Bomer, the guy on “White Collar.”

PJ: What is the most challenging aspect of writing a mystery novel or a series of them?

RT: For me, the most challenging aspect of writing novels is staying awake!

Like most writers, I have another job. I work in an insane business called motion picture marketing. I’m in my office for 10-12 hours a day, then I race home to walk my dog, toss something frozen into the microwave, then settle in for a night of writing. The glamorous life of a writer!

I try to take a break to watch Jon Stewart or Rachel Maddow, then work a little longer and hit the sack by 1:00 a.m. I should have my head examined, or at least hold a lot of stock in Starbucks and Red Bull. The actual writing process is more like therapy for me. I can immerse myself in the world of my odd collection of characters and forget about the pressure of deadlines at Disney. Otherwise, I suppose the only other real challenge is trying to keep the stories both funny and fast-paced.

PJ: What’s the secret to keeping a main character likable while still keeping their edge?

RT: That’s another really great question. For me, it’s all about creating a character that I personally want to spend time with and get to know intimately. I figure if I like the character (and I love Polly, Tim, and Placenta), then my readers will like them too. It may sound strange to anyone who isn’t a writer, but I really feel that my characters have let me into their lives. They’re really not my characters at all. I sometimes feel that I’m being manipulated by them. And they trust me to reveal them to readers. So, if like Polly and Placenta, they have an edge, then it’s my job to let them keep that edge by not interfering with what they want to do or say.

PJ: Clearly, anyone who has read about Polly Pepper knows how much she likes Champagne. Which brand does she prefer?

RT: Polly is probably a borderline alcoholic. She has to have her minimum daily requirement of champagne, which is quite a lot. She’ll often start with mimosas at breakfast. And then there’s what she calls “Lush Hour,” which begins every day at 5:00 p.m. and ends when she falls into bed.

At her legendary home, Pepper Plantation, in Bel Air, California, she keeps her many wine coolers (there’s one beside her bed) stocked with Veuve Clicquot champagne. If she could afford Cristal, she’d indulge, but Veuve is a great second choice. However, Andre will never pass her lips!