There are many parallels between Aisha’s journey and my mother’s journey. 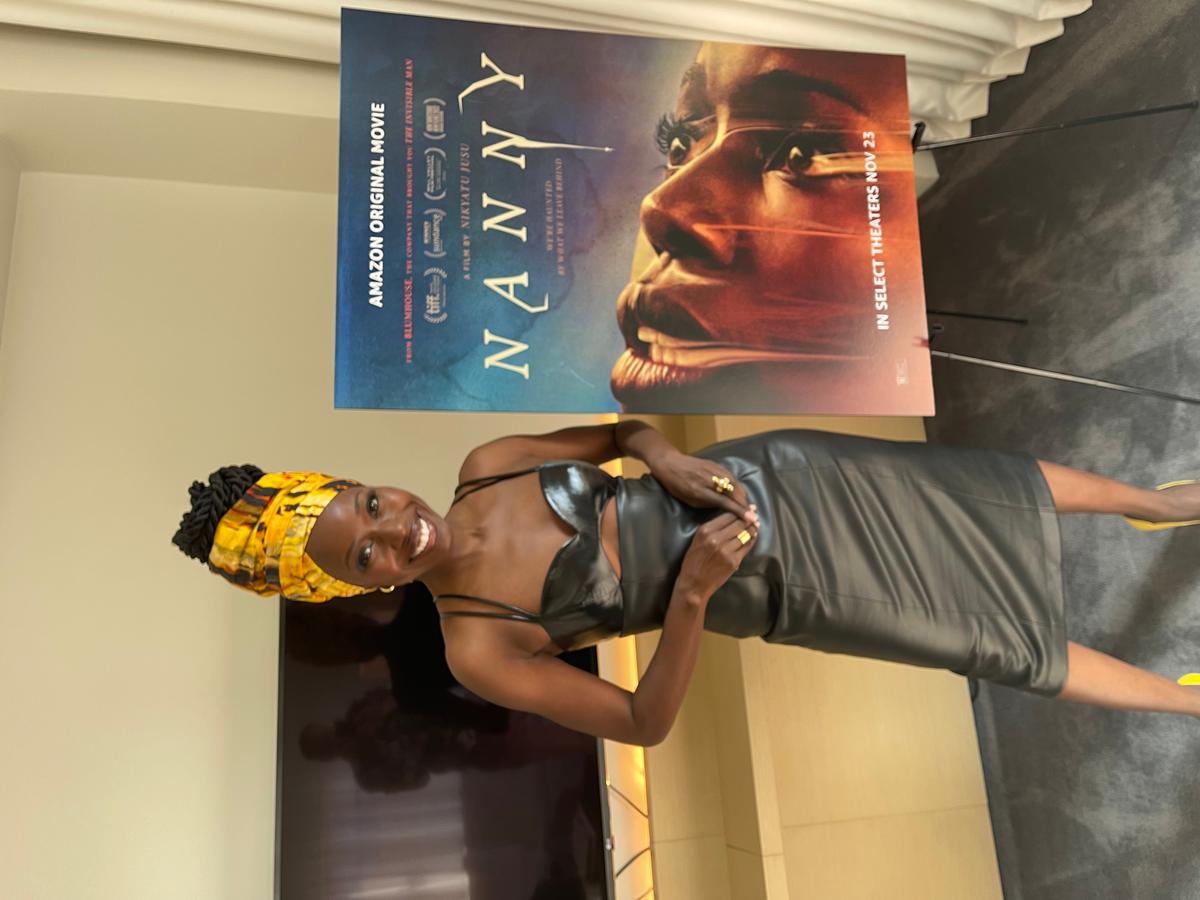 Anna Diop is an actress and model from Senegal, a country in West Africa.

On the small screen, she’s a regular on the DC Universe live-action series Titans as Starfire after being a series regular on The Messengers for The CW and 24: Legacy. On the big screen, she appeared in Us and now a new project called Nanny.

Directed by Nikyatu Jusu, Nanny is an unpredictable thriller about a nanny working for a family in New York with dreams of bringing her son to the United States after being left behind in her home country. Diop portrays Aisha as the lead role in a film that earned her the Spotlight Award at the Newport Beach Film Festival and won this year’s Grand Jury Prize at the Sundance Film Festival.

Diop popped into town to promote Nanny at the Chicago International Film Festival where she accepted the Rising Star Award.

JN: (Jerry Nunn) First off who is your stylist?

AD: (Anna Diop) Molly Dickson is my stylist and it is my first time working with her. All the looks I have had are created from one fitting. She is so talented and really good at what she does.

JN: Where was Nanny filmed?

AD: It was filmed in New York Amy and Adam’s scenes were in the West Village. Aisha’s stuff was in the hair salon and Malik’s home scenes were shot in Harlem and Brooklyn.

JN: How do you describe Nanny to people?

AD: I describe it as a psychological thriller with elements of horror. At its core, it is a drama about a mother who is a survivor with resilience.

JN: It is timely in a lot of ways…

JN: How did you connect with the character at first?

AD: My mother was an immigrant from Houston from Senegal. She left for the same reasons that Aisha left Senegal because there was a lack of opportunity. She wanted to make a better life for me and left her country. Aisha does the exact same thing. There are many parallels between Aisha’s journey and my mother’s journey.

JN: Has your mother seen Nanny?

AD: Yes and she was a nanny for 20 years. She worked with four different families over the course of time.

JN: So this is a deep connection with this character.

AD: When I read it I couldn’t believe it.

JN: How did you hear about it?

AD: Well, Nikyatu’s name was circling the industry because she had done a short film called Suicide by Sunlight. I saw it and was so taken by it. I was curious about who this person was.

A year later Nanny was greenlit and they were looking to cast Aisha.

I sat down over Zoom and read for her. She holds her cards so close that she didn’t tell me about the role for weeks. I had to do a series of chemistry reads without giving me that role.

Finally, she had mercy and told me I got it!

AD: She put me through it, yeah, but rightfully so.

JN: Talk about the snake scene.

AD: Well, Singua Walls was supposed to be in the scene with me but didn’t do it. My scene partner was supposed to be with me so I could be present at the moment. He would jump out of it every time the snake got into the bed and left me to survive it alone because he is terrified of snakes. I had to brave it on my own.

JN: I don’t blame him. I have a phobia of snakes.

AD: Luckily I am not terrified of snakes, so I got through it. It was alright but it was creepy to have something slithering around my legs, but we make due!

JN: You were in the trenches with snakes! How do you feel about receiving this Rising Star Award from the Chicago International Film Festival?

AD: It is all so flattering especially playing this role because again it is similar to my mother who has never been amplified or celebrated in life. She did a thankless job working as a nanny and made incredible sacrifices. She has always been a quiet woman.

To receive awards based on a performance where I was pulling so much from her was extraordinary. I am really proud of her.

JN: Well, she must be very proud of you and I am so happy about your accolades.

JN: Let’s talk about Titans because I am a longtime comic fan.

JN: Is there a stunt that stands out on the set for Starfire?

JN: Oh, she hasn’t flown so far and her hair was always this long thing trailing behind her.

AD: Yes and she flies a handful of times this season. Her powers are evolving in a way that she is still discovering so we see that happen a lot. Her powers are changing in color and intensity force. She is just trying to figure out how to control them and use them effectively.

JN: Were you a comic fan before landing the role?

AD: I wasn’t and discovered her after. This character is very well-loved and adored. I understand why because she is so bubbly and unique in her playfulness. She is playful, but also destructive and violent. This is only when necessary. She has a great moral compass.

JN: Kory is very layered compared to the comics. It was a different time when she debuted in comic books.

AD: Yes it was a different time and we are updating everything now.

JN: You could do appearances at comic conventions now.

AD: I haven’t done any yet but I have grown to love the genre. People have deep connections to it. Why are you a comic book fan?

JN: I learned to read through comics while I sat on my grandmother’s lap. Teen Titans was one of those comic books.

So, do you have a gay best friend?

AD: I have so many. One of the characters this season is a huge part of the story and is a gorgeous gay man. I just love him and became one of my best friends this season. You will see it when you watch it. I don’t want to spoil anything.

I missed Minka Kelly and Conor Leslie this season. Those were my girls!

JN: Where is Titans filmed?

JN: Nanny will be released on November 23, so what are your plans for Thanksgiving?

AD: I will be filming a new project which has not been announced yet, but I am very excited about it.

For Christmas, my mother wants to go to Brazil so I will do that with her, my dad and my brother. I have to plan it out. I read a meme where the oldest child is the project manager for the family. That could not be more true in my case. I plan all the vacations and family trips.

JN: Have a great holiday season and congratulations on Nanny.

Nanny sits in theaters for a limited time on November 23 before streaming on Prime Video starting on December 16, 2022.