Through narrow and shining doors: an interview with Paul Lisicky

I used to say I leap genres from book to book so I won’t repeat myself, repeat the same atmosphere, voice, imagery. But this book was different. 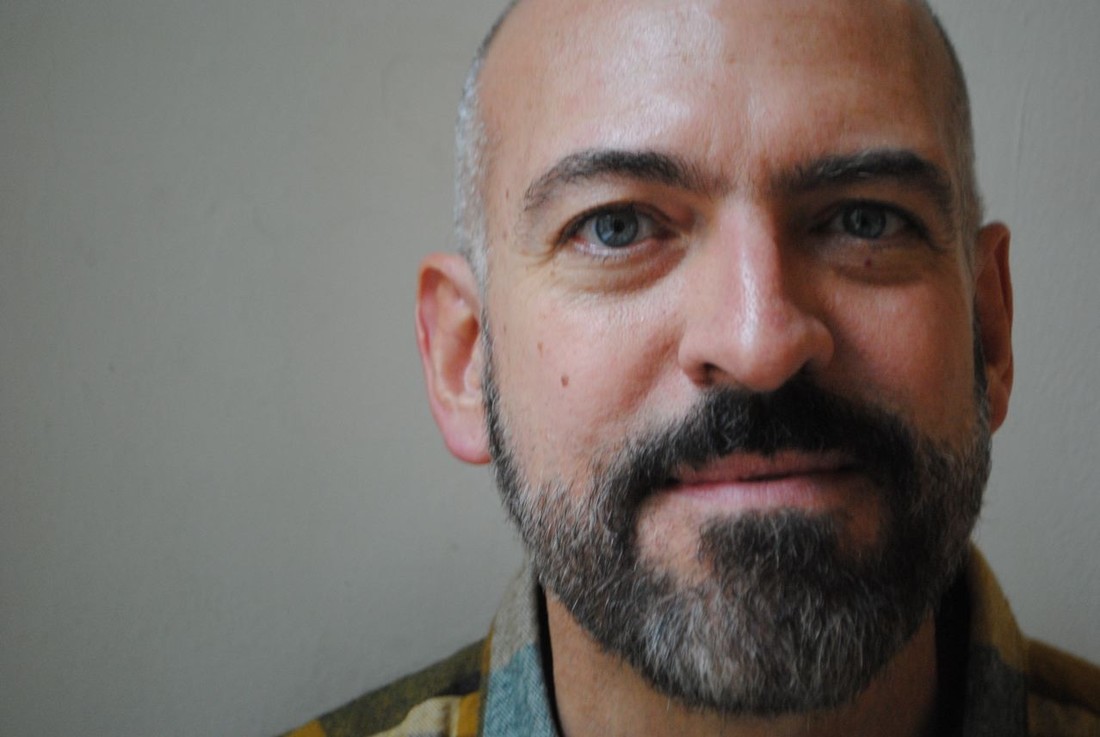 The Narrow Door (Graywolf, 2016), Paul Lisicky’s new memoir, is an intimate and emotionally charged portrait of loss. Writing about the death of friend and writer Denise Gess and the end of his relationship with his partner the writer Mark Doty, Lisicky opens a personal door for readers to pass through and share in his life-altering experiences. Moving back and forth in time, while incorporating his commentary on singer/songwriter Joni Mitchell, Lisicky also makes it clear that he is a survivor; one who will live to love and write about life again. I spoke with Lisicky shortly before the publication of The Narrow Door. [Lisicky reads from The Narrow Door on March 19 at Seminary Co-Op Bookstore in Hyde Park.]

Gregg Shapiro: Paul, as writer of both fiction and memoir, please say something about how you go about deciding whether to tell a story such this in the memoir format versus fiction.

Paul Lisicky: I used to say I leap genres from book to book so I won’t repeat myself, repeat the same atmosphere, voice, imagery. But this book was different. It insisted on being nonfiction. In part I wanted to make a grave marker for my friend. In part I needed to understand our friendship—why did the loss of her cut so deep? That was its urgency. I think the culture at large undervalues long friendships—often those relationships are more intimate than our romantic and familial ties. So at its root the book was driven by inquiry—a need to find out—rather than pure dramatization, which requires a kind of disappearance into invented characters. I think of the former as the work of nonfiction.

GS: You are very specific about dates/years throughout the book. Were you keeping a journal or diary? Or do you just have a fantastic memory?

PL: No, never kept a journal. The closest I came to diary writing was a blog, but that’s sort of different, as it’s public: mediated, curated, not really the raw and unfiltered, though it might compose itself as such. Fantastic memory [laughs]? I’m okay with remembering dates, but there’s so much I don’t remember. For instance, my twenties. This was the first time I’d looked into that part of my life—and doesn’t the book refer to those years as a “frozen hole?” I was trying to make up my life, which just about used up every nerve and synapse. It used up my ability to remember. So I thought it would be interesting to focus on a time I didn’t have full access to—and possibly think about why and why not.

GS: Natural disasters – such as volcano eruptions, earthquakes, tsunamis and hurricanes – and man-made disasters – such as the Deepwater Horizon event are interwoven with personal disasters – including the death of your friend Denise, the decline of the health of your parents, the verbal attack and threat of violence in San Francisco, and the end of your relationship with your partner Mark figure prominently in the book. Please say something about disaster as device.

PL: Disaster isn’t exactly willed into the book. On a certain level we all know that disasters are happening all the time, not just overseas, but in our neighborhoods, on our blocks.  I guess I was in a state of mind when I became more attuned to them. Grief can have that kind of power. And I hope those passages don’t simply function as conduits of feeling. I want them to suggest a connection between the world outside and the world of our own relationships. How do we have solid relationships at a time when the planet is increasingly precarious, when ongoingness isn’t exactly a given?

GS: You employ a system for the use of names in the book, either utilizing letters (such as M for Mark), code names (“Famous Writer” = John Irving), “Braunwyn” or “the Roberts.” Can you please say something about that?

PL: Well, in part those are there to protect the privacy of those people—and I was using my intuition around those matters. That device also signals to let the reader know that the book is orchestrated, a made thing. There is a director behind the camera and it isn’t simply “reality.”

PL: I don’t think I ever sit around the table at a dinner party without wondering afterward if I’d said too much. TMI is probably a more accurate way to describe me—in certain circumstances. It’s weird. I’m certainly open about my identity and sexuality and values—but moving beyond hiddenness? That’s hard to answer. I try not to keep secrets. But have I always been the best communicator in my own relationships? Conflict will always be hard for me. Openness is life-long work, as I guess it is for most people. It’s not like you step through the shining door and you’re open and free.

GS: During the break-up process, you are given permission to write about what has occurred, to which you respond, “but I don't want this in my book!” Nevertheless, it is in the book.

PL: Mostly “the book” in that context refers to life story. I couldn’t accommodate one more change, losing one more person I cared so deeply about. I’d already had my hands full, but life had another plan for me.

GS: The loss of Denise in 2009 came at a time when losses from AIDS were subsiding somewhat in the lives of gay men, who had become so accustomed to losing friends. In fact, in the “The Freedom of Failure” chapter, you write that M says “he is used to illness…he does well…in the company of those who are sick.” Do you think that the losses you had suffered before Denise’s passing made any difference in the way you dealt with her death?

PL: I’m sure I could only experience Denise’s death the way I felt the deaths of all those men who had died too soon. Did I unintentionally write an AIDS narrative, but with different variables guiding the story? I’ve wondered about that in retrospect. Denise was a great reader of those narratives. One of her favorite books was (Mark Doty’s) Heaven’s Coast—she taught it to her students all the time. Did she die hoping she’d be at the center of such a book? That’s a question I’ve been obsessed with lately, and I wish I had more to say on it.

GS: Anyone who knows you or is familiar with your work knows about how important Joni Mitchell is to you. How has the news of her stroke and her recovery affected you?

PL: She’s always had pretty serious health problems and until recent years managed to keep them out of the public eye. She’s incredibly strong, so brave. Maybe I’ve let go of my desire for her to come out with a later-in-life Hejira. She’d already done enough, and I’d just rather her be in a place where she’s herself again.

GS: In the opening paragraph of the “High Maintenance” section, you write about the way people “talk about her career as if her best songs…were written and performed in the 1970s,” which made me think of the way that artists who cover Joni mainly stick to her early work and rarely venture past Court and Spark. Why do you think that is?

PL: I think the great music from the mid ‘70s—The Hissing of Summer Lawns through Don Juan’s Reckless Daughter—is so personal, from the lyrics through the harmonic patterns, that it’s hard to imagine anyone else writing it, performing it. It’s all incredibly subtle, nuanced, shaded. There are no broad strokes, nothing instantly hummable. Melodies vary from verse to verse. I have heard brilliant covers from that work but it’s much harder to play, much more demanding for the audience than, say, anything from Ladies of the Canyon.

GS: Do you know if Joni has ever read any of your books or anything you've ever written about her?

PL: She might have read a part of my piece “The Wolf That Lives in Lindsay,” which takes its title from her beautiful, disturbing song from Mingus. I don’t know that for a fact, but it’s in an anthology that she apparently approved of. I have a signed copy from her.

GS: The late Jaco Pastorius was a significant member of Joni’s band in the late 1970s. Have you been to Jaco Pastorius Park when you've been to South Florida?

PL: I haven’t actually been inside the park, but I’ve pulled off the street to take a picture of the sign. It’s on Instagram somewhere.

GS: You write about writers’ workshops, which have been creeping into pop culture lately and can be seen in movies such as The End of The Tour -- the movie about David Foster Wallace, whom you also mention in your book – as well as in Wonder Boys and Storytelling, in addition to on TV in Girls. Do you think they have been done justice in these portrayals?

PL: I’ve seen a few of those scenes from Girls and, well— I instantly knew why I summarized instead of dramatized those Iowa classes. The tension of a writing workshop is pretty much beneath the surface. So much is at stake for the writer, on multiple levels. So many possibilities of exposure, screwing up. I’m not just talking about content but expression, word choice, all of it. So I think writers around the table often take great pains to be poised and sane and articulate. It’s always a hair’s breath away from chaos. And people most often come to that situation with great professionalism and seriousness—not that we don’t pretend that it’s effortless and make jokes. So the drama of the situation is really submerged and pretty impossible to externalize, which is why Hannah’s overt reactions on Girls end up looking a little fake. No one who’s being workshopped ever wants to look like she’s been wounded.

GS: Do you have a favorite movie about writers?

PL: The only one that comes to mind is Carrington, which is practically old now—it came out in 1995. It’s about the friendship between the painter Dora Carrington and Lytton Strachey, who was a founding member of Bloomsbury, in Virginia Woolf’s circle. I haven’t seen it since it came out but it seemed smart and mysteriously engrossing to me at that the time.

GS: Lastly, Paul, have you started thinking about or working on your next book project?

PL: I've been working on two books simultaneously. One is a memoir set in my first years in Provincetown, in the early 90s, and the other is a collection of parables and fables, a bit of a sequel to my Unbuilt Projects.