"You know Annie used to be a dream role of mine. Then I transitioned so now I get to play her boyfriend!" 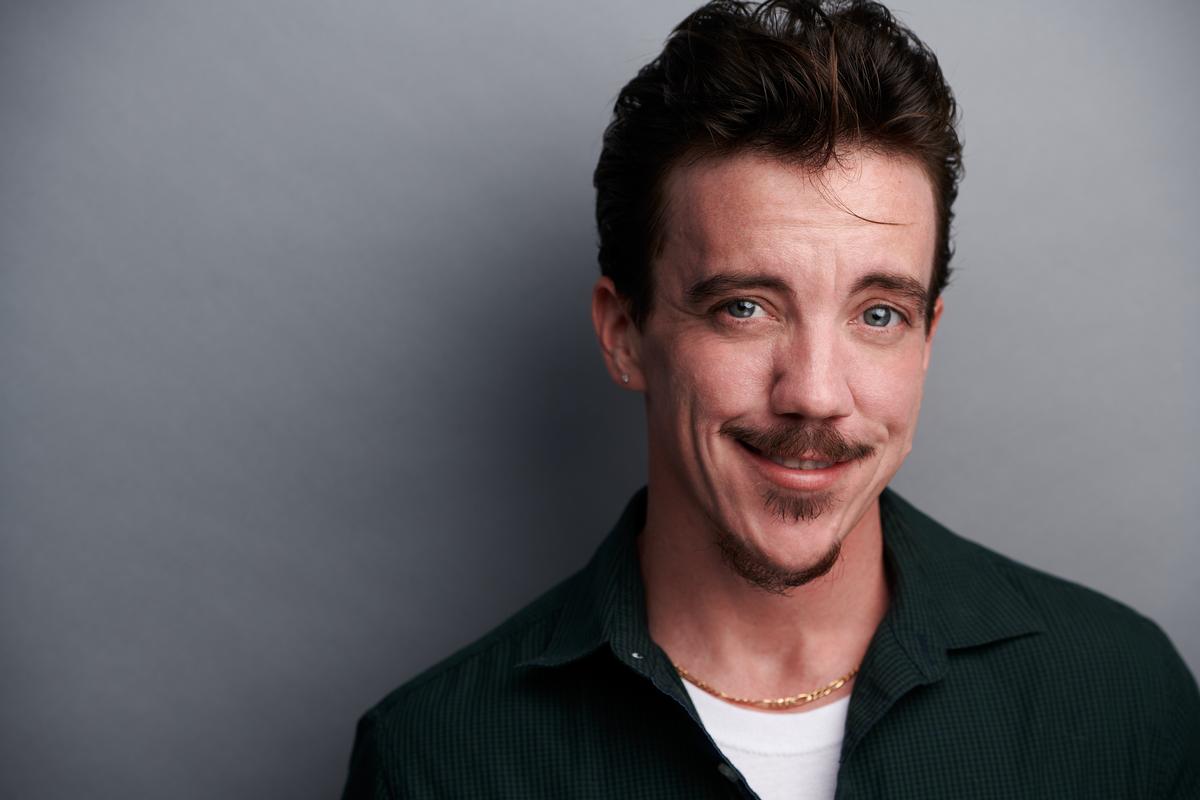 Directed by Daniel Fish, this is OKLAHOMA! as you’ve never seen or heard it before - reimagined for the 21st Century, and now the Tony Award winner for Best Revival of a Musical. Upending the sunny romance of a farmer and a cowpoke, this production is funny and sexy, provocative and probing.

We chatted with the hilarious and witty Hennessy Winkler (Will Parker), who's recent credits include DNA at La Jolla Playhouse and Nicolas in the new musical, Far From Canterbury. Winkler studied theatre, along with paddling outrigger-canoe and dancing hula, from a young age on Maui.

Winkler along with Sis, who plays Ado Annie, are both trans performers in the production.

MI: (Matt Inawat) Hi Hennessy! Congratulations on the show so far; and thanks for taking the time out to chat with us today!

MI: Tell us about your journey to "Oklahoma". What drew you to the audition and to the production itself?

HW: So I’ve always been obsessed with how these classic musicals that I kind of grew up with, and my parents grew up with, how they all have this weird dark tone to them. These weird kind of side story plots; these little plots that are just touched on and literally danced and sung over and around.

Which makes sense, since a lot of those musicals came out right after the war and the country was in a different place. The musical theatre was one of the main attractions of things to do. So people would go; they wanted to see something bright and funny so they could forget their husbands and brothers and fathers were dying at the moment. So therefore these plots were written into them; and they were kind of covered up by this like literally song and dance, you know.

But it always struck me when I was a kid, like "wait a minute, did they just murder that guy," or you know these like sexual floozies and it always just struck me as an interest. And I’ve always been interested in that side of it and apparently there is another guy named Daniel Fish who is also interested in that - and he is the director of this "Oklahoma" and he decided to bring those darker moments into the light and just turning the play on its axis just a little bit, just a few degrees.

I feel like we are in a different place right now, you know, and we want more truth in our entertainment. A little more starkness, a little more truth and he highlights those undertones. He brings a lot of joy and levity to the show still, but without really changing anything; he is just highlighting this stuff and so it’s like "wow, this guy is doing exactly what I’ve been thinking about." That’s what drew me to the show and so I auditioned for it.

MI: You brought up a good fact, especially about this show, the original musical came out right after the war. It’s been around for over 80 years and very few musicals have gone through five revivals, in addition to a motion picture. From your perspective what are some of the things that make this new revival stand out from its predecessors and how is it keeping it fresh for today’s audiences?

HW: Well that new perspective, well not new – it’s not a new perspective – the darker undertones for sure. The sexuality of it. There’s a trial in there where someone claims self defense after killing someone, and the county just kind of goes along with it. There’s different bodies onstage. There’s Bud Light cans. I guess, yea.

HW: They should! That’s what I was wondering!

There is literal corn on stage but a little less corniness to it. It’s played a little more realistically. It reminds me a little bit of a straight play with music and dance than a typical musical. The set is a little more stripped down so that you can really hear what this script is saying. And those things really pop in this production. It’s not just a pretty show it’s an involved, deep, wonderful show and yet these characters, here is what makes it different.

Judd Fry is usually a villain. He usually is played very villainous. In this version it’s clear to me, here is a man suffering from mental illness who would benefit from a therapist and some medication probably. Or here’s a guy who is convincing someone to commit suicide and that’s illegal nowadays. And that’s the hero doing that. The hero, right? - who you are usually rooting for. And this trial with self-defense and the community not meeting in the courthouse, rather just doing it themselves so hero and his new wife can just run off and be together and have a wedding. Which makes the moments of joy, you know Farmer in Common and Kansas City and these numbers that are just beloved they just make them pop and make them so beautiful. I’m just a big fan of this show.

MI: On that note, do you have a personal favorite scene, song or number from the musical?

HW: I mean, I get to do Kansas City which is so much fun and I’m dancing on tables and like crushing cans and it is just, it’s a great time and it is one of my favorite moments. I have a lot of favorite moments, you know any moment Benj is on stage I really love - Benj Mirman (Ali Hakim). I’m just a big fan of his. He is so wiggly and funny and great.

MI: So you play the role of Will Parker, how are you and Will alike or different?

HW: Oh my God, it is embarrassing how alike we are.

MI: That’s pretty awesome that you get to be authentic onstage.

HW: Ha. I mean I am truly typecast! We are both a little guilish, um but how are we different? I don’t think we are different. I mean Will and I, we love who we love. We are both willing to do whatever it takes. Maybe he is more single-focused than I am. But no, we are both pretty similar. We are both goofballs. A little slow on the uptake but we will get there.

HW: Ok so it was 1989. I was around 5 and I saw in California, at the Schubert Theatre, "Jerome Robbins’ Broadway" which was a compilation of a number of Jerome Robbins’ greatest dance numbers from throughout all of these classical musicals and compilations of Jerome Robbins’ works and the Broadway cast had taken it on tour. That was back when the original Broadway cast used to go on tour and they were in California and I saw it and so all of these musical dance numbers by Jerome Robbins and I was very confused because everyone in the audience was a grown up and I’m dressed very nice and there were all of these grown ups on stage as well acting goofy and wearing weird clothes and singing and I’m looking around me and feeling very strange about the whole thing and thought "this is weird."

And I didn’t know if I liked it or not. It felt goofy and I was like I don’t know how I feel about this. But then intermission came and the curtain came down and I was like "Wait a minute, it’s over?" And my mom said no it is just a cigarette break, it is called intermission. And I was so relieved to hear there was an Act 2, like a whole second half. I was so relieved that there was a second act. That was too much to ignore. So I watched the second act and I remember there was a guy with a trumpet and there were some numbers from "West Side Story" and "South Pacific" and by the end of it I still didn’t know if I loved it or hated it but I knew that is what I was doing for the rest of my life.

MI: That’s an awesome story! That was pretty early. So is there a dream role in any future play or musical that you would just love to portray?

HW: Dang, No, no I want to do them all. I would like to originate a role in a new musical. I just want to win a Tony so much. I don’t know, this is a dream role. Will Parker is great. As I said I am very close to Will. You know Annie used to be a dream role of mine. Then I transitioned so now I get to play her boyfriend.

MI: You're here in Chicago for a couple of weeks - in between dodging the freezing cold, what's on your to-do list while in town for the show?

HW: Deep dish pizza, deep dish pizza for sure. It’s gonna be super cold when I am out there. And I would like to go to the Art Institute and I am really looking forward to getting inside that theatre. It is such a beautiful space with such incredible history.

MI: It is, and if you get the chance to explore all of the different theatres while you are here for Broadway in Chicago I would do it. The architecture is absolutely amazing.

HW: Oh yeah, if they will let me in I will. And that is something fun that you can kind of do on your own, too. It is such a weird time right now.

MI: Even after all these years, I still look up at the architecture and ceilings whenever I'm at one of our local theaters...

HW: Oh yeah! You can trip out on that.

MI: In closing, if you could sum up your theatrical life in a musical title what would that title be?

HW: "How To Pee Standing Up"

Individual tickets for Rodgers & Hammerstein’s OKLAHOMA! are on sale now and range from $27 to $98 with a select number of premium tickets available. Tickets are available now for groups of 10 or more by calling Broadway In Chicago Group Sales at (312) 977-1710 or emailing GroupSales@BroadwayInChicago.com. For more information, visit BroadwayInChicago.com.