We are fun and light hearted. 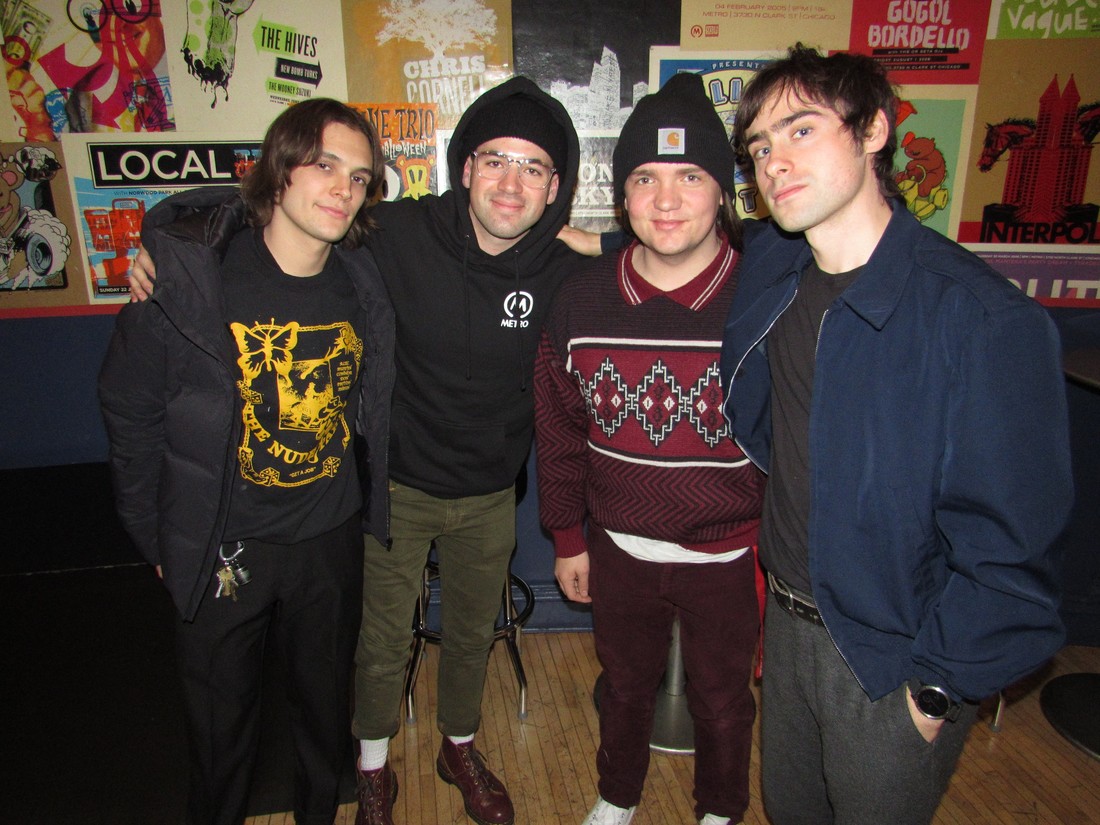 Garage band White Reaper is rocking into the spotlight with a headlining tour that brought them to Metro for a sold out concert recently. The group is composed of Tony Esposito, Ryan Hater, Nick Wilkerson, Hunter Thompson and Sam Wilkerson.

After releasing several albums in the past, You Deserve Love is their current first major label record. The song “Might Be Right” is climbing up the charts and bodes well for a strong year in 2020.

Several members of the band talked backstage before their highly anticipated show.

JN: (Jerry Nunn) Is everyone from Kentucky?

JN: How did you join the band?

HT: Through fortuitous events where they came to South by Southwest in 2015. We became friends. In 2016, they stayed at my house and I ended up playing guitar with them. They offered me an invitation to join the band and I accepted.

My first rehearsal with them was in May of 2016. My first day in Louisville was during the Kentucky Derby!

JN: Where did the name White Reaper come from?

TE: (Tony Esposito) In October a long time ago, we were in a Halloween store and saw a prop for a decoration. You hang the item on the tree. On the tag by the bar code it said, “White Reaper.”

SW: (Sam Wilkerson) We were 18 years old and this was before we even played a show.

TE: Do we regret it? Maybe…

JN: You have to make it work now.

SW: People think we are a metal band, but we are the other side of the spectrum.

HT: I must say, it’s not as scary as it sounds!

JN: How did you sound originate?

TE: Being a traditional pop rock band, we thought it would leave a lot of territory to toy around in. It’s all of our favorite music to listen to. We wanted a fun ballpark to play in.

JN: You have your own sound though and not just like everyone else.

SW: We have always wanted to define ourselves as rock in the classic sense. Every kid out there has a little rock in them!

JN: “Might Be Right” has a retro feel to it. What was that influenced by?

TE: I always wanted a song with a drum beat like that. It’s not slow necessarily, but it’s slower than other songs that we have.

SW: There’s a little more room to dance with it.

TE: We wanted to groove with the song.

JN: What are the differences of releasing music before and now being on a major label?

SW: One of the clearest differences is that it came out quicker than when we were on an indie label. The label has an influence on when the record plays.

There’s not a lot of difference. Tony writes all the songs basically. They checked in a few times to see how the demos were going. People have a scary idea of a major label, but it’s pretty much the same.

TE: It wasn’t totally different. There were just more resources for us. We were more empowered in the record making process.

JN: That’s good because people sometimes think the process is controlled by a corporation.

HT: They were really hands off. When we asked to do a certain thing, they were very accommodating. They didn’t force anything on us. Our manager does that!

JN: It shows your manager cares. Is the track “1F” based on a place?

TE: It’s a highway in Cincinnati. I was coming home from my grandma’s house, who lives just outside of Dayton. I thought the name of the highway exit “1F” was cool, so I ran with it.

JN: The video has a lot of fruit in it.

HT: That was a creative decision made by our director Mason Mercer. Music videos are not our bread and butter, so to speak. It’s a secondary concern of ours. We give broad access to everyone else to make things happen.

SW: We showed up to set with bags of fruit!

JN: You have a song called “Eggplant” and that’s banned on social media now.

TE: That’s an emoji ban. That’s after the gun emoji was changed to a squirt gun.

HT: You can make anything a phallic reference like a banana. That’s a bit much.

TE: If you ban the eggplant where do you go next?

HT: Exactly. That song is named after the food we ate the day we started working on it. We had garlic eggplant.

JN: The name of the album You Deserve Love is the greatest title.

HT: Thank you. We all decided on it and thought it was nice. For some reason we were all in with that name. We wanted to put a heart shape on the cover and just stuck with it.

JN: Did the song come first or the album?

HT: We named the song after the album. We retrofitted the name.

JN: Jay Joyce produced the album, who worked with Cage the Elephant and Little Big Town. How did he decide the direction for the record?

TE: He really wanted it to sound like a live band. A large portion of each song were live takes. We all sat around in his studio, which was a church originally. When he bought it was in rough shape and had been abandoned for a while. They came in and fixed it up and took all of the pews out. It was a big empty room with a wooden floor and tall ceiling. We were just in there. it was Jay, the engineer and all of us in the band.

We jammed every day and played over and over. We wanted to make things perfect, but Jay knew there would be slip up and wanted it to sound like a real band. I think he was excited to work on a record that wasn’t so streamlined.

JN: What one thing you have require on the tour bus?

HT: We have a fart wagon. We would tell you to not step into it. It’s very stinky.

HT: That’s my favorite thing with the band. If there are paper towels, I appreciate that.

SW: A communal pack of gum.

TE: I like to have pillows in there, but they get so dirty.

HT: I am very strict with my pillows. I don’t like anyone else touching them. I don’t like them floating around. I bring about five pillowcases on tour with me.

JN: Where does this come from? Texas?

JN: What do you want to tell people about your live shows? You talk much on the mic?

SW: Every show is it’s own unique experience.

HT: We typically mix up the set list, which can effect the energy of a set. I think tonight it will be more hyped up and fun. Sometimes we will just blow through the whole set without breaking, which is fun to do. We act stupid once and a while and have half baked covers.

JN: You are playing a historic venue. I’m sure there are some ghosts around here.

TE: That’s what they are saying that there is a nice ghost here called Marilyn. She apparently killed herself here.

JN: In the Metro?

TE: Well, before it was the Metro.

JN: Run! So are you playing your song “Saturday” on a Saturday?

SW: We don’t know how to play it yet.

HT: We were rehearsing it a lot this week.

JN: I heard you are Jimmy Buffet fans.

SW: We have done “Cheeseburger in Paradise” a little bit.

TE: We do the bridge with “I like mine with lettuce and tomato…”

HT: “Heinz 57 and french fried potatoes.” It was a phase really.

JN: A phase like that Escape to Margaritaville musical, that’s already gone! Is there one famous song you wished you had written?

TE: We are going on the road. We will be touring a lot. Hopefully, we get in the studio and make another record soon.

HT: We are opening for Pearl Jam this coming summer.

JN: Have you met Eddie Vedder before?

HT: We have and he’s very nice.

JN: He asked you to tour with them?

HT: The twins dad worked on a book about The Who and Eddie Vedder wrote the foreword to it.

SW: My dad played the record for him. It was a big deal.

HT: He played a festival and wore a White Reaper t-shirt. They offered us to play some European dates for their tour.

TE: It will be our first European tour, so that’s exciting.

JN: What do you want to tell people about The World’s Best American Band?

TE: We are fun and lighthearted. Check us out on Spotify!