These questions of how religion should be in life are relevant to everyone. 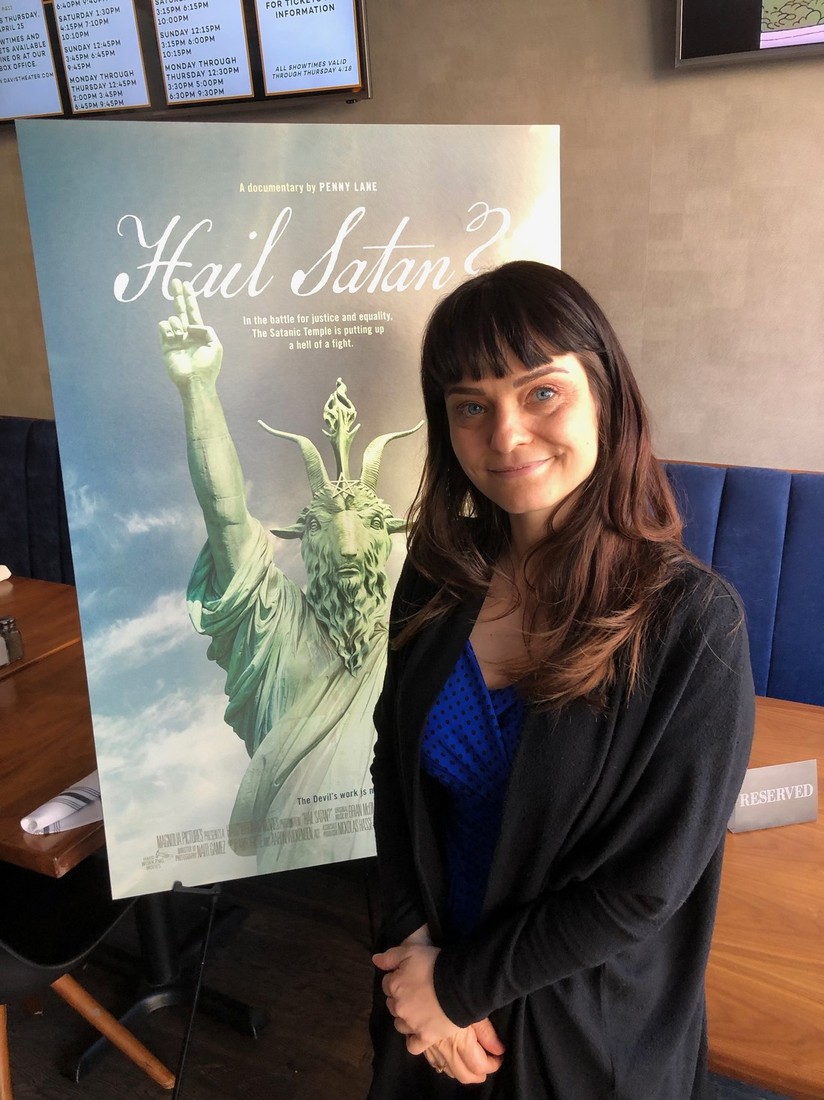 Hail Satan? is a new documentary about The Satanic Temple battling the government on religious freedom with a grassroots campaign. Satanists believe in the separation of church versus state and atheists are described in the doc as being boring.  As acclaimed director Penny Lane depicts in the movie, Satanism is about not fitting into mainstream religion.

“It’s called Satanism because there’s nothing else to call it,” says one person in the documentary.

Much of the film follows the group fighting to place a statue of Satan next to the Ten Commandments outside of a courthouse. Many of the LGBT community join in the cause after religious freedom is used against them in society. Hail Satan? shows what it’s like to be an outsider and what someone living on the fringe can do about it.

Lane is an independent filmmaker and an assistant professor of Art History at Colgate University. She is known from the 2012 film Our Nixon.

Lane sat down to talk to about Hail Satan? at the Davis Theater during a documentary film festival recently.

PL: (Penny Lane) Originally from Massachusetts, but have live in New York my adult life.

JN: Did you always want to make films?

PL: No. It happened step by step accidentally. Now I teach students filmmaking, but I try to remind myself that when I was a college student I never would have taken an art class. I would never have had the self confidence to do that. It’s interesting to constantly be remembering that now.

JN: Now movies can be shot with a telephone. Was filmmaking different when you started?

PL: No. When I started the digital revolution had already taken place.

JN: How did you wind up with this project?

PL: I heard about it on the news. From a distance, it seemed pretty funny. It was surface level entertainment, but the more I looked at it the more interesting it got. My idea of a Satanist was not reality. At the end of the day, they were a religion and had deeply held beliefs.

There’s nothing like this in any temple. If you want to understand this quickly, it’s not going to happen. It takes 95 minutes to even begin to understand and see what is going on.

Is it religious or political? Well, it’s both!

JN: It was hard for me to explain this movie around the office.

PL: It is hard. It’s a bit of a bait and switch, but I hope it’s a good one. There is a bit of interest that you go to fulfill, but then it turns out more interesting and deeper than you ever would have guessed, based on the poster.

JN: When people talk about this movie it’s going to start a conversation.

PL: Exactly. It raises a lot of questions at the beginning. Welcome to my life!

I hope people will see it and it won’t be what they think it will be. I don’t know what people really think, but they might think it’s about evil people that kill babies. It’s obviously not. They need to watch the trailer.

Promoting this doc will all get worked out by marketing people. I’m glad it’s not my job!

JN: Why is the title end with a question mark?

PL: For exactly those reasons. The strength of the image of Satan is so intense. That is part of the draw of the movement. Picturing the title on movie posters and marquees, I started to imagine that putting the question mark made a better title in a funny way. It was more representative of the movie. It’s so full of questions and contradictions. I’m hoping the question makes the movie a little more inviting then let’s say an exclamation point.

JN: Did you run into obstacles to get the movie made?

PL: Yes and no. There was a longer development process because there were so many questions. Magnolia Pictures came on and funded the film. They were a hundred percent onboard from the beginning. They understood everything that we were doing and they were the perfect partners.

JN: There were many things in the movie for LGBT audiences.

PL: Yes and we could have gone further! This was just an introduction so people can look up more about the subject later.

The percentage of LGBT people is high in that community. It’s really not that surprising. Many people in the LGBT community have felt alienated and ostracized in so many ways from religious institutions. When you think of a religion that is starting from scratch, you can see the pink mass and people kissing over the grave. People thought it was a joke, but it was not common at the time. It was a very clear signal that was sent out that if they were gay then they were not welcome in this particular church. It was an important fact.

JN: In the movie there’s a whole section about Fred Phelps.

PL: It’s such an interesting parallel to Westboro Baptist Church and The Satanic Temple. At the height of it, Westboro had 20 members, but we all know their names. Why? Because they are really good trolls. They generate outrage and headlines. TST did the same thing. That is how they got their numbers.

Unlike Westboro, they are actually very successful. They have big numbers now.

JN: Can people in Chicago join?

PL: There’s a local chapter. They are all different. You see this in the film a lot, there was attention on how autonomous each chapter should be so they can pursue their own goals and how much should be dictated from the top. It is being negotiated every day. It’s a new movement, so we will see how it all turns out.

The chapters do really different things depending on the part of the country they are in. it makes sense because the needs of community in Arizona would be different than Seattle.

In some parts their fight against bureaucracy is front and center as opposed to other places like Chicago. It’s a bit more of a social platform. They can just have dance parties.

JN: I used to live in Oklahoma and there’s a whole part where that statue was removed.

PL: You don’t live there anymore, so no more you and the Ten Commandments in Oklahoma!

JN: Why were faces blurred out?

PL: There are people that would be adversely affected for being known to be a Satanist in their community. People hate them. The amount of death threats and attacks is not anything to be shrugged off.

JN: What do you want audiences to get out of this film?

FL: It really depends on where you are starting from. The battle that the temple is fighting is really from the front lines up. It is equally relevant to every American. It doesn’t matter if you are religious or not religious. These questions of how religion should be in life are relevant to everyone.

Most people will not want to be a Satanist. The whole point of being a Satanist is that most don’t want to do it. They are proudly wearing their minority status, but everyone does have a stake in that fight. I think that people walk out of the film with a renewed energy for that fight. It does affect all of us.

I think the role that The Satanic Temple has taken makes them legitimate heroes. That is not what anyone walking into the film expects.