AGT's We Three sing in harmony

Love and respect is important to us. 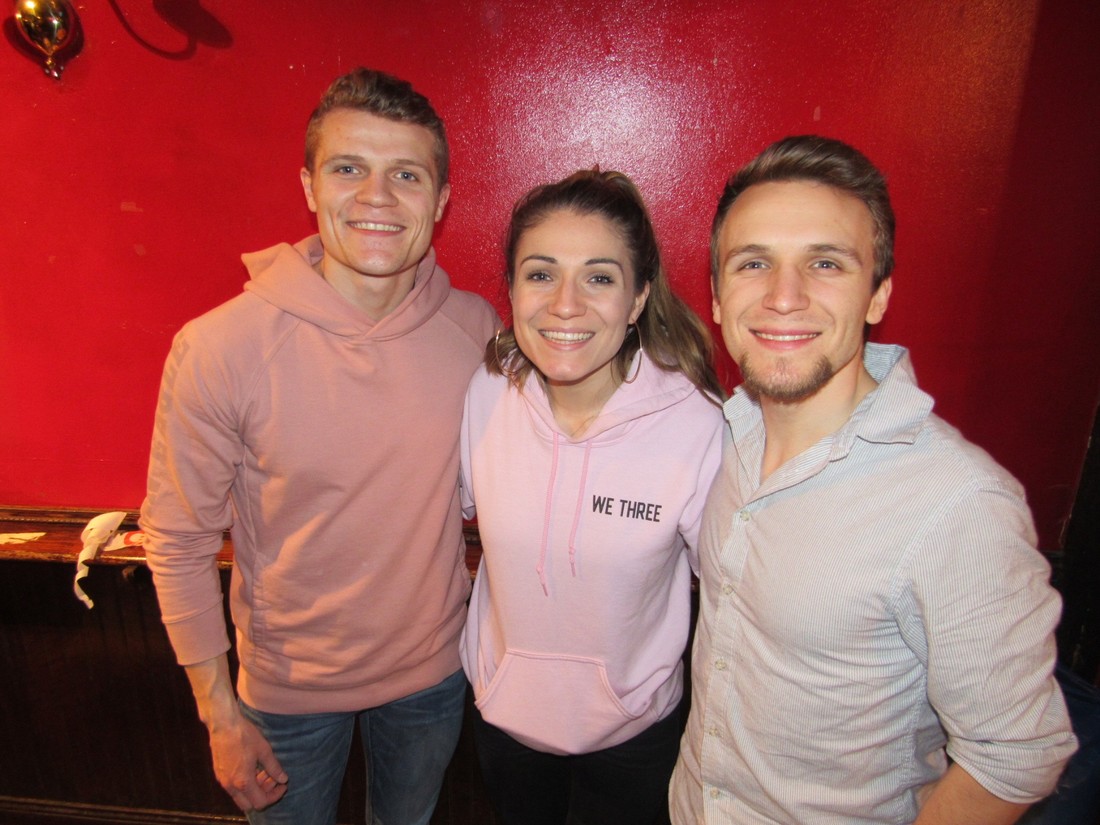 America's Got Talent We Three arrives in the Windy City

We Three is a pop group from McMinnville, Oregon made up of three siblings Joshua, Bethany and Manny Humlie. After writing several songs, they were launched into national attention with the NBC show America’s Got Talent. After competing until the semifinal round, the trio took off to new adventures with a debut album.

We Three talked before their recent Chicago show at Subterranean.

JH: (Joshua Humlie) We are from Portland, Oregon, well, about 30 miles south of there in a small town right in the heart of wine country.

JN: How did you get started in music?

JH: We grew up in it. As kids it was part of our education to play an instrument. We each took piano lessons at a young age. I did drums before that and Manny picked up the guitar. We doubled up on some instruments. Once we became more accomplished we played in dad’s van. We were featured in community events they were playing. Slowly, but surely, we began playing together. We moved from covers to originals and here we are.

JN: How did this lead into America’s Got Talent.

BH: (Bethany Humlie) We started taking it more seriously. We had been working for 10 years so it didn’t happen overnight. They found us on Instagram. They saw three siblings that looked like they liked each other so they clicked our profile. They asked us to send in some videos and we got an audition. They told us they only wanted us to do originals from that point and they flew us to LA. It was very fast.

JN: You didn’t go to a cattle call?

MH: (Manny Humlie) No. We bypassed all of that. When we asked around we found out lots of people were scouted.

JN: Maybe they are getting away from the open audition idea for the show. Do you recommend for a people to put out their music on Instagram.

BH: Oh, yeah. You never know who’s looking! They found us from a picture.

JN: What’s the dynamic of being in a family and touring? Is it easier?

JH: Just like anything, it’s hard and it’s easy. Growing up we knew how to push each other’s buttons and how not to. We all want to make this work.

JH: We are living the dream.

JH: This is our first time.

BH: We love it. This is one of our favorite stops so far.

JN: Does it help to have three people when there are a lot of fans?

BH: We have a really amazing fanbase. They are just really loving people.

JH: They are all ages. We had really young kids there singing the songs, then we had an 80 year old lady who was just dancing.

MH: We have a wide range, which we are happy about.

JN: What did you hear from fans when America’s Got Talent came out?

BH: The second our episode aired my phone died because of the notifications. The first night we hit 15,000 in one night.

JN: You never performed any covers on America’s Got Talent?

JH: No, and we didn’t realize how rare that was at the time on the show. We were honored to share original music.

MH: That is what we wanted to do all along.

JN: If you do covers then people will compare you to someone else.

JH: We had some fun covers to play, but that was not why we were there. We had a mission going in.

JN: The judges seemed very supportive of you.

BH: They were great.

JN: How would you characterize your style?

JH: Call it pop/rock. We are a pop band definitely.

BH: We have rock roots.

JH: We also pull from hip hop and other things, but we have condensed it into pop/rock.

JN: Were there artists you looked up to growing up?

BH: Ed Sheeran is one.

JH: We want to have real lyrics and he is good at that. It felt like songwriters disappeared for a while because before that we had Bob Dylan and Joni Mitchell with lyrics and melodies. Ed Sheehan came along and brought that back to this generation. Writing songs was cool again.

We love Maroon 5 as a band. They have stayed current with the times.

JN: Talk about the song “Makeup.”

MH: With social media these days you are always comparing because you have all of these people in front of you all the time. I was hoping it would be an anthem. People don’t need all the makeup and should take it off. It’s a very simple, but real thing that people don’t hear enough of.

JN: “Lifeline” is the newest video and seemed very diverse. Was that the point?

BH: Yes. We had people from different walks of life. We just found beautiful humans that had so many unique characteristics and traits.

JH: We knew those people and their stories. They could each tell you why we chose them. They had different backgrounds.

JH: Love and respect is important to us.

JN: How do you connect to an audience with very personal lyrics.

BH: That is what inspired the “Lifeline” music video. It’s the connection that people had to that song. We did not expect that when it was written. It turned into an anthem and the tour is name after it. It has led the way for so many people in terms of mental health. People take different things out of the song.

MH: That song and “Heavens Not Too Far” were written for AGT with “Lifeline” only written two weeks before. We weren’t trying to connect with anyone. We just sang it because it was what we felt. We hoped they felt the same and they do!

That is where it will always come from because it’s honest music.

JN: What would you tell people about the group that don’t know you yet?

JH: We are real and honest. We have a lot of fun.

MH: We are weird.

JN: You don’t seem weird to me.

JH: We are running on a few hours of sleep.

MH: We are probably just tired. But if you see our show then you will see some weird dance moves.

JN: Do you plan to do cover songs in the set today?

BH: We do two, but we want it to be a surprise.

JN: Tell me about the Harry Potter aspect to the concert.

MH: If you look at the poster through your phone and download the We Three app. If you follow the instructions then the poster comes to life. Just like Harry Potter, we start moving and talking to you.

JH: You are transported into a different room where we will talk to you. There’s a new song that you can hear and some hidden Easter eggs.

JN: Have you been to Universal and The Wizarding World of Harry Potter?

MH: I’ve been rewatching the movies.

BH: I have read the books about seven times each.

JN: What are plans for the rest of the year?

MH: We are living in the moment, but plan on writing new music that will be out soon!