The overall vibe to the show is like a big party. 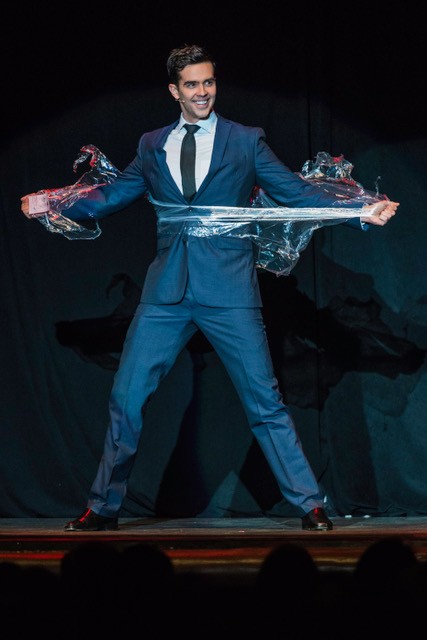 Magician and actor Michael Carbonaro is heading to The Chicago Theatre on March 24 with an exciting new live act.

Raised in New York, he attended the NYU Tisch School of the Arts. After several successful hidden camera segments on The Tonight Show, he launched The Carbonaro Effect on TruTV to big success.

He’s been married to actor Peter Stickles since 2014 and made appearances in Another Gay Movie, All My Children and Law & Order: Special Victims Unit.

Carbonaro talked on the phone the week of his arrival back to Chicago.

JN: (Jerry Nunn) Are you excited about coming to Chicago this Sunday?

MC: (Michael Carbonaro) I am! i love coming to Chicago because we shoot the show there. I know a lot of people that I have fooled there before and are aware of the TV show that will come to check it out.

JN: Where in the world are you calling from?

MC: California. I am shooting some of the specials for The Carbonaro Effect.

JN: Tell our readers about the live act and what goes into it.

MC: This is my second time performing at The Chicago Theatre, which was a favorite of mine and the crew of the entire last tour.

It’s a spectacular space. I saw all the names signed on the wall in the back. You can’t think of an artist who hasn’t played there. It’s truly awesome.

The live tour is not only a wonderful way to meet fans, but show them the things they see on TV. They may question if things are pulled off with camera tricks. Now they get to see it live, right in front of them.

There’s a new piece in the show where I talk about a particular effect that was called out on Reddit and YouTube as being fake and not real. I ended up performing it right there in front of everybody. The crowd goes crazy and there’s a validation with that. I am not trying to prove myself with this show by any means, but it’s a fun segment.

The overall vibe to the show is like a big party. It’s not a kiddie show, but it is an all ages show. I think it’s the same with the TV show. People write in that it’s a show they watch all together as a family. It’s not watching cartoons with the kids, but more like everyone likes it. The same is true with the live show. I get such a diverse spectrum of different age groups that come to see it. Everyone is there to have a good time. There’s laughter and amazement.

I bring people up from the audience to help out. The tricks are sometimes right there in their pockets. I come out into the crowd to perform. There’s a screen where I bounce back and forth showing clips of things.

They know I am a magician, which is different than the TV show. That doesn’t really matter. I can still mess with them. They don’t know if I am telling the truth or not. It’s a fun line to dance between, the reality and the illusion, the entire night!

JN: Anything special for LGBT audiences?

MC: I bring my husband around on tour. He gets to play my assistant so to speak. He might not come to Chicago. We’ve had an issue with a sick cat.

I will be signing posters at the end of the show at the meet and greet, someone will always bring at least one of my Another Gay Movie DVDs as well. I love meeting people. Some of them have been fans forever. That’s always super special.

JN: How is it performing in big spaces as opposed to small spaces?

MC: I love it. There’s an intimacy in The Chicago Theatre even thought it’s huge. Everyone has a good seat. It’s cozy and beautiful inside. It doesn’t feel like a huge arena or event space.

There’s a screen there to magnify. We are very judicious about the image magnification. It’s not a show where you sit and watch a television screen the entire time.

I’m a stage performer. I went to school at NYU for drama and acting. Most of my life I have been performing for live audiences. This is a real chance for people to meet me as an entertainer.

JN: Do you have help to come up with these bits?

MC: Yes. Most of the guys I work with on my TV show I met as a kid at Tannen’s Magic Camp. It is still running. We all go back and are camp counselors there. It’s a week long of intense magic. I met all these crazy people who loved playing pranks and making magic. They still tour with me and come back to write for The Carbonaro Effect in a room together.

Tannen’s Magic is a famous magic shop in New York City. They moved to Pennsylvania. It’s an incredible experience to anyone that is serious about magic.

JN: When you film The Carbonaro Effect do people recognize you?

MC: Oh yeah. We have had to up our disguise game anywhere from silicone noses to beards, wigs and glasses. I love getting to play those different characters.

When I am out at big events I have to be in disguise now otherwise people will be pointing and coming over. Now we are quicker at pulling it off with only a few people recognizing me. We can still use it as a funny take for the show.

JN: That episode is coming out soon?

MC: Yes. We are going to do some Double Take specials where we are doing some of the same effects we did before. On the show I usually just show one person before moving onto the next trick. Many shows will show the same trick with different people. We had just never done that.

We went back to see old footage with alternate takes. We are now showing the other footage in a show called Double Takes. Fans are eating it up. Now we can talk to the fans on camera and host a special.

MC: We are soon airing Inside Carbonaro and Double Takes. We shoot again this summer in Chicago with season five starting this fall.

JN: Chicagoans need to watch out then?

JN: Have you been to Boystown while shooting here?

MC: We haven’t. My colleagues have been telling me to. I am going to do it this time. That’s a promise!