The Wrecks talk about the band, return to Chicago

Coming up with a band name sucks. 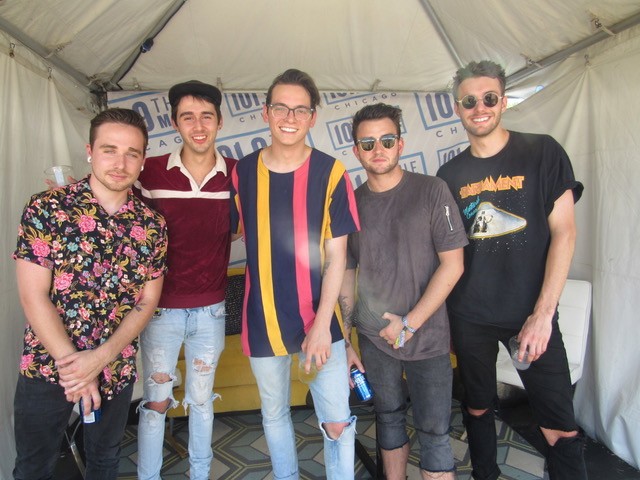 The Wrecks Tear Up Chicago

Rising band The Wrecks are ready to raise the roof and heading back to Chicago on tour.

The group is composed of Nick Anderson, Aaron Kelley, Nick Schmidt, Westen Weiss and Billy Nally. The five members of the band sat down at Lollapalooza to talk about their roots and live show.

AK: (Aaron Kelley) I’m Aaron and I play bass. I am from Wisconsin, so very close to here.

BN: (Billy Nally) I’m Billy and play drums. I am from Jersey.

NA: (Nick Anderson) Nick I sing. I am from New York.

NS: (Nick Schmidt) I play the guitar. I am from Jersey too.

WW: (Westen Weiss) I’m Westen I play the guitar. I am from New York too.

NA: Aaron and I were trying to start a band years ago. We connected through music. The other guys were working in a different band. We all joined together.

JN: Were there artists that you looked up to?

NA: We liked Jett, The Vaccines and The Strokes. We wanted simple songs, but guitar driven and edgy. It turned into noise rock. That is where it started, but has since evolved immensely.

JN: Where did the name for the band starts?

NA: Someone just said it one day. Coming up with a band name sucks. We drive and look for names. Would Speed Limit be a good name? What if we take the vowels out of it?

WW: There is actually a Jersey cover band called The Wrecks.

NS: We sent them a  message but didn’t hear from them.

JN: Have you ever hurt yourself crowd surfing?

NA: I have knocked out a 14 year old before.

BN: I have had a shoe stolen.

AK: We played a show once where a mom and a daughter came up to me after the show. She said we gave her daughter a concussion and had to go to the hospital. I felt so bad.

NA: He signed her concussion. It was fine!

JN: Talk about a wreck! Tell people about your song “Panic Vertigo.”

NA: We wrote it a year ago and recorded it in a barn in Western New York. We got a record deal and had a budget for it. We had a producer to make it right. We had self produced our first EP so that is the only way we knew how to do it. We made songs for a month and finally sounded like a band. After blowing the budget it was up to us. We had no money left and there was a studio in a barn that our friend owned. He gave us the keys and we move in there. I stayed at my grandma’s house then went to the barn every day.

We made the one song and are doing it again this summer.

JN: Sounds like a grass roots production in the barn.

NA: It is, with gophers in the backyard.

JN: The gophers are your fans?

NA: They are, but they don’t like it when you at them. We just want to pet them.

BN: I planted corn in the backyard so I am waiting for a cornstalk. I don’t know if that how it grows.

NA: You have to plant it in rows.

NA: I was in London writing for a pop artist. He had left for the night and I work on those songs. I was strumming it out and the chords just came. I thought it would go really well with The Wrecks.

Fast forward to two years later, we finally put it out. There are different versions out there after performing it in LA. It took us doing it in the studio to crack the code on it.

JN: Were you trying to capture the live feel with the video?

NA: Yes. We were going to make a video for it but we ran out of time and just made a live video. We wanted to show the energy that is out there for our shows. We had so much fun.

WW: It was an advertisement to come see us live.

NA: It is like “Favorite Liar” with a live video. It is kind of hidden on YouTube but if you look for Official Killer Robot Edition it is a wild ride.

WW: It is lurking in the depths of a weird part of YouTube.

JN: What do you want to tell people about you live shows?

NA: We keep the crowd engaged. We are a very self aware band. People may not know who we are, but hopefully they are into it. I want them to come see us again.

When we are the headliners we go in with confidence. We play to each crowd. we joke with them. We bring people onstage. We make fun of them. They make fun of us.

After rocking at Lollapalooza the band is set to return to Chicago on Nov. 20 at Lincoln Hall on the Panic Vertigo Tour.