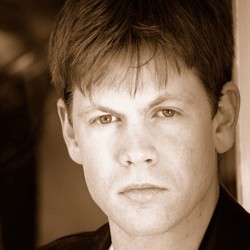 Christopher Rice is best known for being Anne Rice's gay son, but he's also the author of suspense thrillers, the fourth of which, Blind Fall ( $26; Scribner ) , is out this month. Set in California, the novel centers around John Houck, a returning Iraq war veteran trying to locate his former captain, Mike Bowers, who nearly died saving his life. Houck finally finds Bowers, but murdered in his own bed—and the man he thinks is the murderer turns out to be Bowers' lover, Alex Martin.

WCT: (Windy City Times) You said in a 2000 interview, “I think I've said all I can about being gay for the time being.” [ Rice laughs. ] You also said, in 2002, that you were ready to shrug off the label “gay author.” And yet Blind Fall overtly concerns gay characters and gay themes—what changed for you?

CR: (Christopher Rice) What I meant at the time was that the painful journey of a young gay man out of the closet—I felt I'd gotten all the juice out of that creatively that I probably could. I couldn't continue to write novels that all featured characters [ like ] Steven Conlin [ the gay character in Rice's first novel, A Density of Souls ] , who's largely defined by his sense of rejection and his anger. And if I were going to write about characters in that situation, they would assume a different role. [ In ] Blind Fall, the major character is a straight battle-scarred Force Recon Marine and the gay character in it is not, in my opinion, the sympathetic character; he's not the hero. And he's certainly not the victim. While I didn't phase [ gay themes/characters ] out of my work, I think [ the ] placement began to change.

I got a lot of interesting responses from readers when I began to cast the gay characters in different roles. ... The gay character in The Snow Garden hovers just above villainy. He's duplicitious, he's manipulative, he's created a completely fake identity for himself. He's lied to everyone in his freshman class about just who he really is. So I was afraid of making that shift just because so many young gay readers reacted so strongly to the character, Stephen.

WCT: The book addresses two large political issues: the Iraq war and gays in the Marines. You've now indicated that there's a third element at play for you here, in terms of how young gay readers might respond. Do you feel there's a responsibility [ to them ] on the part of the gay author?

CR: Yes. What I feel is a sensitivity and maybe even a level of anxiety about what the reactions are going to be. That anxiety comes from making decisions that may not be very popular with the gay audience. So far, I haven't had a tremendous backlash, but I was determined that priority one for this book had to be my desire to create a very successful, page-turning entertaining read. That, above all else, is my job. And the other issues are addressed, but I don't attempt to resolve them. I do present pretty compelling evidence about the sacrifices the gay marines have to make to be Marines, and I think I lay that pretty bare. John Houck is my main character, and I love him dearly, and I spent a year and a half with him. But he and I would vote for different people come November in the presidential election. His politics were not as compelling to me as a writer as the conception of a character who's driven by conscience and guilt. And a code of honor that transcends political belief, in my opinion.

In researching the book and in sitting down with Marines, gay and straight, and in talking to them, maybe it was just what they were doing because they presumed I would feel a certain way politically, but they wouldn't get political with me. I would try to nudge them in a certain direcetion: “So what'd you think of why [ we're ] over there?” and they would duck the question. Or they would literally say, “No comment.” Evan Wright [ author of Generation Kill, about being embedded with Marines ] said, “These guys aren't fools. They know we're probably over there for reasons that have more to do with oil than anything else, and they don't care because their job is to fight to the death for the man standing next to them.” And when I heard that that was really their code, that was what these guys followed, I thought, “Well, this story idea that I've had for a while—straight Marine accepts fact that his buddy was gay and then accepts his boyfriend and helps [ him ] —it's not so implausible. Because if he's a character who's going to be true to this code, then that would follow.

CR: [ Chuckles ] I've had gay Marines in my life. I've had personal relationships with several gay Marines; I've known them for the past maybe 10 years. When I moved out to southern California, I began meeting them because [ one of the side effects of “Don't Ask Don't Tell” ] was that they stopped conducting random sweeps of gay bars to catch people, because that would be asking. So they were kind of members of the gay community in West Hollywood; they were out there and I was meeting them. That's what first opened my eyes to the strange netherworld that they inhabit, which is an attractive world for any crime writer because it's about duplicity, and secrecy, and war, and high stakes, and having to hide and evade ...

A couple of years ago, there was a lot of really fine non-fiction that came out about the Marine experience in Iraq. It was not political but more [ like war diaries ] —there was another book called One Bullet Away by a Recon Marine Captain named Nathaniel Fick who was in the same unit covered by Evan Wright. They were almost like companion books to one another. And he was a Dartmouth graduate, a very privileged upper-middle-class white guy who'd chosen, after graduating from this Ivy League University, to enter the Marine Corps. He articulated these principles from a perspective I could relate to.

And then, if you're a crime writer, hopefully you've been fortunate enough to tap into this enormous community of crime writers that exists throughout the country. We're kind of a welcoming and supportive bunch. A lot of times you'll have some Mafia-style introductions [ laughs ] to various research contacts. I had a friend who would introduce me to their Navy Seal guys or to their Marines. And I had been contacted by gay Marines independent of that, who were fans of my work, who were willing to help me do it. [ But ] there was no substitute for actually sitting down and talking to these guys and seeing their unique perspective on the world. Because it is a unique perspective. They have been trained to believe, and they act as if they are, a breed apart. And that was an interesting thing for me because so much of what they're taught [ is that ] mainstream society is weak and defective and [ that ] they provide a very special protective service for it. And that is, in a very weird way, what a lot of gay people believe about their own position in the world: [ that ] mainstream society is hostile and ill-informed and gay people bring beauty and culture [ chuckles ] to places where it might not exist. So all of that was fascinating to me and all of that came from the real life aspect of research.

WCT: Houck grew up in poverty, and lives in a trailer park. Given your own class background, how did you go about researching poverty?

CR: Well, I don't know if I'd say that John grew up in poverty—there's a tragedy that alters the course of his life. I will say that ... I was rich growing up but I did not have rich friends. I did a lot of community theater in high school that took me out of the privileged community I lived in. I was all over town and I met people. I was never surrounded by people who had the same opportunities and gifts that I had. Certainly, my extended family in New Orleans did not come from old money [ laughs ] ; we were not landed wealth—we were oddballs in the social hierarchy of New Orleans. I've had contact with poverty; I've had cousins who've lived in profoundly eye-opening conditions [ that ] then fed into my depictions of it in this book.

But there's also a uniquely California element to the life that I've depicted in this book. That came from stepping out into the world. I mean, you've got a setting … You've got ranches and Palm Springs and all these rich, glittering communities, and you really don't have to drive very far before you're in trailer-park land. I went out there a bunch, and I went to parties out there with Marines and I saw the way ...

I think it's shocking to a lot of people, the life that is waiting for a lot of military people once they get out. There're not huge benefits for them. Life is a struggle. It made perfect sense that John would end up in a trailer park after having been in Iraq, of all places. I think a lot of Americans assume, “Oh, they'll have some nice cushy retirement package.” But that's not how military service works. And that was something I learned.

WCT: You've always embraced being a suspense thriller writer. Do you see Blind Fall as somehow redefining what the war novel can be?

CR: I don't. I don't see it falling into that. I think that's a very prestigious category and mostly one occupied by writers who've experienced the war directly. I think what we are seeing now is a lot of thriller writers using popular modes of story telling to address what's happening to some of the men and women who're coming back. That's what this book does. But I'll tell you, honestly, if anything, the Iraq war almost scared me to out of writing this novel because I didn't want to write a political novel about the Iraq war. I think there's a message laced through the book that John Houck needs to go help someone who actually wants to be helped. I think that's certainly something that can be said about the Iraq War: We're over there trying to save people who didn't ask us to be there and who didn't want to be saved by us. And that's something he's attuned to, and something a lot of military people are attuned to.

I wanted it to be a story about self-acceptance. I wanted the suspense of the story to come entirely from whether these two characters were going to accept one another. This novel was a departure for me because I tell you who the killer is so early on. The revelation in the novel was not going to be the revelation of a concealed fact. It was going to be about what this character was going to do in response to the facts that were presented to along the way. I really wanted the focus to be on that. This was an idea that had come to me long before the Iraq war, long before 9/11, I wanted it to be about what it means to be a Marine. and what gay Marines do to that conception. Being a Marine in Iraq is a piece of that, but it's not the whole picture.

Christopher Rice will be at Barnes and Noble in Skokie's Old Orchard Mall Sat., March 29, at 3 p.m. For more info, see www.christopherricebooks.com .