'Snowfall' lands on televisions this summer

Thank god there is so much integrity in this story. 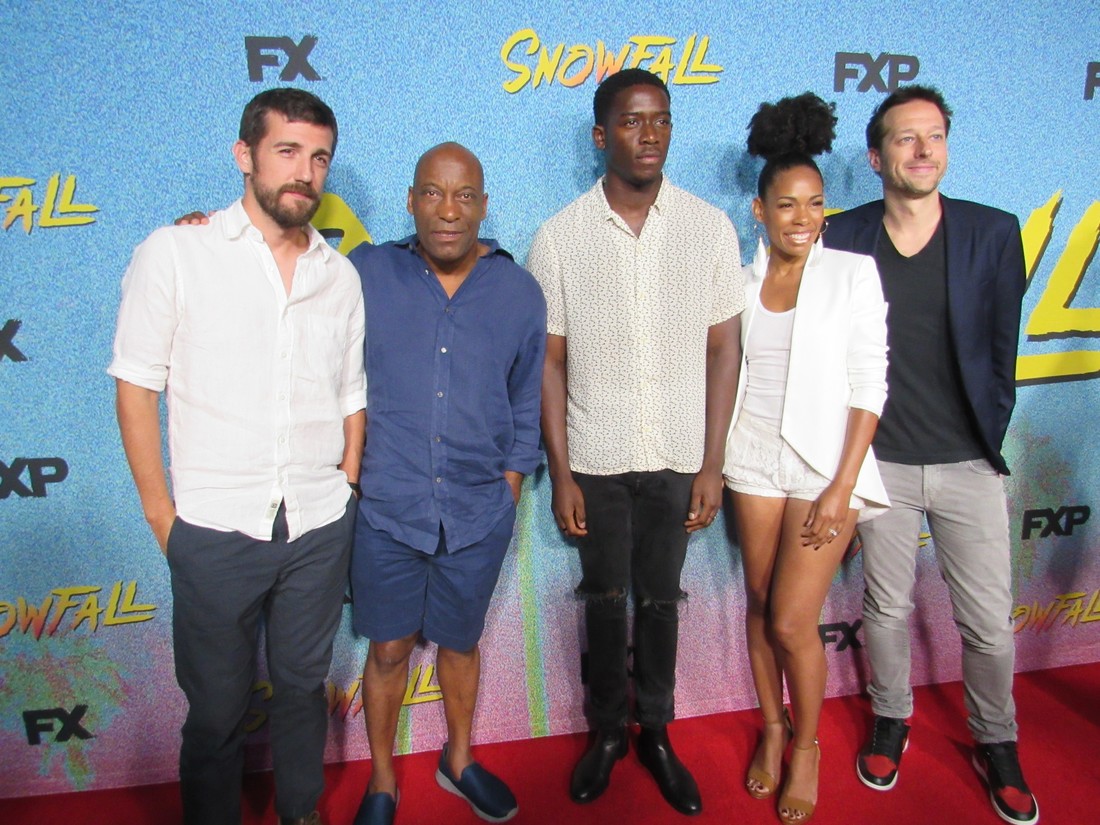 Snowfall is the American crime drama TV show on FX that was created by John Singleton. The series revolves around the first crack epidemic in the city of Los Angeles set in 1983.

JN: (Jerry Nunn) Hi, John. With the creation of the show Snowfall in the first place, what was the inspiration?

JS: (John Singleton) When I was thinking about television I was trying to think what could I do to make something unique. I wanted to make a show on what happened before crack hit the streets of LA.

JN: Did you feel pressure on making the second season?

JS: No. It was exciting because we had the success of the first season. We knew where we wanted to go.

JN: What do you want to tell fans about season two?

JS: This time it’s very intense and the ride gets more wild.

JN: Any thoughts on working with Janet Jackson on Poetic Justice?

JS: She is very beautiful, has a great heart and she eats popcorn sprinkled with hot sauce!

JN: As show runner, Dave, how long have you been involved with the show?

DA: (Dave Andron) There had been a short pilot that was written at the beginning, but I came on and rewrote it, so I have been on this show pretty much from the beginning. I am a creator but came in a little later.

JN: How is the second season compared to the first?

DA: I feel like I had a pretty good handle on the things we can improve on. I definitely set out to make it a little more streamlined and combined our storylines, which we were excited about.

JN: Was it great to have the gang back together again?

DA: It was so nice. There is no greater feeling than telling people we are able to have another season or no worse than saying we are cancelled. To have everyone back was wonderful.

JN: What do you want to tell people about the second season?

DA: It just pays off everything you have been waiting for. It’s funny, there’s heart. It’s sad and violent. It is really worth tuning in to.

JN: Did you have a favorite moment from creating  the new Knight Rider series?

DA: The fun of being asked. I had worked on one show the year before. NBC called and asked me to take a shot at it. It was something from my childhood. I was excited to take it on and tackle it. It was all downhill from there!

JN: You have performed since very young, Angela?

AL: (Angela Lewis) Yes. I always wanted to perform and do nothing else.

JN: How was being on The Big C?

AL: I had a really good time on that show. Everyone was really generous and lovely.

JN: Have you heard from the bisexual community about playing this character?

AL: I haven’t yet, but there is more to see and I will probably hear some things then.

JN: How has playing a bisexual on TV?

AL: It has been amazing. I watched Paris Is Burning. I had not seen that movie. I am so glad I saw it. It’s such an important story.

JN: Have you seen Pose on FX yet?

AL: I have not. I’ve been crazy doing this. I am excited to see it. We need that show!

JN: Talk about your character on Snowfall.

AL: Aunt Louis is Franklin’s wildcat aunt. She is a tough cookie, but very soft and sensitive on the inside. You will see more on season two. She made some boss moves last season and we will see it backfire on this season and how she will handle that. Louie is going places!

JN: She is very different than you as a person. Is that difficult?

AL: It is quite the opposite. Everything that is different about us is easier to let go and loose those inhibitions. I just commit and do it. It is the softer parts, the parts that are similar, that are harder to play where I am extremely vulnerable. I had a few meltdowns this season!

JN: What have you learned about being on Snowfall, Carter?

CH: (Carter Hudson) I have learned the ways that the CIA operates around the world and sometimes secretly here in the United States. I learned a lot about the history of the agency. It was eye opening stuff.

CH: Yes. Farsi, Hebrew, there was French for minute, but they decided against it because I couldn’t pull it off, a lot of languages. We have some great coaches that come and teach me how to do it.

JN: I went to Israel for the first time. That is not an easy language.

JN: I wrote a travel story there and went to the Mudbug Festival!

JN: They film many TV shows there.

CH: They have a lot of tax incentives to bring production down there. For a while it was really big. My grandmother is desperate for me to move home. She said,”I saw Julia Roberts at the Piggly Wiggly last week. She’s here so you should move home and work here!”

JN: What was it like voicing a video game?

CH: I did that a long time ago. It was fun. I blew my voice out with a lot of screaming. I was being shot!

JN: Doing anything fun in Chicago?

CH: We were here last year for the first season. Don’t tell the other cities but Chicago is my favorite. It is kind of like New York, but cleaner and people are friendlier. The architecture and lake is beautiful. It’s a pretty city.

JN: Was it hard to be cast on Snowfall?

DI: (Damson Idris) It was the hardest thing and wonderful because it was a huge test. There were rounds of trying to play Franklin. It took a lot of nerves away from me when it came to day one of filming.

JN: Was the second season easier?

DI: These scripts are constantly challenging. Thanks to writers like Dave Andron, John Singleton, Thomas Schlamme, constantly test me every day and stretch me as an actor to work on my craft to show different circumstances on the screen.

JN: Do you have a favorite actor to work with on Snowfall?

DI: My favorite actor to work with is Michael Hyatt, who plays my mom.

JN: Is she like a real mom to you?

JN: How does your family feel about your show?

DI: I am the youngest of six, single mom and they are so proud. They are all cheering me on back in London.

JN: Tell me about the nudity on the show. Did you have to wear the sock?

DI: [laughs] I did, because otherwise I would probably be me too-ed! I was petrified, but this is the world we live and the story we are telling. Thank god there is so much integrity in this story.

JN: It must be nice to distance yourself from the character with a completely different accent.

DI: It is. I am never going to play a Brit again!