The band AJR talks about growing up backstage

We love Chicago, so try to come back as much as possible. 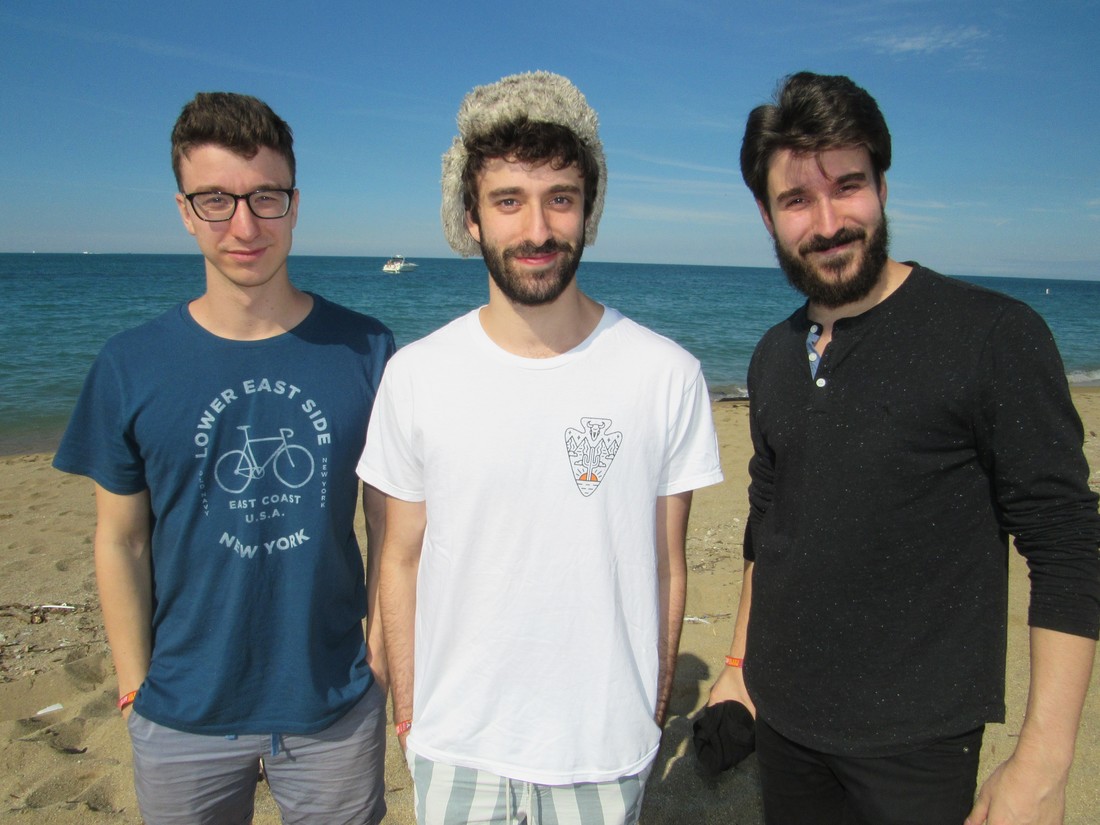 The pop band AJR is made up of three brothers named Adam, Jack and Ryan Met. Their songs are hitting the airwaves in a big way most notably with the single “Sober Up” featuring Weezer’s lead singer Rivers Cuomo.

Adam does vocals, bass guitar, Jack is lead vocals, guitar, ukulele, and Ryan does vocals, keyboards and they all play drums among other instruments.

The Click is their second studio album and has them touring around the world. The trio recently played at Mamby on the Beach in Chicago to a lively crowd and they spoke backstage about the current music.

JN: (Jerry Nunn) You are like the Jackson 3 or Haim but men. Did you always sing together as kids?

JM: (Jack Met) We started the band 13 years ago. We started out street perfuming in New York City, where we are from. The street performing culture is so big in New York and we love music so we thought that was a natural first step.

We took it to the streets trying to earn as much money as we could. We ended up making enough money to buy all of the music equipment we needed. We went back to our living room and made music there. We have been making music there ever since. Even the newest record was made in our living room with a mic and a piano.

I was eight years old when we did it and now I am 20. Ryan and I still live with our parents.

AM: (Adam Met) I am 24. We were al very young when we were street performing.

JN: Were you pushing them, Ryan, because you are older?

RM: No, actually our parents introduced us to a lot of music from the ‘50s and ‘60s growing up.  We were really inspired by The Beach Boys. They are our favorite band ever, also Simon & Garfunkel and The Beatles. Listening to those old records inspired us to do this on our own. It was really collaborative. The three of us wanted to go out and perform on the street.

AM: It references music a song on the album called “Come Hang Out.” It is the last song. The line is “should I go for more clicks this year or should I follow the click in my ear?” Basically is asking if we should sell out and do what people expect us to do to gain popularity quickly. Should we follow our own metronome and go with what we want to do?

That is the theme of the album.

JM: That was definitely the quickest song to write on the album. It kind of came out of nowhere. We sat down and wrote the whole thing in 20 minutes. I had the phrase “sober up” written in my phone. I thought about what it could be about.

A lot of the themes on the album are about longing to stay young and going back to the feeling of being younger. That is what “Sober Up” is about. We used that as a metaphor for staying young. Let’s go back to when times were simpler and “Sober Up.”

JN: How did you hook up with Rivers Cuomo?

AM: He direct messaged us on Twitter. He loved the song “Weak,” which was our single before that one. We are huge Weezer fans so we said thank you and asked if he would work with us. He said, “Yes.” We had the song finished up except for the bridge so we sent it over. That was it. We didn’t even meet him until after the album came out. It was done over email.

AM: There is a line in there that is lifted from “Sloop John B.”

RM: Which is funnily enough not a Beach Boys song. They did a cover of it. The line is “I feel so broke up, I want to go home,” which is why we didn’t have to pay The Beach Boys anything.

JN: How do you not cry when performing that song? It seems so personal.

AM: I cried a lot when I wrote it. It is cool to see fans connect to something that is risky to say that I miss my dad. It is rewarding going to these shows and seeing adults sing back to me those exact lyrics.

JN: You sing it a capella?

AM: Live we do it with piano but on the record we did with a vocoder. On the next tour we are going to find out how to do the vocoder live.

JN: Do you have a favorite Netflix show in reference to your song ‘Netflix Trip?”

AM: That song is about The Office so that is our absolute favorite.

JN: There is a sample of SpongeBob SquarePants on “I’m Ready.” Did you see the musical yet?

JM: We haven’t, but have heard amazing things.

JN: What is it like touring when you are brothers?

AM: It is very easy. People expect us to have terrible stories about getting in fights. It doesn’t really happen with us. We shared a room in a tiny apartment in New York City for 15 years, so it forced us to remain close. That is just how we are on the road.

JN: Are you protective when the fans get crazy?

JM: I think we expected that, but we don’t have a fanbase that is screaming at us. I feel like we try to stay on the same level as them so it is a very mutual friendship.

JN: How was it opening for Andy Grammer?

AM: That was a long time ago and when we first started touring. He’s a friend. Ryan wrote a couple of his singles like “Good to be Alive.”

We are doing The Click Tour Part Two in the fall. We did part one a few months ago and that completely sold out. We decided to do it again, but go bigger. We are coming to the Aragon Ballroom on Nov. 8. We have never been there. We love Chicago, so try to come back as much as possible.

JN: What is the next single?

AM: It is called “Burn the House Down.” That is AJR’s version of a political song.

JM: We were looking at this generation and the energy that is going on with Twitter. Kids our age are making political change totally separate than what is going on in The White House. We wrote the song about where a random 20 year old would fit into all of that.

JN: I like that is a whole album and not just a bunch of singles.

AM: Thank you. That is really important to us, to have a full body of work, that works together cohesively, not just a bunch of random songs that people know.