I am constantly hoping my son is gay. 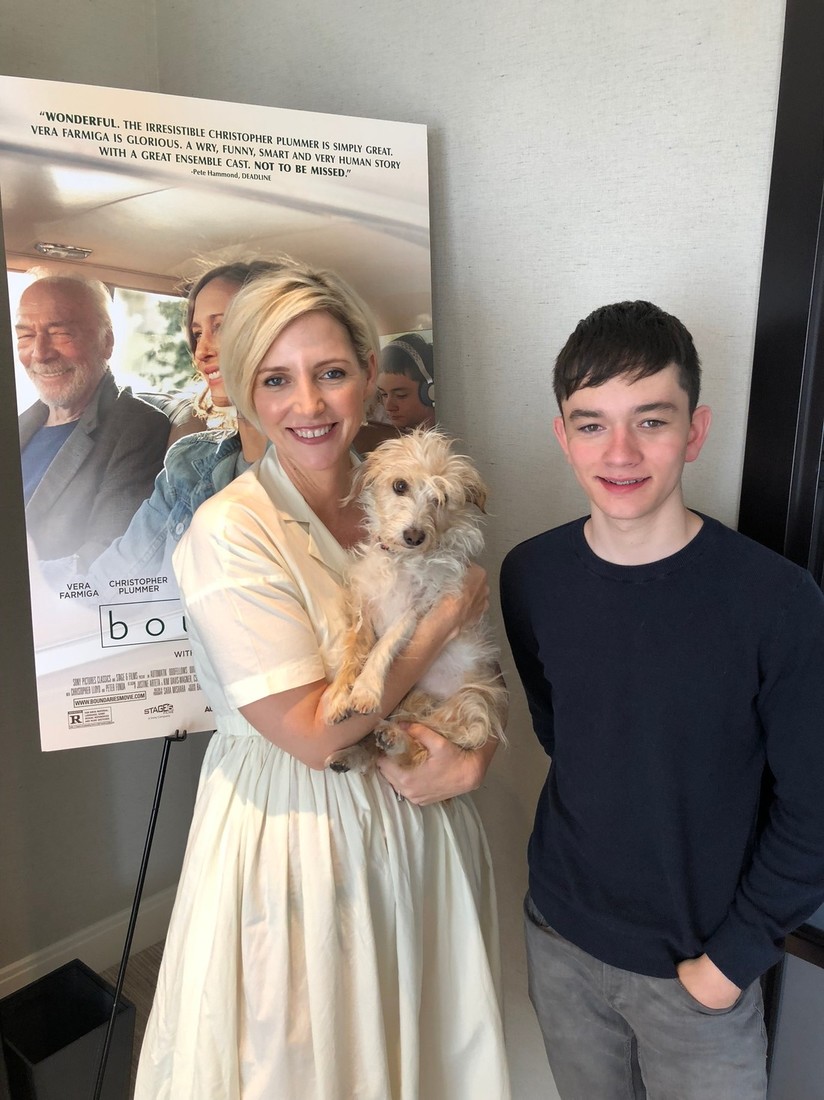 Boundaries is a new road trip movie starring Vera Farmiga, Christopher Plummer and Lewis MacDougall currently playing in theaters. It tells the story of a single mother with her son traveling from Portland to LA while dealing with her father after he is kicked out from his retirement home.

Scottish actor MacDougall plays Henry, the deeply troubled son in Boundaries and brings experience from the movies Pan and A Monster Calls to the table.

Feste, MacDougall and eight year old dog star Loretta all met up at their hotel in Chicago to talk about the project.

JN: (Jerry Nunn) Did you always want to be a director?

SF: (Shana Fest) I always wanted to, but didn’t have the courage to say it. When I was growing up it was Spielberg and Spike Lee. It was a lot of men.

I thought I would be an actress or a casting director. I studied producing at the American Film Institute. I was intimidated by the camera and the lights. I met the young directors at AFI that were around 23 years old and calling themselves directors out of the womb. When I saw them calling themselves directors then I knew I could call myself one. They don’t have anything that I don’t have!

That is when I made the decision to not give my writing away to other people. I am going to direct it. If anyone is going to mess it up it will be me!

JN: Did you always want to be an actor, Lewis?

LM: (Lewis MacDougall) I didn’t always want to be one. I went to a local drama group just for fun with my friends. They had an open audition for the first film I did, which was called Pan.

I was lucky enough to get a part in that. It all went from there really.

JN: With writing and direction is it a key thing to do both?

SF: When you are writing you are picturing it all in your head so it leaves clues to how you will ultimately direct it. When I get things that I haven’t written, I really need that personal connection. When you look at what you are going to direct the night before, you want to be excited about it. You want to feel you are the only one that can tell this story.

JN: What went into writing Boundaries?

SF: I wanted to explore my relationship with my father. It was really complicated. He was wildly charismatic.  He was married six times with six kids. Women, kids and animals loved him. He was in and out of my life, whether he was in prison or traveling.

I always wanted to have more of him and I never got enough. That made me think, “Why isn’t he here?” I spent a lifetime trying to figure that out.

Writing this film for me was very cathartic. I finally saw my father for who he really was and I accepted him after that. It was really important for me to do.

SF: Nothing like him, except in one major way. They both have a twinkle in their eye. If I told you about my father you would think I got the short stick. He doesn’t sound like a great dad, but if you met him and he started telling stories about smuggling diamonds out of Africa in the ‘60s and the adventures he went on, then you would fall in love with him.

There were two very conflicting things. I grew up with an antihero as a father. Of course I am a writer. I had to write about it.

SF: When I first made the movie I didn’t think I was. I wasn’t that self aware. But now definitely. She is an exaggerated version of me, especially the animals. I am a rescuer.

JN: How many do you have?

SF: Right now I only have five. I usually have more, but I have three kids all under four so that is enough for me right now.

JN: This is your dog?

SF: Yes. Loretta we had to put in the movie because we let go of one of the animals the first day. She was biting and scratching Lewis. I just happened to have Loretta with me because we were in Vancouver. I just wanted to try it and she was pretty great.

JN: Now she’s a star! It was her big break. How did you get in the movie, Lewis?

LM: I got asked to audition and that went well. Then I did a Skype call with Shana. I could see how much she cared about this story. I got the part but hadn’t met in person.

SF: We met for the first time on set in Vancouver when we were about to shoot, which is terrifying. I knew he was the one.

JN: What was the behind the scenes of working with this great cast?

SF: There was one day when Peter Fonda, Christopher Plummer, and Christopher Lloyd were all on the set at the same time sitting in director chairs. Everyone on set was covertly taking pictures of them. It was three icons, all together, on one day.

As a director I was incredibly intimidated. I was wondering how I would make Christopher Plummer’s performance better, but then they love what they do. He loves to act. Part of the process is being directed, so we were collaborators. He made it really fun. That smile on that movie poster is Chris.

Some of the best moments I got were after we stopped shooting. Our cast really loved each other and laughed a lot. Some of those unscripted moments made the film and were my favorites.

JN: I interviewed Vera before I loved her laugh.

JN: Did you love road trip movies like Thelma & Louise?

SF: Yes. Flirting with Disaster is one of my favorite movies. I grew up on road trips with my father from LA to Houston, Texas with my dad. Those are the times I had with my dad. He couldn’t escape the car. I knew I had three days with him and we would bond. Listening to country music the whole way, I had a romantic idea about road trips.

JN: What is the story behind the character of Henry possibly being gay?

SF: The jury is out on whether he is or isn’t. I think Laura wanted to support her son in however he was, whatever he wanted to do and was almost rooting for him to be gay so she could support him. She just wanted an extra reason so show him how much she loved him unconditionally.

It is also my own son. I am constantly hoping my son is gay. I love him so much and I want him to be happy. Maybe he is or maybe he isn’t, but it is just my way of telling him that I absolutely adore him.

JN: This is Pride month so good to hear this.

SF: My son is in love with his best friend, too, and nothing makes us happier.

LM: I think Henry is great. He’s very talented with his drawings. I really liked Henry and would like to hang out with him. At school he is going through hard times and doesn’t fit in. I think he’s a smart guy.

JN: Were you nervous around these big stars?

LM: I was at first, but we spent a lot of time together. We had a good relationship outside of shooting so we could appear very close on the set. I really liked working with them. I learned so much.

JN: Michael Penn did the music?

SF: Yes. I had watched the last season of Girls that he did. I was so taken by this tone that he did. It was unsentimental but emotional. I was happy he said yes and was lucky to work with him.

JN: What are you thoughts on women directors, Shana?

SF: It is amazing time to work. I am getting scripts I never would have gotten 10 years ago. I hope we are now getting the jobs. It is about time!