A lot of my fans both girls and guys have come out to me. 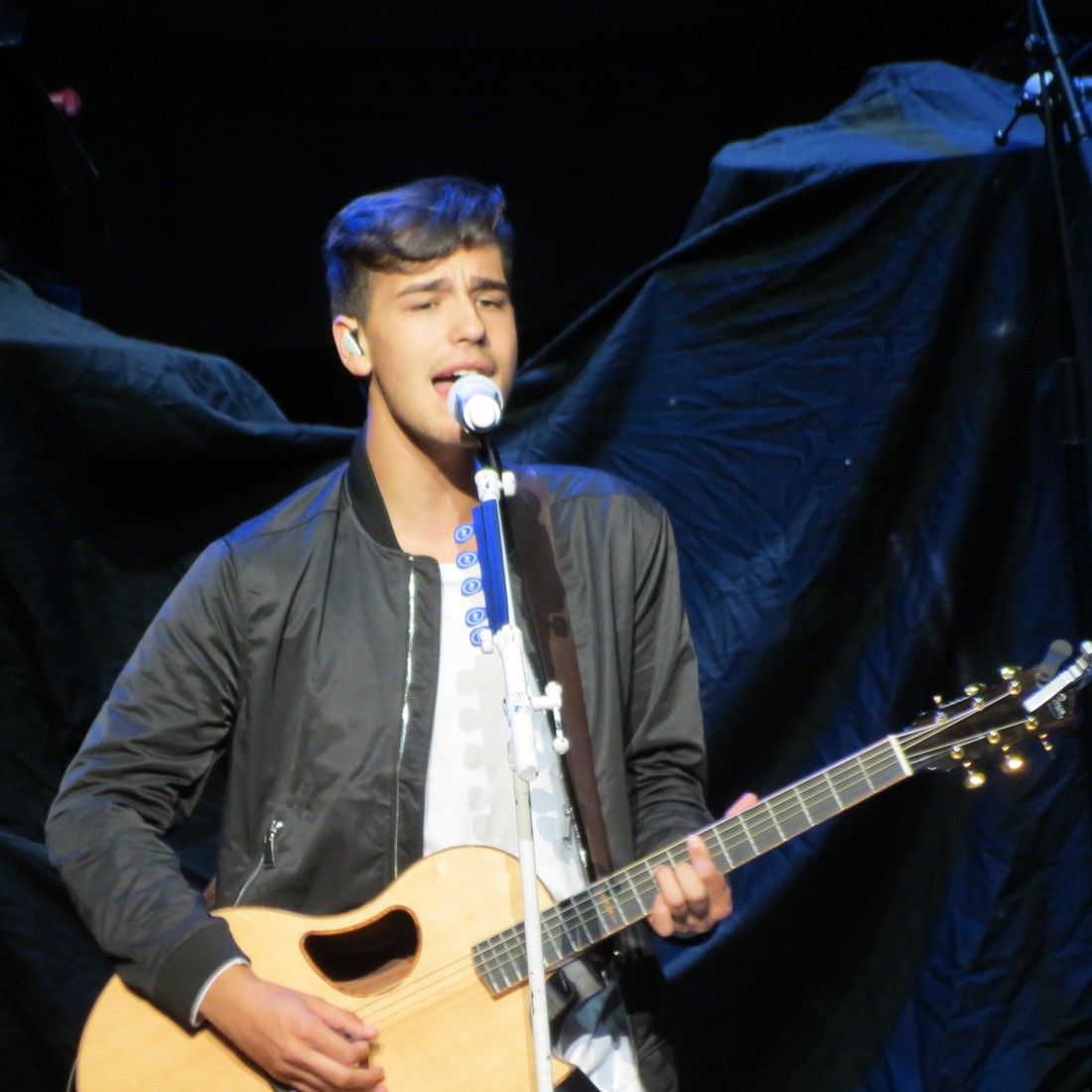 Singer Jacob Whitesides first became noticed on the competition television show The X Factor. He formed his own label Double U Records becoming the CEO. He released several EPs on the label. His debut album Why? came out recently and Spotify named him as an artist to watch.

Nunn went backstage to talk to the talented artist at the Chicago Theatre.

JN: (Jerry Nunn) Here we are at the historic Chicago Theatre.

JW: (Jacob Whitesides) I have heard how great it is. This is my first time.

JW: I am abnormally scared of ghosts.

JN: Did you always want to be singer?

JW: No. I was into sports from first grade until eighth grade. I played football, basketball, tennis and ran track. One time I was forced to go to a bluegrass festival concert. I wound up falling in love with music that day. The songwriting was out of this world. That was the first time I rememberer crying in public. It was a touching day so I decided to go a different route.

JW: No, but I would love to. I could bluegrass versions of all of my songs. I go to bluegrass concerts now but I just didn't have an appreciation for it when I was 13.

JN: I am thinking of Dolly Parton right now because she has a bluegrass album or two.

JW: She is phenomenal. She is actually from my hometown in Sevierville, Tennessee.

JN: Did you have a coat of many colors?

JW: No, but my mom’s mom went to school with Dolly.

JN: Have you been to Dollywood?

JW: A hundred million times. I get season passes every year, even when I am tour I go at least twice. They just released the fastest rollercoaster in the world.

JN: You originally came out of X Factor?

JW: That is kind of where I got my start. I didn’t get much exposure from the show but it was most first music type of thing that I did. It was an awesome learning experience. I watched the routes everyone took after they were off the show. I made mental notes as 14 year old that didn't know much about the music industry.

JN: I have questions on the side for Whitesides. Do you have a favorite musical?

JW: I have never seen a musical.

JN: Hamilton is right down the street!

JW: I was writing my album and my manager told me he had front row for Hamilton. I really want to go but I have never been in New York City or Chicago in a long enough amount of time.

JW: It is tie between Chipotle and Chick-fil-A. I live in walking distance of them both from where I live. I don’t have a car in Nashville so I just walk and alternate everyday.

JW: I am not home enough to drive so I just Uber it everywhere.

JN: Let’s talk about “Lovesick.” It is such a great song.

JW: Thank you. That is the first song we ever recorded on the album up in Connecticut. We talked about the vision for the record and decided on the sounds we wanted to do. We wanted to find the perfect mix between the bones of music I grew up listening to like John Mayer and Jame Taylor then mixing it with some new pop stuff.

The guys from Magic sent over a rough demo for “Lovesick” and we fell in love with it. We flew back to Nashville and flew them in from LA. We wrote a couple of other songs that made it on the album. It was my first time writing with a well known artist. It was a fun experience being able to hang out with them. They are Canadians and the nicest people.

JN: I me them on a red carpet and they were very nice. Why is your album called Why?

JW: At the time it was a question that I wasn’t asking myself enough. It was a reminder for me. I go through life doing so many different things all the time and I never question certain situations enough. I wanted to take a step back and be more self reflective for a couple of tracks on this album. The general vibe of the album is about all of the things going on in my life and in my relationships. Why sums it up and is a peak in the album.

I wanted to have a question mark in the title too [laughs].

JN: In the video for “Focus” was that confetti being thrown at your head?

JW: Yes. It was a feather confetti mix. It was homemade in the studio. That video was a blast. We did it really quick. We practiced it eight times all the way through. We tried to not make a mess on those takes. Then we did two actual takes. We got it on the first one.

It was all one shot and there was no editing on the effects. It was really challenging focusing on the camera the entire time. I don’t break eye contact.

JW: I snatched it.

JN: Were you scared?

JW: Deathly. That is why I wanted it so I could conquer a fear in the video. That was a 40 pound snake around my neck. It was scary but I enjoyed it once I did it a couple of times. The scariest part was holding it without moving at all. Once I got comfortable it was alright. Initially seeing it I was ready to throw up!

JN: “Open Book” is the latest single. What do you want people to know about you as an artist?

JW: I have been doing this for a hot minute. People may feel it is a quick thing. I know I am only 18 but I have been doing it since I was 13. Before I was playing in bars and doing open mic nights with my dad for a year and half straight. People may not know my side to that story. I started off before social media in ratchet bars.

JN: You weren’t even old enough to stay and drink.

JW: Absolutely not. I had to sneak in with a wig on!

JN: I saw you perform at Subterranean here in Chicago. People need to see you live because you put on a show.

JW: Thank you. That was my last tour but this one has new songs. The Chicago show was one of the first ones to sell out. The support here is unreal. Chicago is my favorite city. It is beautiful and clean.

JN: Girls go crazy over you.

JW: I don't know why. I haven’t figured it out.

JN: Lots of gay fans too.

JW: Yes. It is incredible and more and more so. I feel like they are getting more and more comfortable coming to my shows. A lot of my fans both girls and guys have come out to me. They bring their boyfriends and girlfriends to my shows. It makes me so happy. I feel like with social media it is making it so much easier for people to come out. I feel like people are more open minded with the Internet especially in smaller towns. Before it was only what people told you but now people can form their opinions out of their general little areas. It is making people come out about lots of different things. It has been wonderful helping people do that.

JN: We have to get you to play at some of our festivals.

JW: i have a little bit of social anxiety so festivals are intimidating.

JN: Not on stage, Jacob. You must hide it well.

JW: I feel more comfortable when it is just my fans. It is more reassuring. When I am opening for someone I feel more nervous. It has gotten better on this tour. It is older college kids. I am getting used to it because it is not a screaming kind of crowd.

JN: When are you coming back?

JW: I know I am doing Europe in February through March. I am trying to go to Australia and Asia. after that I should be doing either a headlining or co-headlining tour in the US after March.