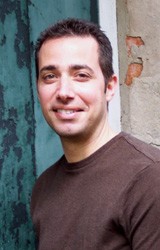 Salvatore Sapienza was born and raised in Howard Beach, an Italian-American neighborhood in Queens, New York. He lived just a few blocks away from John Gotti and family.

Sapienza attended Archbishop Molloy, an all-boys Catholic high school run by the Marist Brothers. Among his classmates were "Survivor's" Tom Westman and Jeffrey McGowan, author of Major Conflict, which details his life as a gay man in the U.S. military.

Sapienza then attended New York University. Among the students on campus were Bridget Fonda and Debra Messing. An NYU Scholar, Sapienza was featured in "Who's Who Among American College Students."

Upon graduation from NYU, Sapienza entered religious life as a Marist Brother, taking the vows of poverty, chastity, and obedience.

During his time in religious life, Sapienza helped in the formation of St. Francis AIDS Ministry under the guidance of Father Mychal Judge, the gay NYC fire chaplain who died on 9/11 and is the subject of the documentary "Saint of 9/11." The ministry was one of the first Catholic AIDS organizations in the country. Sapienza's remembrances of Father Judge will be included in the book "Remembering Father Mychal" to be edited by gay writer and activist, Brendan Fay.

After leaving religious life, Sapienza worked for the now-defunct Tower Air. His travels took him around the world from Russia to Greece to Japan and even to Somalia, where he helped bring troops home from Desert Storm.

As a writer, Sapienza has written several cover stories for "The Gay and Lesbian Times," mostly centered on gay literature. An in-depth interview with one of the founding fathers of gay literature, Felice Picano, inspired Sapienza to write his first novel, "Seventy Times Seven."

After several years of living in New Orleans, Sapienza evacuated his Bourbon Street apartment two days before Hurricane Katrina. He now resides in the gay resort town of Saugatuck on Lake Michigan, where he and his partner own the Beechwood Manor Inn. He is currently at work on his second novel, "Sitting Shiva."

PR: To be honest, when I first picked up Seventy Times Seven, I thought it would be about some closeted priest struggling with his sexuality, but it's not about that at all.

SS: I was so not interested in telling that story. Let's face it, it's been done. What I was interested in was exploring a young gay man's desire for incorporating spirituality into his life. For the main character, Vito, being gay is not the struggle. Trying to incorporate his sexual nature with his spiritual nature is the problem. The gay men he encounters denounce religion, just as the strongly as the church denounces them.

PR: At the beginning of the novel, Vito's life seems so extreme. He's at a sex club one minute and in church the next. He goes from dancing shirtless at the Roxy one night, to teaching Catholic school students the next morning. I really like how the pop culture references in the book relate to Vito's struggle.

SS: The book is set in 1992, and many of the popular artists at the time - Prince, Madonna, Depeche Mode, Sinead O'Connor - were juxtaposing sexuality and spirituality in their music. So, it's the perfect background for what Vito's going through in the novel. Those artists were pushing the nation's buttons, saying that yes, we are sexual beings, but we can also be spiritual beings. The two are not mutually exclusive.

PR: And, I should point out, although the topic sounds heavy, the novel itself is not.

SS: Well, thank you. Hey, with Wilson Phillips' "Hold On" playing a pivotal role in the novel, how heavy can it be, right? (laughs)

PR: Speaking of which, I really like the iTunes iMix on your website. That's something unique for a book.

SS: Music plays such an important role in Vito's life and is integral to the novel. Unfortunately, for royalty reasons, I was only allowed to use two lines per song. The iMix was a way to give readers the tunes in their entireties. All of the songs included are from the time period the novel is set, when many artists were combining sexuality and spirituality in their lyrics. I added two recent tunes, Robbie Williams' "Feel" and Ari Gold's "Bashert," because I listened to them at length while I was writing the novel. They were my muses. My two hot muses! (laughs).

PR: You came out at seventeen and lived the gay New York City lifestyle. What then made you decide to enter religious life and take the vows of poverty, chastity, and obedience?

SS: Like Vito, I was not some closet case entering the church so I could hide, although there were plenty of guys who did. I knew that God had made me gay, and I was open about it to my superiors before I entered the church. My decision to enter was based on two things: my dissatisfaction with the hedonistic gay life I was exposed to in Manhattan, and my desire to address the spiritual needs of the burgeoning AIDS crisis. I thought there had to be more to life than going clubbing, hitting the gym, and wearing the right clothes. And, let's face it, it wasn't a bad time for a young gay man to be celibate. I naively believed that I and the other forward-thinking men who joined with me could make a difference in bringing the church into the twenty-first century. Not surprisingly, most of us left after just a few years.

PR: What ultimately made you decide to leave the church?

SS: For the most part, I was faithful to my vows, but I was leading two lives, and I desperately prayed to be made whole. For some reason, I could not fully embrace either world. Everyone gay I knew rejected any notion of spirituality, and anything sexual - especially homosexual - was condemned by the church. The two lives were pulling at me from either end, and it was an unhealthy place for me to be. For the sake of my mental well-being, I had to choose. And, I chose to leave the church.

PR: What is your religious affiliation these days?

SS: I do have a great love for the Catholic Church, believe it or not. I still have friends who are priests, Brothers, and nuns, and they're healthy individuals doing great work. However, the current Pope's desire to rid the clergy of gay priests is so mean-spirited and quite the opposite of what Jesus instructed, that I can not in good conscience remain a Catholic. I suppose I'm a Christian, though, to the extent that I believe Jesus led an exemplary life worth imitating.

PR: There are many gay men for whom the idea of being gay and Christian seems oxymoronic.

SS: I can totally understand that. Most gay men who were raised Christian have so much hatred for organized religion, and rightfully so. Unfortunately, that's turned many gay men off from any type of spiritual life, and I think that's a shame. On the other hand, many of my gay friends in recent years have studied Buddhism or practice Kabbalah, so I think there's definitely a growing desire among us to connect with the spirit.

PR: How much of Seventy Times Seven is autobiographical?

SS: About half, but which half, I'm not going to tell you (laughs). I don't mean to be evasive. Much of what happens to Vito is based on what happened to me, but it would be inaccurate to call the book autobiographical. I liked the freedom of writing a novel, as I was able to create a cohesive and symbolic narrative, and one that, hopefully, readers will find engaging and thought-provoking.