Faith and hope: an interview with novelist Eric Charles May

For me, I didn’t feel like I was writing against anything, but I wanted to make sure that these characters, like all the other characters, are seen in the full width and breadth of their humanity. 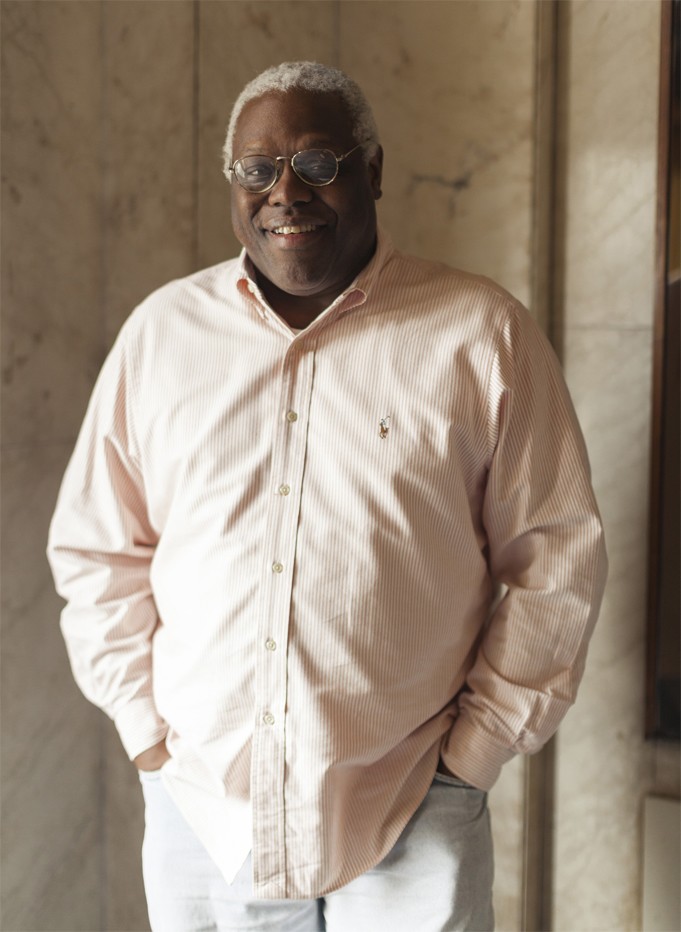 For his debut novel Bedrock Faith (Akashic, 2014), writer and educator Eric Charles May has assembled one of the most unforgettable casts of characters ever to appear between book covers. The neighbors of Parkland have known each other for years and have been involved in each other's business, for better or worse, for as long as anyone can remember. However, their idyllic early 1990s existence is disrupted when notorious bad seed "Stew Pot" Reeves is released from incarceration and moves back in with his mother. If he was trouble before, he's a different kind of nuisance now, armed this time with a bible and a newfound fervor. What follows is a kind of tragicomedy of the highest order, in which May paints a portrait of a peaceful community turned on its head, forever changing its inhabitants. Especially notable is the sensitive and insightful way that May, a straight man, portrays the LGBT characters in the novel. I spoke with May about his novel in early 2014. [Eric Charles May reads at 6 p.m. on March 20 at Metro in Chicago during Columbia College's Story Week.]

GS: (Gregg Shapiro) Eric, Bedrock Faith is set in 1993. Why did you choose to set it in that year?

ECM: (Eric Charles May) Because that was the one year of the 1990s where there was not an election in Illinois of some sort [laughs].The next year would have been the year of OJ (Simpson)…in other worlds, there were world events or statewide events, and Chicago is such a political town, I knew since I had an alderman as one of the characters, if it was an election year – I didn't want to have to start dealing with that.

GS: Religion plays a central role in Bedrock Faith. Were you raised in a religious household?

ECM: We went to church. My mom's 86 years old and she goes to church every Sunday. I'm 60 years old. My formative years were the 1950s, the early 1960s, when going to church was more the norm for the middle class than the exception. I grew up in Morgan Park. In the four block walk to my grade school, back in the days of neighborhood schools, I had to walk past four churches: Holy Cross, Mount Calvary, Beth Eden and Holy Name of Mary, and that didn't count the church my family attended, about a block south of the grade school. These were large churches, not corner churches. At the east of our block was another fairly large church. The area of Morgan Park where I came up has been a black neighborhood since it was prairie, south of 103rd and north of 115th, more or less east of Vincennes. There used to be a freight train line about a half block east of Aberdeen, which is the eastern border. There were white neighborhoods on three sides. For a long time, prairie grass grew to the south of 115th street. I still remember being a little boy and being able to look south and see nothing but long stretches of open fields.

GS: Do you consider yourself to be a person of faith today?

ECM: Yes, but my spiritual development…I won't say it's evolved…it's changed. I'd call myself more spiritual than religious. I go to the Bodhi Spiritual Center. One of the things I like about the place is that they don't ask you to check your previous religious or spiritual life at the door. They honor all paths. I was raised in a Christian house but that wasn't all that unusual. The kind of home I grew up in wasn't markedly different from that of my playmates that I had back then.

GS: Chicago is a city known for its neighborhoods, which have their own distinctive personalities. Would it be fair to say that Parkland is as much a character in Bedrock Faith as Stew Pot, Mrs. Motley and any of the other people in the book?

ECM: Yes. When you're working in fiction, or even non-fiction if you can get the documentation for it, there are perceptions that individual characters have. But there is also the group perception, what a group of people are thinking or how they are responding to something. In that sense, Parkland, as a group attitude is very much a part of what's happening in the novel. That story doesn't happen the way it happens if I had placed it someplace else, including Morgan Park. It's the sort of thing you find at the beginning of Toni Morrison's Sula. You also get some of that at the beginning of her novel Song of Solomon, how the attitudes of a particular street came to be named by the people of the town. In James Jones' The Thin Red Line, about an infantry company Charlie, he will often say, "C for Charlie thought this" or "C for Charlie thought that." As a fiction writer you're going into what the author perceives as a group perception about what's going on and it's an interesting way of giving the reader a wider sense of context or emotional context of the place where the story is happening.

GS: How much of Eric Charles May is in the characters, if at all, and is their one in particular to which you most closely relate?

ECM: When somebody asked Flaubert, "Who is Madame Bovary?" He answered, "I am Madame Bovary" [laughs]. I have some similarities with the people. I'm African-American and middle class. But I've never met anyone like Stew Pot in my life. Although the odd thing is that I've had some people tell me that they've known people like that. In terms of who I relate to the most, I like all of them. Even Stew Pot in his own weird completely goofy way. It's not a case of this character I love and this character I don't like for me as an author. I certainly understand Mrs. Motley. She's a woman of that generation – African-American, middle class, educated. This is my mother, my aunts, so many of the black women who taught me in grade school, the mothers of the kids I played with. There is a kind of African-American female aesthetic. If you read the narrative section of a novel such as The Narrows by Ann Petrie, which was published in 1953…when I first read that in the summer of '94, something I noticed right away is that I had heard this narrative tone before. Then I realized (I had heard it in) Toni Morrison, Gloria Naylor. I'm not saying they were copying Petrie, but I am saying that there is a sensibility of women coming up at that time.

GS: I'm glad you mentioned that because Bedrock Faith is populated with what I would describe as characters of certain age, well beyond middle age, who are an often underrepresented minority in fiction.

ECM: Yes! It was one of those odd things where you start writing a novel and you don't know what you're writing until you are well into it. I realized, about halfway into it, this is a novel about growing old. Realizing when you reach a certain age that some things cannot be undone, no matter how much you might want them to. Certain dies have been cast and how do you deal with that? Being older but still feeling like you want to have a life; not feeling like you never want to have anything for yourself anymore. The stereotype of an old person watching TV and never having any kind of emotional life. That doesn't stop because you pass a certain age.

GS: I think you do a good job of showing these people being alive and vital.

ECM: That was not in my head when I first started writing this. But that's where it went. Of course, it wasn't until I got towards the end that I realized that I was writing some version of Sense and Sensibility [laughs].

GS: One of the things that stood out to me about Bedrock Faith is the queer characters, such as Erma, Mr. McTeer's daughter in San Francisco and a third surprise character. Why did you include them in the book and why did you choose to portray them in the way that you did?

ECM: One of the things is that I knew that Stew Pot had to get into it with neighbors. You can't have Stew Pot doing something that leads to a neighbor's death as the first thing because then where do you go? But I wanted him to do something serious. I knew he was going to break up the Davenport's marriage, but that also didn't feel right to be the first thing. I was trying to think of what he could do that would be serious. What would be something that would get people's underwear knotted in a twist in a place such as Parkland? It would be if someone was gay. I already had Erma in the story. If somebody were to out somebody, who could it be? It didn't take me long to see that Erma was the best candidate for that. I knew that Stew Pot liked her and thought it would up the ante if he discovers that she's a lesbian. It was one of those things where you realize that it will make things work better in terms of the drama. Then it was a case of figuring how she would respond to him hassling her. We all know what it's like to be happy or embarrassed or angry – those things are experienced differently because of what your sexual orientation is.

GS: As a gay reader, I felt like you had a sensitivity that you don't often find in contemporary African-American lit. Do you see Bedrock Faith as an antidote for some of the more homophobic books by African-American writers and what is it that brought that about in you, personally?

ECM: My feeling is that you treat all characters humanely. It wasn't as a counter to anything out there, although I know what you're talking about. My cousin is (lesbian writer) April Sinclair, the author of Coffee Will Make You Black and Ain't Gonna Be The Same Fool Twice. For me, I didn't feel like I was writing against anything, but I wanted to make sure that these characters, like all the other characters, are seen in the full width and breadth of their humanity. The only way you can get a fully rounded character is to allow them to be fully rounded; to give the reader enough opportunities to see the characters in different aspects of themselves.

GS: There is currently a renaissance in African-American film. If there was a movie version of Bedrock Faith, how would you like it to be cast?

ECM: [Laughs] Like a lot of novelists, you think, "Well, gee, if it were made into a movie, who could be in it?" Of course, Dennis Lehane once said about movies made from novels and how they differ, that "One is an apple and the other is a giraffe." You think of Morgan Freeman for Alderman Paiger. Bill Cosby might be an interesting Mr. McTeer. Lonette McKee could be almost anybody in that book. There are a lot of good actors out there. I love movies and as an author I try to keep in mind that one is a very different animal from the other.