If we own it then they can’t mess with it. 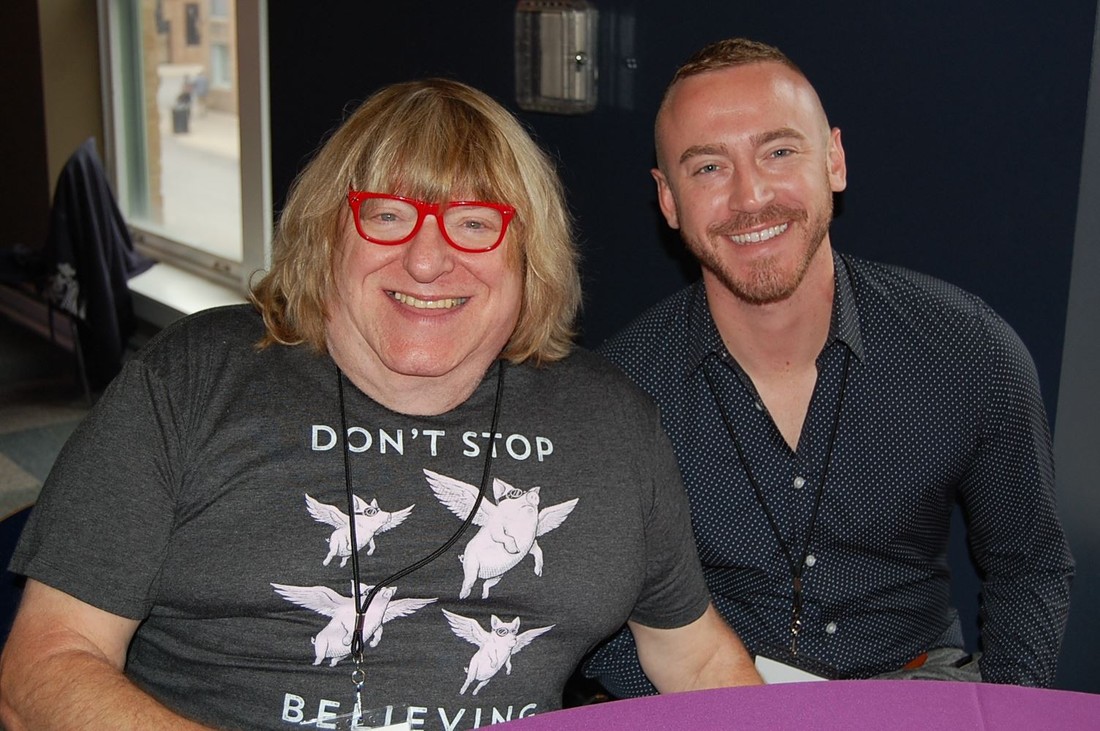 Bruce Vilanch went from a bathhouse bestie to a six time Emmy Award winner. Beginning as a Chicago Tribune writer he met a struggling singer named Bette Midler and began writing for her. This led to more writing gigs including the Academy Awards and many concerts.

He performed in an Off-Broadway one man show and on Broadway in the musical Hairspray. On TV he’s judged RuPaul’s Drag Race and starred in the third season of Celebrity Fit Club. In the movies he was the subject of a documentary Get Bruce! and the gay body image documentary The Adonis Factor.

JN: (Jerry Nunn) Hi, Bruce. Do you have a favorite new t-shirt?

BV: (Bruce Vilanch) I always like the ones that are current.

BV: Yes, it would say, “Like his hand is big enough to grab a pussy!”

JN: Are you glad to be back in Chicago?

BV: I love it here. When I lived here in the ‘70s there was no River North. The old Chicago that I loved is here.

This Legacy Walk is unique and something for people to do while they are here. It is important for all people to include it in their itinerary whether gay or straight. People come here for Market Days and IML from all over the world. It would be nice if they could sprinkle a little community awareness into the mix. It is in the middle of the party zone so they can’t avoid it. It will never be the Hollywood Walk of Fame but no one has anything like this.

JN: Talk about Vito Russo. I know he was good friends with Lily Tomlin.

BV: He stayed with Lily when he visited California. I met him through Bette Midler. He was an early fan and saw her at the baths. He got her to do early gay liberation things with him. This was all in the documentary that was about him.

He was a weird combination of activist and film critic. He wanted to recognize the role of gay people in the film business and how they were depicted. He was a pioneer. He was also a big party boy. He was a renaissance man!

JN: I remember when the trailer for Making Love came out and it was the first big gay movie.

BV: It was the first mainstream movie. There were lots of foreign and indie movies before that. At the time it was treated the only way it could have been treated, as a social issue. Hopefully we have come out of that.

When you watch Modern Family where it is one couple of a multiple couple family you realize that it is getting there.

JN: What is your opinion about gay movies these days?

BV: Now everyone can watch a movie on their telephone. We put them out there in the mainstream with film festivals but they are mostly lousy movies. I remember when La Cage aux Folles came out. It was shortly after Making Love. There was a big debate on how we want to be depicted, sensitive muscle men or old queens in drag? That is the community. We run the spectrum. No one is being dishonest. You have to learn to accept that is who we are. Not every Black woman is Diahann Carroll or every Black man is Sidney Poitier. There is a full range of humanity out there. We have to embrace it and own it. If we own it then they can’t mess with it.

JN: What do you think of the show Grace and Frankie?

BV: I love them. It is fun to watch. They are all friends of mine.

JN: Are you planning on watching Hairspray Live?

BV: Of course. I want to see what they do with it. Harvey has rewritten it and shortened it. It looks well cast. I think they are doing it more along the Grease model than The Sound of Music model, which is a good thing.

The stage show of Grease started here at Kingston Mines in Lincoln Park. I was the first one to write about it in 1970. I am very proud of that. I knew it would be bigger than Hair. The creators looked at me like I was out of my mind. It is the biggest thing ever and I said it would be.

The Grease that you see now has had a lot of the sting taken out of it, including the homophobia.

Here it was done in a high school space and we all sat on the floor of the gym on mats. During intermission they threw Twinkies into the crowd, candy not young boys! It was early interactive theater.

BV: Yes, kind of like what it became after the movie. It has evolved.

JN: What are you working on now?

BV: I wrote a musical, which we did in the summer in Connecticut. It with all of Petula Clark’s music from the ‘60s. It has an original book, so think Mamma Mia! We want that to happen again.

JN: I was just listening to Petula and thinking why hasn’t someone done a musical about her?

BV: It is not about her. I told her at a benefit about it and she said, “I hope it’s not about me because I am very boring.”

She is not Carole King or Frankie Valli. Her story is not that story. It is not dramatic. So we are using the music to tell another story like Mamma Mia!