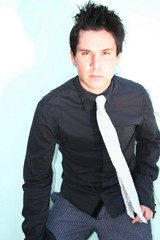 In the first part of this interview, I asked Kristoffer Cusick, who’s here for a year playing Fiyero in Wicked at the Oriental Theatre, how the reality of working as a professional New York stage actor compares with the general public’s perceptions of show

business glamour. His answer (only some of the time is it glamorous), jives with the types of stories told in a book called Making It on Broadway , in which a variety of chorus boys and girls as well as stars speak of the dark side of pursuing a career on the New York stage. For Cusick, a big step in making it on Broadway is happening to him in Chicago, having been promoted from ensemble member and understudy in Broadway’s Wicked to full-time Fiyero here.

We talked about his life in Chicago, the career implications of being an openly gay actor, and if he’s been able to venture past Randolph Street and the Oriental Theatre to sample social life anywhere near the vicinity of Halsted and Roscoe. One of the things occupying his offstage time is development of a cabaret act. I asked him if he’s planning to preview it in Chicago while he’s here.

KC: I want to, actually. I have some names of musical directors and musicians here. I have a general idea of how I want to do the show, now it’s just a matter of finding music. I’ve been really inspired by a friend of mine in a band called The Dan Band. They were in the movies Old School, this guy Dan Finnerty who was in Stomp, he’s married to Kathy Najimy. He put this band together that does all covers of songs by female bands from the 70s to the present. It’s a great hour show. I’ve also seen Ana Gasteyer’s cabaret act and my friend Marty Thomas who’s in Wicked in New York has a cabaret show of his own. All of these shows have inspired me to try and find out how I want to put together my show, so now I know the general idea of what I want to say and what I want to do. I may want to collaborate with somebody to write some original songs... I’m thinking about four sections of my life, using songs of the periods. It’s still in the process of being written.

I think Chicago would be a great place to work on it. I feel like the audiences here are a bit kinder and would let me work out the kinks in it before taking it to New York.

JO: How are you enjoying Chicago?

KC: I love it here. I lived here once before, in ’97-’98 when I was doing Rent. I’m originally from LA and I’ve lived in New York, and Chicago seems the best of all worlds. Like New York, I’m getting the feel of a big city. The nice thing here is you can walk down the street and I don’t feel as lonely here as I felt in New York. New York is one of the most exciting and vibrant cities in the world, but as many people as there are there, it can be one of the loneliest places in the world, because you’re just not seen. There are just so many people doing their own thing all the time. Here you have that LA mentality a little more. People are nice and friendly and want to get to know you and will talk to you. In New York no one talks to you. In LA, people talk to you too much and people think it’s so fake out there. Here, people are just friendly and open.

JO: Sometimes it’s harder to get Chicagoans to shut up than to get them to start talking to you.

KC: Well, I haven’t really noticed that either. I’ve really been happy. I haven’t been out as much I should. Everyone says the nightlife here is great. There was an event at Sidetrack with the casts of The Lion King and Little Shop of Horrors, so I’ve been there once, but other than that I haven’t gone out at all.

The producers of Wicked have been really supportive of me being out in my media interviews, in spite of having this matinee idol type of role. Some of the guys who have written to me through my website have asked how it is being out and an actor, and it’s been fun to answer those questions and give people an inside scoop. Not a lot of actors are out.

JO: It doesn’t seem to be as much of an issue in theater as it apparently is in film and TV.

KC: I think it is in theater, too. I do. I think that mostly it’s about being able to come in and do your job. If you are expected to play a role like Angel (in Rent) or you need to be believable playing a gay role, if a straight actor can’t do that, then they won’t be cast.

An example of a straight actor who could and did play a gay character convincingly was Hugh Jackman in The Boy from Oz. The reverse can be said of gay actors who play straight roles, like me. I feel like I do a really great job leaving who I am and my personal life at the door and going on stage and living this world for three hours and presenting a show. I don’t think there’s anything wrong with that. I think the money guys can sometimes get nervous. I think theater’s definitely a little more accepting.

JO: Such a big portion of the theater audience is gay to begin with. Or older, or very young.

They say a lot of teenagers are more accepting of gays.

KC: There was a big thing that was written about a month ago online going on and on about whether or not I was gay. I didn’t respond either way because I don’t need to fuel the fire, piss anybody off. It shouldn’t be important. But, being asked, I admire actors like my friend Chad Allen who have been able to come out and say this who I am. It shouldn’t matter, but unfortunately, like Rupert Everett said in an interview, he would never recommend anybody coming out if they wanted to be a huge movie star because it’s such a closed-minded area of the business.

JO: If that something you thought about?

Was there an official announcement? Did you ever come out in an interview?

KC: The first interview that I was actually asked and had to make a decision about whether or not to come out was for Scene Magazine. They asked me in the interview if I wanted to be out or say anything about being gay to our readers. I said, “first of all, this interview is about Wicked, but if you want to ask me about being a gay actor I’d be willing to talk to you forever about it so let’s set up another interview time for that. But as it pertains to Wicked and what I’m doing in the show, it really has nothing to do with my sexuality, so let’s just leave it at the door.”

I just decided that at age 31, I’ve been out to my family and my friends for over 10 years, and I just didn’t feel like hiding it. And if that means I’m not going to be the next Tom Cruise, which I never thought I was going to be to begin with, then so be it. I am still going to work my ass off in this business to have a great career.

I would love to work more in film and television and I know that those opportunities will present themselves when the time is right and when my sexual preference is not the deciding factor in getting those jobs. As for all the other jobs that don't come my way because of who I am or what my preferences are... well I don't think that they would be opportunities that I would be very happy pursuing anyhow... not if I have to pretend to be someone that I am not. I will save the pretending and the "acting" for the stage or the screen and let myself be ME in my real life.