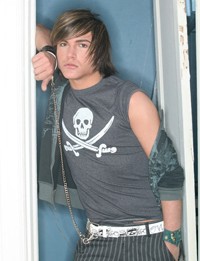 American Idol Finalist Jim Verraros is breaking away from the Idol stereotype with the release of his debut album on Koch Records.

The 22-year-old Crystal Lake native continues on a path to success as both an actor and singer. Verraros starred in the hit indie-flick Eating Out, in which he contributed three songs to the soundtrack. His indie-CD Unsaid & Understood, won an Out Music Award.

During Season One of American Idol (2002) and the national tour, Idol fans discovered Verraros is gay through his online journal he created while attending Columbia College. To date, Verraros is the only openly gay American Idol finalist. OUT Magazine named him one of 2002’s Most Intriguing People and later he came out nationally in the Advocate.

Verraros’ sexy new album, Rollercoaster, is produced and co-written by Gabe Lopez, with fellow American Idol finalist Angela Peel providing backup and lyrics on several of the cuts. "You Turn It On" entered the Billboard Dance Club Play Chart at #48. This week, the cut is now at #43.

Since his American Idol appearance and national outing, his life has truly been a Rollercoaster. Jim took a moment to talk to us about his debut album and life after American Idol.

CP: Now that the album, Rollercoaster, is being released. What are your thoughts?

JV: I'm nervous as all getout. It's going to be so difficult to prepare myself for people's thoughts and opinions on it especially since I've contributed so much to this record. But, I've learned that all I can do is put something out there that's really great, and continue to stay true to myself throughout this entire process. I want this record to do incredibly well, but also inspire and pave the way for other openly gay artists to follow in my footsteps. It's a fantastic record, and I couldn't be more proud of what I've accomplished. It's been a long time coming, but I think the people will agree that it's more than worth the wait. :-)

CP: What was the timeline for the CD?

JV: I started working on songs in June of 2003, ended up with about 35 tracks, and we narrowed it down to 11 for the final record. The record was complete in June of 2004.

JV: Very similar to George Michael… something he’d do if he’s 22 right now.

CP: I read somewhere that you consider yourself the anti-Clay Aiken?

I think he’s very much a cookie cutter image of what’s very safe, vanilla and that’s not really me. My album is nothing like Clay’s… mine is very sexy, very edgy and in your face. It’s something Clay would never really do. Not necessarily anti-Clay… it’s just not something he would not do.

I want to make it to the top doing it my way.

CP: Cookie cutter is really what American Idol is all about.

JV: That’s why I think I’m in an interesting position. I came in 9th and my image has really changed since I was first on the show. I’m coming out with a different image. I think a lot of people who do win… Kelly is the exception to the rule… record companies tend to box them into something that’s going to sale for sure. That’s not my thing, that’s not me. My record company loves my album and they get it. My record has everything… from rock, pop, dance… everything.

CP: A rollercoaster of musical stylings… is that the purpose behind the title?

JV: It's kind of a one-word title encompassing the ride that I've experienced in my life since American Idol. I've gone through so many exhilarating ups and devastating downs since the show, and I thought that "Rollercoaster" was the perfect title for the trip, so to speak. So many people use the term, "emotional rollercoaster," so I thought it summed my life up.

Not to mention that the album itself is a rollercoaster. It takes you through dancey upbeat songs and slows down to romantic, soulful ballads.

CP: Do you have a favorite song?

JV: I love the album as a whole; it's hard to pick a favorite. I like different tracks for different reasons. "Outside," because it tells the story of being gay bashed, but there's the positive light at the end of it. I love "You're Getting Crazy" simply because of the beat. I love "Hold On," because it's sentimental, romantic...there isn't a song on my record I'd skip over. Even with the songs I didn't have a hand in writing in, I connected to somehow, in some way.

Jim is currently in Los Angeles where he’ll perform at the Roxy on Sunset Boulevard for his CD release party on April 27th. Watch for Jim back in Chicago this summer!

Eating Out screened in Chicago last year as part of the Gay and Lesbian Film Festival. The gay comedy is now showing at the Landmark Century Centre.