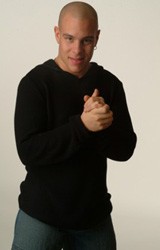 While most folks don’t want to work on their birthdays and even take a day off to celebrate the anniversary of causing their mother so much physical pain, DJs are the exact opposites. DJs see their birthdays as an opportunity to become the one and only master of the universe – that would be the dance floor before them - and don’t mind at all going to work, maybe even putting in a few extra hours.

A DJ’s birthday set is typically filled with tracks that give a fuller presentation of their musical personality, with old school gems amidst the current day’s playlist and possible surprise mini excursions into sub-genres they may not necessarily be known for. A dance floor is just about always guaranteed a wonderful time when a birthday-celebrating DJ is in the booth.

Thus, Chicagoans find themselves in the lucky and enviable position of having DJ Escape find his way to the Hydrate Nightclub DJ booth this Friday, January 14th as he celebrates another successful year of living on this place we call Earth. While 2004 was a banner year for him, highlighted by the critically acclaimed Bangin ‘03 Progressive Beats CD (buy CD) released this past summer on Tommy Boy Records, 2005 is aiming to be even better.

Escape has several remixes and another compilation scheduled for release and playdates that will have him rocking dance floors from coast to coast.

1. Where were you born? I was born in New York, and grew up in Bayside Queens.

2. How many brothers and sisters do you have? I have 2 step-sisters.

6. What was the worst non-DJing job you ever had? I’ve never had any other jobs.

7. At what age did you realize that DJing was more than just a passing fancy or hobby? 17

8. What was the first record you ever bought? I don’t remember but it was definitely a hip-hop record.

9. What was the last recent record you bought? “Morena” by Little Green Men on Forensic Records.

12. Off the top of your head, about how many vinyl records do you own? Tens of thousands

13. Other than NYC and Chicago, what’s your favorite American city? Miami

15. What’s the most exotic place you’ve ever visited? Brazil

17. What was your favorite dance track of 2004 that you weren’t involved with? “Easy As Life” by Deborah Cox

19. Name the one U.S. President you’d most like to sit down and have dinner with? Bill Clinton

You can find out more info about DJ Escape at his web site: www.djescape.com

DJ Joe Gauthreaux returns live and in-person to Hydrate for the first...