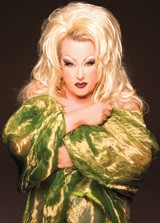 The first thing that comes to my mind after interviewing Chi Chi LaRue is “Minnesota Nice.”

That’s the phrase often expressed to describe the general pleasant and polite nature of citizens of the state of 10,000 lakes.

It’s also the perfect phrase to ascribe to its native son (or daughter depending on how you look at it), Ms. LaRue, the legendary drag queen director of gay adult videos.

LaRue may be coming up on 20 years out in Los Angeles, but the roots are firmly Midwestern.

CP: How did the Chi Chi LaRue persona come about?

CCLR: I became Chi Chi while living in Minneapolis, long before I went to L.A.

I was hosting drag shows up there and was fairly well known.

I was even in Prince’s movie “Purple Rain.”

While my speaking part ended up on the cutting room floor you can see me in a scene with Apollonia singing.

How did it all begin?

And so when I moved out to Los Angles back in 1986, I applied and got an office job at Catalina Video, a leading producer of all-male x-rated movies.

I was working with the legendary director William Higgins at the time and after six months on the job he gave me my first opportunity to direct.

I was hooked from then on.

What other studios have you worked for?

CCLR: After Catalina, I then went to work for In Hand followed by some time at Vivid.

I went back to Catalina and then after that I started a 15 year relationship with Falcon Videos.

What’s that all about?

Basically you can see guys “doing what they do best” either by themselves or with others.

And the cool thing is that subscribers to these sites can actually communicate with the models in real time and with each other in chat rooms.

The advent of high speed broadband internet connections has made this quite attractive to many folks.

CP: Now when I first heard about “Live and Raw” I thought it would be a barebacking site.

However, my understanding is that you are all about safe sex.

CCLR: Oh yes, anything associated with me will only be safe sex!

There may be a certain high level of raunch and piggishness with some of the things I’m doing - have you seen my Link series of movies? - but it’s always, always safe sex.

Back then, “raw” meant fresh and new.

There was this one guy in Chicago whom I met recently... it was huge!

How do you go about finding these boys?

Actually in most cases the boys find me.

A lot of times guys who are interested in getting into the business will come up to me or be referred to me by others who already know me.

It’s pretty well known that I treat folks well and with respect so more often than not guys will come to me.

Via my web sites I get 2 - 3 submissions a day from guys all over the world wanting to break into the business in front of the cameras.

Now I do still go out and make discoveries, especially when I travel.

There was this one guy in Chicago whom I met recently.

I nicknamed him “Circus C*ck” – it was just huge! – and I tried to entice him into doing some work for me.

I’ve made discoveries while perusing internet web sites as well as going to bars and clubs.

CP: You and Channel 1 Releasing have launched ProtectYourPorn.com.

Why are you taking such a political stand?

It is vital that we get everyone out there to vote and get this guy out of the White House.

CP: Do you have any favorite clubs or restaurants that are “must visit” while you’re visiting Chicago?

CCLR: My favorite places to eat are the Melrose restaurant – they make great egg white omelets - and Cornelia’s.

The pork chops at Cornelia’s are great.

And I also like that they stuff their olives with blue cheese for the martinis.

I love shopping at Beatnix and always stop by Gentry and Lucky Horseshoe when I’m in town.

CP: You are a very busy person with so manythings going on.

Do you ever get a chance to relax?

CCLR: Actually I am about to go on a much needed vacation to Europe.

I’m very excited as I’ll be in Paris and Berlin, two of my favorite cities.

She’ll have lots of boys with her for the “Big Gay Labor Day Blowout!” (Event Details) ChicagoPride.com Members get discounted admission for the holiday weekend (sign up every week at http://www.chicagopride.com/vip)