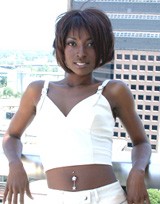 On Pride Sunday at Sound-Bar the special guest performer bridging the T-Dance to the late night activities was Trenyce of American Idol fame.

This petite beautiful woman with a loud wonderful singing voice belted out two numbers – including a rendition of “Chain of Fools” that Aretha herself would have been proud of – for the appreciative crowd.

I met up with Trenyce after her performance for a ChicagoPride.com “Quick Chat.”

Is that a bit if a Southern accent I hear along with the word “y’all” coming out of your mouth?

Not the deep South, but south enough.

Is this your first time to Chicago?

I was here just recently in the cast of “Not A Day Goes By,” the play by E. Lynn

Now, for those folks who aren’t America Idol savvy, in which year did you compete?
Trenyce:

I was on the show last year; the second season for America Idol.

The one with Reuben Studdard, Clay Aiken, and Kimberly Locke?

You must be pretty impressed with the success your Idol-mates are having with their recent album releases.

And Reuben is such a good friend of mine.

I am so happy for him.

To make it viewer-friendly, the producers of America Idol obviously edit the process of auditioning and getting onto the show.

I had to travel from my home in Memphis to Nashville for the first audition.

After that initial success, by the time I was chosen to be in the final group that was on the televised show I had a total of eight auditions.

There’s a lot more that goes into getting on the show than most people know about.

Ok, so your class of Idol-mates is storming the record charts.

When can we expect an album from you showcasing that incredible gift of a voice you have?

I have a CD coming out next year, but in the meantime you’ll be seeing me in an upcoming movie.

More details about that to come out soon.

And with that bit of a tease and me wanting more info, Trenyce was swept away to her hotel.

A vivacious, warm and talented woman, I expect that the next time Trenyce graces Chicago with her presences she’ll be talking plenty about her CDs, movies, and much more!