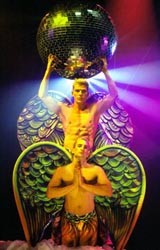 Riding the wave of popularity of its Queer As Folk cable television series, Showtime Networks and Embrace Productions will be launching the Queer As Folk - Future Babylon Tour this spring and summer. The plan is to simulate a futuristic Babylon, the popular onscreen nightclub in Queer as Folk (QAF), in each of the 18 North American cities on the Tour.

While DJs Peter Rauhofer, Tracy Young, and Manny Lehman will be the rotating musical maestros, the task of developing the futuristic decor and design of the Tour has been given to Miami's own Future Boys, Rubio and Kidd Madonny, of RKM Design and Production.

They will also be treating audiences to cutting-edge dance performances.

They've even performed in Tokyo on several occasions.

As the QAF – Future Babylon Tour has its first stop in Chicago next month, ChicagoPride.com wanted to find out some more pertinent information about the duo that makes up RKM.

They were kind enough to do the following interview with us.

CP: You two have been fixtures on the Circuit scene for several years.

However, the QAF Future Babylon Tour will be attracting a broader audience, some of whom may not be familiar with who you are and what you typically do.

So for the novices out there, how would you describe RKM.

RKM: We're two performers, who come up with there own original designs and concept for their shows. Our shows are very visual and quite the pieces of eye-candy. You can say we're an adult Disney show on acid. We've been told we're the gay version of Rabbit in the Moon.

CP: How did you two meet - was it really on the set of a movie?

And when did your collaborative artistic efforts begin?

We met on the set of "Birdcage" as G-stringed roller-blading extras. We we're both go-go dancing at the time, and then we got tired of the bars and wanted to take our performances to the next level.

CP: RKM is known for its elaborate and ornate costumes.

Is it just the two of you who come up with the design ideas and then create them?

Or are there other "team members" of RKM like a graphic artists, a seamstress, a carpenter, etc.?

RKM: We work together to come up with designs, bouncing ideas back and forth until the final product is done. We have a seamstress who helps sew our designs and an airbrush artist that paints all of our ideas on our costumes and props.

CP: Do you two have any formal training in design, dance, acting, or gymnastics?

RKM: Rubio has theatre and music training. Kidd has dance, gymnastic and music as well. We're looking next to work on vocal training.

CP: Of all the performances and appearances that you have had over the years, is there one specific performance that stands out in your mind?

RKM: There so many shows that stick in our minds, but one in particular was in New York City at the club Twilo during Pride.

It was about three o'clock in the afternoon and the place is packed.

We we're on platforms across from each other on the dance floor doing this trippy geisha show with wigs flowing all the way down to the floor.

Junior Vasquez was DJing and working us to the bone with all these beats, and little by little our clothes were coming off. Then the music drops and we're standing there naked with these long wigs.

Junior kicks in his new remix to Cindy Lauper's

and we perform it to each other. When we were done the crowd went insane.

CP: How did the partnership between RKM and the QAF - Future Babylon Tour come about?

RKM: They came to us last year during the first QAF tour, and we did a couple of dates. They wanted us back again this year for the entire Tour.

We were excited but wanted to take the Tour to the next level in terms of visuals, by doing this next big installation.

CP: The many viewers of QAF know what Babylon looks like on the show and what it's all about. This Tour, however, seeks to create a Babylon club of the future in the year 2050.

Thus, without giving away too many of the specific surprises that you have in store, what general visual and design elements should we look for?

RKM: All we can say is that it's going to feel like you are dancing in a club of the future.

CP: In terms of your involvement, did you assist in the development of the overall design concepts and decorations that will be seen throughout the venues? Or were the concepts already developed by others and RKM hired to execute the plans?

RKM: This project was great because they gave us creative control to come up with the designs of the tour, so it made it lots of fun to come up with the things we are using. Also we had to make sure it was all able to travel on the plane, so we had to design big props, but be able to fit it in our seven big body bags that we're traveling with. They asked us to use certain colors and brand the sponsors. So even the sponsors are incorporated in the decor so it all matches.

CP: While the DJs on the Tour will rotate amongst Tracy Young, Manny Lehman and Peter Rauhofer, will RKM be performing at each Tour stop in addition to coordinating the design and visual effects?

RKM: Yes we created a Future Babylon show that will fit with the decor visuals, and that will be done in every city.

CP: Has RKM performed in Chicago before?

RKM: Yes, on several occasions at Circuit Nightclub, Transit Club, Karma, and Crobar Chicago before the renovations. We can't wait to see what they have done to the newly renovated Crobar.

CP: What is your ultimate goal with the QAF Future Babylon Tour?

What do you hope party-goers will say afterwards about their experience at the party?

RKM: We'd really like to take the tour worldwide. As for the party-geors in each city, we want them all to leave satisfied and wanting more for next year's tour.

CP: While this Tour will keep you busy throughout the summer, what other projects is RKM involved with?

RKM: We promote a party in Miami called Blow which will now be a monthly event because we'll be busy touring with the QAF Tour. Our next big BLOW

out won't occur until July or August. It's going to be our 9th Year Anniversary of being together as RKM and so it's time to CELEBRATE!!

Before we arrive in Chicago we'll be flying in from Tokyo, where we'll be performing with Junior Vasquez. We have lots of things planned for after the tour with Junior in Miami and NYC, but we don't want to jinx it so we're going to keep quiet about those details. Also we just found out the Future Babylon Tour is going to Prague in September for Mr. Circuit. Also we do a lot of stuff for the corporate world, like decorating for special events. And when we aren't working, we're creating and coming up with new stuff to premier.

You can check out RKM's design and décor creations for the Future Babylon Tour when it kicks off in Chicago. Presented by Circuit MOM and Crobar Chicago, DJ Tracy Young will headlining the night on Sunday, May 2, 2004 at Crobar. Tickets, available at Universal Gear and through Ticketmaster, are $20 in advance.