I’ve been saying that Meet Me Halfway is both a love letter and a mugshot. 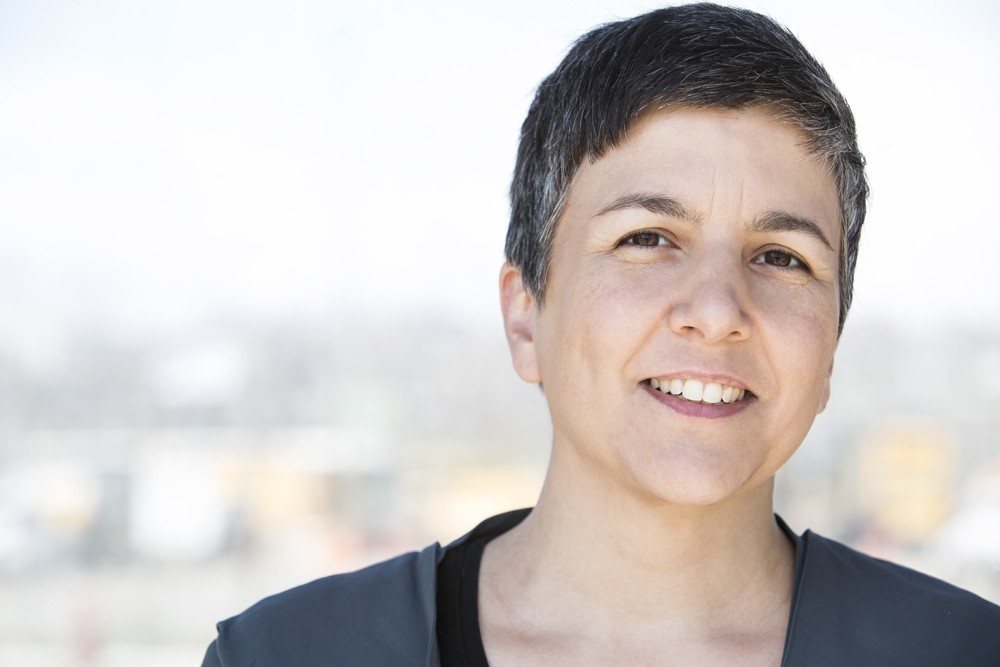 Meet Me Halfway (University of Wisconsin Press, 2015), the fiction debut by Jennifer Morales is subtitled “Milwaukee Stories.” Because of that, Milwaukee is as much a character in the book as high school students Johnquell and Taquan, Johnquell’s mother Gloria and his aunt Bee-Bee, elderly Frances and Mrs. Czernicki, dedicated teacher Mrs. Charles, or any of the people who populate Morales’ stories. Most of the stories are set in present-day Milwaukee, although “Prelude to a Revolution” takes us back to the late 1960s, setting the tone for racially divided city of today. I spoke with Jennifer in April 2014 before she embarked on a book tour for Meet Me Halfway. [Morales reads from and signs Meet Me Halfway in Chicago on Apr. 18 at Powell’s University Village and Apr. 19 at 57th Street Books.]

Gregg Shapiro: The format of Meet Me Halfway is linked stories, with different narrators. Why did you choose that configuration as opposed to framing it as a straightforward novel?

Jennifer Morales: I came to fiction writing after many years of writing poetry, so I think my natural tendency is writing in shorter forms. After writing “Heavy Lifting,” the first story in Meet Me Halfway, I felt compelled to try to bring in a wide range of Milwaukee voices. I kept asking, “Who does the character in the last story need to encounter in the next one?” I wanted to show the diversity of the city and the many ways that people interact — for better or for worse — across group boundaries in a deeply divided place.

GS: You said that you wrote “Heavy Lifting” first. What was the inspiration for the story?

JM: The long answer about the inspiration for the story comes from my 23 years living in hyper-segregated Milwaukee. I came from a racially mixed family in the Chicago area and had a diverse group of friends, so I was absolutely shocked to see how sharply segregated my new home town was. In Milwaukee I served on the city’s school board and was active in community causes, as well as being a mom to a diverse bunch of kids, a writer-in-the-schools, and a middle-school Sunday school teacher, so I got to know many young people and see their struggles with the city’s racial legacy first-hand. As an elected official trying to convince senior citizens to raise their own property taxes to support the schools, I also got to hear the voices of many of the city’s elders.

From all that history, you get the short answer: I was lying on my couch one day after getting back from an exhausting MFA in Creative Writing residency and noticed my bookshelf was leaning and probably should be moved. Even though I hadn’t been able to write anything for a week, I suddenly stood up, grabbed my laptop, and wrote the first half of “Heavy Lifting,” about a black Milwaukee teen moving a bookcase for his elderly white neighbor. I don’t know where Johnquell and Mrs. Czernicki came from, but they popped into my head and threw me off the couch, so I knew I had to write their story down.

GS: How did you know that you wanted to develop the characters into a full-length book?

JM: It’s really simple: I fell in love with my characters and I wanted to know more about their lives. I kept wondering about people who played minor roles in one story — What would they do in their own story? What are they like? What do they need to learn? — and then, next thing I knew, I’d be off writing another one. Gloria’s story (“Misdirected”), about the aftermath of her son’s death, came to me last. Gloria resisted “giving” me a story for a year and a half after the other stories were done. I don’t blame her, since I killed her child [laughs].

GS: Teachers, from opposite ends of the spectrum, play a prominent role in Meet Me Halfway. There’s Mrs. Charles, a teacher who offers her students respect and support, and then there’s Stu, aka Mr. Discharge, who isn’t the most nurturing of educators. As someone who is a teacher herself, what can you tell me about your approach to writing about teachers?

JM: Teachers are my heroes. Although I teach writing workshops, I have never been a full-time classroom teacher. Those who do that job day after day, year after year in the K-12 schools have my deepest respect and gratitude. That said, teachers are human, too. They can be jerks and bigots and sometimes fail to understand their students. I wanted to reflect the full range — from the astute, caring, almost super-human ones, to the pompous, discriminatory examples.

As a former school board member, public school parent, and education researcher, I’ve had a lot of opportunities to see teachers in action, but the Stu character is based on an experience I had as a student. Stu is modeled on a racist substitute teacher I was subjected to in my high school history class — a class normally taught by a teacher I practically worshipped. He also was a Vietnam vet, like Stu, and used that status to bully us into parroting his version of U.S. history.

GS: You make use of dialect, in “Pressing On” and “Fragging,” for example.

JM: My characters speak a range of Milwaukee “Englishes.” There’s Frances, who speaks South Side white Milwaukee-ese, and Netania, who is a native English speaker whose language is inflected by her parents’ Mexican Spanish. And there are several black characters who speak different Milwaukee variations on African American Vernacular English (AAVE, sometimes called Ebonics), depending on their situation, age, and social class. There are also black characters who speak what linguists call Edited English — the language of the white professional class. I wanted to represent all those voices because I love language and I have had close relationships with people who speak each of these Milwaukee dialects.

“Fragging” deals explicitly with the clash of cultures that different forms of English can provoke. Johnquell has a conflict with Stu, the substitute, over his use of what Stu calls “gangster” English. But Johnquell is capable of speaking multiple English dialects. His school friend Taquan comes from a working-class black/Puerto Rican home and he speaks a deeper AAVE that is also influenced by his mom’s native Spanish.

I tried to use my years of working with Milwaukeeans of all colors and cultures to present each dialect with great respect. Everyone’s home language deserves to honored and heard with care because that’s our heart language — the language our families talk to us in, the language we first heard our names spoken in.

One of the reasons that I saved “Pressing On” — Taquan’s story — for last is because I think many middle-class white readers will be challenged by his voice. I wanted them to be invested in the series of stories before getting to Taquan, so that they take the time to hear him and see him for the funny, resilient, good-hearted kid that he is and root for him to succeed.

GS: What can you tell me about the queer characters in Meet Me Halfway, including Netania and Aunt Bee-Bee?

JM: As a queer woman, I felt it was really important to include some kind of LGBT storyline in a book about inter-group relations and I managed to build in two: “Menudo,” which is about Bee-Bee surprising herself by falling in love with Netania, and “Misdirected,” in which Gloria meets an older lesbian who tells her a painful story about gay life in Milwaukee in the early 1960s. There is another gay character, the quiet but not closeted Theo, in “That’s the Way Cats Are.” He’s a gay man navigating life as a single senior citizen and doing pretty well.

In a place that struggles with racism as much as Milwaukee does, other forms of discrimination can be pushed to the background but we have to combat all types of oppression simultaneously. Both “Menudo” and “Misdirected” get at those intersections, by touching on racism as well as queer issues.

GS: Milwaukee is not a city that has made its way into much contemporary popular or literary fiction. What would it mean to you if Meet Me Halfway changed that?

JM: Well, I’ve been saying that Meet Me Halfway is both a love letter and a mugshot [laughs]. Milwaukee is an amazing place and I wanted to show how much diversity, brilliance, resilience and energy there are in its people. On the other hand, I also felt like I needed to capture some of the ways racism infects daily life in the city and challenge Milwaukeeans to change. So, the stories come across as both a paean and an indictment, and that’s how I feel about the place — “You’re wonderful, now change.” That said, I don’t want people who haven’t lived there to criticize Milwaukee! I think I’m like my big sister who says, “Nobody can pick on my sister but me.”

GS: After 23 years in Milwaukee, you have relocated to Viroqua. What will you miss most about Milwaukee?

JM: I’ve been living in rural Wisconsin now for about a year and I know what I miss: the people. Viroqua has its forms of diversity — there are dairy farmers who have been here for generations, Amish folks, artists and back-to-the-landers, with a scattering of people of color — but it’s not the kind of energetic mix you find in a big city. I miss the range of voices and cultures and the way my world shifts when those voices and cultures bump up against each other and sometimes blend.